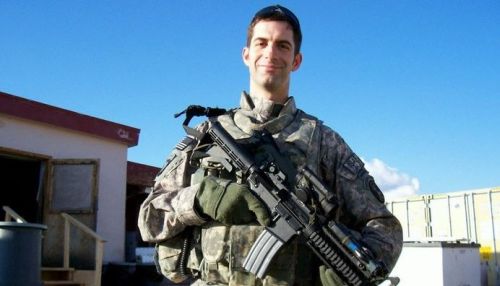 Tom Cotton, whose “letter” informing Iran that any binding agreement between Iran and the US would have to be approved by Congress got the young Senator slandered as a “traitor.”

The President accused the GOP signees of the “letter” of “making cause” with the hardliners in Iran. The GOP Senators do not want Iran to have nuclear weapons while Obama is most willing to allow it.

Either through befuddlement or deceit, many of the Republicans’ detractors have echoed this gross inaccuracy.

– A Slate column by Fred Kaplan last Tuesday bore this sub-headline: “The letter 47 Republican senators sent to Iran is one of the most plainly stupid things a group of senators has ever done.”
– According to the Washington Post, “47 Republican senators sent a letter to leaders in Tehran saying that any agreement reached between Obama and Iran without the approval of Congress could be revoked by the next president.”
– A citizen petition posted on the White House’s public-participation webpage demands that the federal government “File charges of treason against the 47 Senators who sent letter to Iran.”
– No less a conservative luminary than Michael Reagan wrote in last Thursday’s Newsmax.com: “Those 47 Republican senators didn’t need to send a public letter to Tehran to remind the Iranians how America’s separation of powers works.”

Even Obama got into the act:

“You don’t diminish your office by taking a selfie. You do it by sending a poorly written letter to Iran.”

Yeah, you do, but we’ll get back to that later.

Cotton didn’t send anyone a letter.

“Because it was an open letter, it was not sent to Tehran but rather posted on Senator Cotton’s website and social-media accounts,” Caroline Rabbitt, Senator Cotton’s communications director, explained to me last week. Cotton & Co. never even dropped an envelope in the mail.

Ironically, democrats in Senate, while feigning all sorts of outrage, vindicate Cotton:

Even as the White House ramps up pressure on Congress to stay out of its negotiations with Iran on a nuclear agreement, Republicans are on the brink of veto-proof majorities for legislation that could undercut any deal.

And that support has held up even after the uproar last week over the GOP’s letter to Iranian leaders warning against an agreement.

Though several Democratic senators told POLITICO they were offended by the missive authored by Sen. Tom Cotton (R-Ark.), none of them said it would cause them to drop their support for bills to impose new sanctions on Iran or give Congress review power over a nuclear deal.

Even someone smart enough to become a democrat Senator doesn’t seem to understand what Cotton did:

Psst, Senator- it wasn’t a letter but you are doing the right thing.

Now back to Obama’s words.

“You don’t diminish your office by taking a selfie. You do it by sending a poorly written letter to Iran.”

When the President of the United States, who spends his mornings watching ESPN and his afternoons on the linx, who longs to exercise his comedic talents on late night talk shows and burns an ungodly amount of fuel and produces a gross amount of pollution solely for frivolity, makes completely stupid faces in selfies- yes it absolutely diminishes the office of the President of the United States.

Apparently Obama doesn’t know what a letter is either. I guess ESPN didn’t cover it. Senate democrats are going to vote with the “traitor.” Obama?

describe the document sent to Iran,

There was no document sent to Iran. Only posted on a web site.

words were put to paper and sent off to the Iranian government, plain and simple,

“The Senate does not ratify treaties—the Senate approves or rejects a resolution of ratification.

yeah, you got one thing correct so far. but if they don’t approve that resolution, then there is NO treaty.

Most often, the Senate has simply not voted on treaties that its leadership deemed not to have sufficient support within the Senate for approval, and in general these treaties have eventually been withdrawn. At least 85 treaties were eventually withdrawn

If the senate fails to even vote, you don’t consider that a rejection? Strange. It’s sure not approved.

Republican traitors should be shot. Isn’t that what we do to traitors?
…I’d be more than happy to help take out the garbage!

Login
wpDiscuz
102
0
Would love your thoughts, please comment.x
()
x
| Reply
‹ Back to Categories