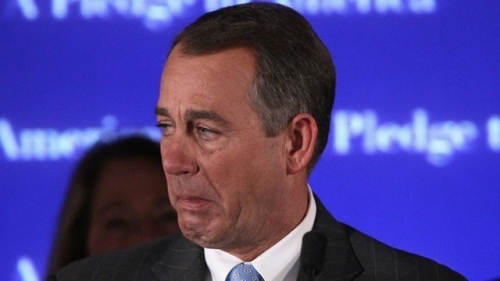 Speaker John Boehner announced that the House will vote Tuesday on the Senate’s bill to fund the Department of Homeland Security, a move that could enrage some conservatives but end the impasse over the agency’s funding.

“I am as outraged and frustrated as you at the lawless and unconstitutional actions of this president,” Boehner said to a private meeting of Republicans, in reference to President Barack Obama’s changes to the enforcement of immigration laws, according to a source in the room. “I believe this decision – considering where we are – is the right one for this team, and the right one for this count

“The good news is that the president’s executive action has been stopped, for now. This matter will continue to be litigated in the courts, where we have our best chance of winning this fight,” Boehner added.

They’re cowards. They’re scared of their own shadows. Who gives a damn if there’s a partial shutdown of DHS? It would mean NOTHING. 85% of DHS employees would be unaffected. It would be no big deal:

Even if the department shuts down and its funding runs out, it would not affect core homeland security and public safety functions that are essential to national security. As shown in the last federal shutdown, the vast majority of employees were deemed essential to protecting property and life, and some employees who were placed on furlough were recalled into work for responding to federal emergencies.

This would not in any way jeopardize national security, despite that patently obvious and stupid stunt Jeh Johnson pulled last week.

Harry Reid demanded and got not only McConnell’s surrender but also now has gotten Boehner’s capitulation.

Boehner and McConnell might as well pass another bill ceding all control to king Obama. Who would notice the difference? They need not even show up for work.

One thing is now certain: Boehner is Pelosi’s b*tch.