Obama is angling to get impeached- Updated

What to do with a President who toils against the will of the American people?

Approval ratings of Barack Obama’s handling of immigration reached a low not long ago, reaching a 65% disapproval. Americans overwhelmingly oppose Obama’s current threats of unilateral action on immigration and overwhelmingly prefer that Obama work with Congress.

The GOP is now poised to control both the House and the Senate come January, so why not wait a few months to try to work with the new Congress?

I think it’s because he has no interest in cooperation. I think he wants to be impeached and there are two primary reasons. One, he doesn’t give a rip what anyone other than Valerie Jarrett thinks and two, any impeachment effort will be immediately characterized as a lynching- a lynching of the first black President.

For his entire career Obama has been described as a “loner” and “aloof.” despite his numerous policy failures he really does think he is the smartest man in the world. The only person to whom he listens is Valerie Jarrett, the Iranian slumlord.

The problem is, the truth is always the opposite of what he says. About the only honest thing Obama has ever said was his desire to fundamentally transform this country. As far as I am concerned he cemented it later by trying to walk it back. It is no different with immigration. He once said that he couldn’t bypass Congress:

“And so what we need to do going forward is to address some of the broader problems in our immigration system. And that means changing minds and changing votes, one at a time. I know there are some folks who wish I could just bypass Congress. I can’t. But what I can do is sign a law. What you can do is champion a law. What we can do together is make comprehensive immigration reform the law of the land.”

Let’s put that through Official Barack Obama Bullshit Decoder Ring and see what we get: 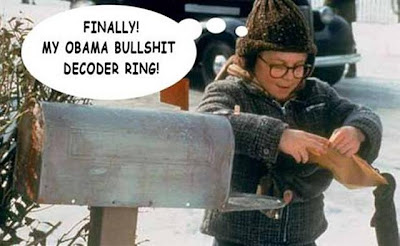 Defiant Obama: I will use my power

Following the mid term election pounding, Obama said “I hear you.” The useful idiots at WaPo put it this way:

After midterm rout, Obama says he got nation’s message

Uh, no he didn’t. Immediately after he said that:

Charles Krauthammer has said that Obama acting alone would be an “impeachable offense.” He’s right, of course, but I suspect that that’s exactly what Obama wants as he seeks a legacy. To Obama, everything is about Obama. The fist black President impeached? Now that would be quite a legacy. Impeachment of the first black President would be memorable and the effects lasting and could rescue the democrat party from its own stupidity. The good news is that left to his own devices, Obama could unilaterally lead to the extinction of the democrat party. The bad news is that, since the law and Constitution are being so greatly diminished, there might not be much of a functional country left when he’s done. The proper course is to sit back, let Obama continue to harm the Republic and then financially starve his initiatives.

Over at The Daily Beast, Doug McIntyre asks

UPDATE for one of our commenters: Let Obama tell you why he could be impeached:

Instead of falling for Obama’s extremist trap Jeff Sessions said this is the plan:

“A long-term funding bill that does not deal with President Obama’s unconstitutional overreach, adopted before a single newly elected Republican is sworn-in, would be to acquiesce to the President’s unlawful action,” Sessions said in an apparent warning to House Republicans inclined to pass a year-long appropriations bill. “This executive amnesty scheme will give work permits, photo IDs, and Social Security numbers to millions of illegal immigrants—taking jobs directly from unemployed Americans.”

Sessions suggested that he would support a short-term continuing resolution to fund government until next year, when Senate Majority Leader Harry Reid (D., Nev.) will relinquish control of the Senate.

“If Reid will not take up a long-term bill with these restrictions, then we should pass a short term CR so our new majority can include such language after it takes office,” Sessions said.

Starve the beast.
Don’t give it’s master a show trial.

Immigration is more important as a divisive political issue than it is as a problem to be resolved. The left has been using the carrot of immigration as bait for Hispanic votes since Obama began running for President. If they resolve it now, it can’t be used as a carrot in 2016… and they will need some damn fine carrots in 2016.

Obama will do nothing and blame the Republicans for his failure…. again.

Aside from the normal and expected full throttle spewage of nonsensical hate gibberish, precisely what grounds, other than another nonsensical rant from the likes of Krauthammer who “believes” which aired on the likes of a far right hack so-called news agency Fox News, for the impeachment of this sitting twice elected President?

Granted, we know you hate him and have so every since you first saw his black face. That and Krauthammer’s beliefs simply don’t fall in the guidelines of the constitution.

Little nervous are ya, Ronald? You sound a little touchy.

Question. Would he be the first Black President impeached, or would that title go to Mr. Clinton?

@Ronald J,. Ward: The Hammer was once a Democrat. When will you change? You gotta pay some taxes-freeloader?

Speaking of “nonsensical hate gibberish…” Mr. Ward those Art Voice articles that you read strewn around Coffee Houses are not the Federalist Papers and have no bearing on Impeachment and/or clarity of thought regarding separation of powers which you disdain.

@Ronald J,. Ward: The Constitution is not just a list of recommendations, it is the laws that determine how the government is supposed to function. Obama has sworn to uphold the Constitution, not figure out clever ways to side-step it.

What does it say about an administration that wants to be impeached in order to use impeachment as a political tool? Have they simply given up on producing one single positive achievement? “Impeach me so I can get sympathy and support”? Pitiful.

By the way, how do you like Gruber’s assessment of your decision making capabilities?

In solidarity evasiveness, not a single response to my quite simple question.

Do you all share the exact cowardly personalities or are you all equally dishonest in utter stupidity of the fraudulent argument you kowtow to? Or, both?

Granted, we know you hate him and have so every since you first saw his black face.

Does Obama’s black face make him above the law? What happened to his oath to protect, and defend, the U.S. Constitution that he violates with regularity?

Granted, we know you hate him and have so every since you first saw his black face.

Why don’t you try selling that bogus racism crap on the Democrats, moderates and independents who are also against Obama’s unconstitutional executive amnesty. You know, the same people who 11 days ago either rejected the Democrat message and voted for Republicans or stayed home in protest against their own party. Better yet, go sell that OFA “talking point” manure at the unemployment office, and at the hundreds of people who show up to apply for a handful of jobs, and walk away still jobless because what little job growth there is, has gone to immigrants. Perhaps you can tell that to all the Black Americans in your failed Democrat controlled metropolitan plantations who have an unemployment rate nearly double that of any other group. Yes, why don’t you tell them how racist they are for not supporting Obama’s executive amnesty scheme. Go do that and let us know what they all think about it. Maybe we will all pitch in and send some flowers to your hospital room.

The “Race Card” is meaningless. It has been undermined by race baiting partisan idiots like you.

Had you read the post instead of just making a stupid assertion you’d have learned that I am against any impeachment action. Then again, Gruber did tell us how stupid Obama supporters are.

In solidarity evasiveness, not a single response to my quite simple question.

Do you all share the exact cowardly personalities or are you all equally dishonest in utter stupidity of the fraudulent argument you kowtow to? Or, both?

Setting aside the fact that I answered the question, you aren’t too big on answering questions, simple or otherwise, yourself. Perhaps now, since Ferguson girds itself for the left wing violence sure to erupt when the revelations (which all perceptive people has already suspected) that Wilson will not be charged for a shooting in self defense, you can answer my question of why did Obama use this as an example of racial injustice in America? Why did he so so far out on a limb and risk embarrassing himself before the entire world, using this as an example? Will you ever offer an answer to this simple yet very important, in light of the eventual confirmation that the entire left was completely wrong about their accusations of racism against Wilson, question? Or, are you too cowardly?

As far as child-adult-metro man in our White House goes….there are several ‘black’ faces that would have been better suited ‘Constitutionality’ and many other ways than what we have now…ANY ‘race card’ argument at this point (Ofraud has an overall approval rate in the 30’s) just shows desperation on his hanger on supporters…like RJW.

Besides, the BLATANT LIES and non-logic of Democrats/Liberals which the Common Sense ‘Evil Right Wingers’ ‘have consistently pointed out over the last six years…have… WOW!!… imagine that-have been Right at Every Turn…now the lies continue to surface for the world to see…

Anyone trying to defend the Lying Left is just pitiful…

precisely what grounds, other than another nonsensical rant from the likes of Krauthammer who “believes” which aired on the likes of a far right hack so-called news agency Fox News, for the impeachment of this sitting twice elected President?

Let’s say hypothetically, Rick Perry is elected president in 2016. Somehow, the democrats gain control of the House and the Senate. Perry holds a news conference and says we just can’t wait for tax reform any longer. Perry announces that the IRS will no longer enforce taxes on corporations over 10%. We just have to reform corporate tax rates to bring business back to the US. But that isn’t enough, we need to kill the estate tax and that will not longer be enforced at all. And just to make sure we get things really going, the top three tax rates will no longer be enforced either, essentially making the top tax rate 28%.
How long do you think it would take for the democrat controlled congress to bring impeachment charges?

This is exactly what Obama is doing. He is refusing to enforce laws that congress has passed and other presidents have signed into law.

The Executive Branch has always had great prosecutorial discretion
What next. ? Impeachment for non prosecution of the mattress tag laws?
And let’s get
tough on federal pot possession laws
The Congress can pass any law it wants the POTUS then can prosecute those he chooses especially during wartime
Are Obama’s detractors giving aid and comfort to the enemy during wartime. ?
How long can those laws be ignored ?