What the Bergdahl deal is really all about Bowe Bergdahl has been described as a POW by the NY Times, the LA Times, and the empty headed Claire McCaskill.

They lie. Bowe Bergdahl is not a POW. He has never been listed as a POW by the Pentagon. POW stands for Prisoner of War. What war would Bergdahl be involved in? He is in a military action, but not a declared war. Bowe Bergdahl’s father, who appears to be Obama’s new foreign policy adviser, let the cat out of the bag. 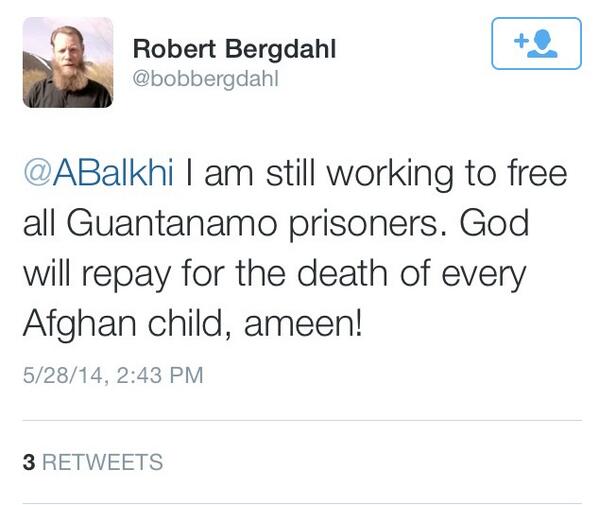 The five released weren’t any common purse snatchers. They were described as the “Dream Team” of terrorists. They were considered so dangerous that no country really wanted them. And they weren’t the first released. Last year Obama released five detainees as an “olive branch” to the Taliban. So Obama didn’t trade five detainees for a deserter. It wasn’t ten either. He traded sixteen for one deserter. Ten Taliban and six American soldiers who died trying to rescue the deserter.

But all this is a smokescreen to cover Obama’s goal- closing Gitmo no matter what the cost.

Obama famously guaranteed he’d close Gitmo within a year of taking office. It has been a thorn in his side ever since and given his pathologic narcissism it had to hurt.

Obama let Gitmo slide for a time but it appears that it was instigation from the left that provided the impetus for this current drive to close the base.

Why has Obama abandoned his Guantanamo pledge?

The Daily Beast posts this article:

Last week President Obama stood shoulder-to-shoulder with his predecessor to help celebrate the opening of the George W. Bush Presidential Library and the legacy of President Bush’s eight years in office. A central part of that legacy—much criticized by candidate Obama—was the creation of Guantánamo, an offshore prison in violation of our most basic constitutional and human rights principles. Now in his fifth year in office, Obama has only perpetuated Guantánamo as a symbol of human rights denied by abandoning his promise to close the prison. Today its continued existence is literally a matter of life and death.

The very next day:

“I’ve asked my team to review everything that’s currently being done in Guantanamo, everything that we can do administratively, and I’m gonna reengage with Congress to try to make the case that this is not something that’s in the best interest of the American people,” he said. “It’s not sustainable. I mean, the notion that we’re going to continue to keep over 100 individuals in a no-man’s land in perpetuity, even at a time when we’ve wound down the war in Iraq, we’re winding down the war in Afghanistan, and we’re having success defeating Al Qaida core.”

Obama became determined to remove the thorn and salve his ego no matter the cost. Once more he would write checks that others would have to cash. He will empty Gitmo of its terrorists and extremists to boast of fulfilling his promise. The consequences of his actions will most likely be felt well after he’s out of office and someone else is holding the bag.

It ought to. It’s the Obamacare playbook.