Wile E. Obama and his bag of tricks and anvils…

One of the great things about children’s cartoons is how the characters can do the craziest things and somehow everyone walks away unscathed. How many times has Tweety Bird ended up in Sylvester’s mouth or under a clock only to end the episode smiling as Granny scolded Sylvester? How many times did Scooby Doo and Shaggy seem to be scared into heart attacks only to be back eating in the next scene? Then of course there is Tom & Jerry who seem to spend every episode blowing each other up, or poisoning one another or pounding on one another with hammer. Invariably, regardless of the circumstances, the characters not only survive, but at the beginning of the next episode are as good as new.

Unfortunately for Americans, we’re in the middle of a cartoon, but the end of the episode doesn’t seem to be anywhere in sight and it’s unlikely anyone will escape unscathed. The star of our show however isn’t a superhero like Underdog or Popeye or Roger Ramjet, but rather the monumentally inept Wile E. Coyote. In perhaps the most brilliant piece of typecasting ever, the role of Wile E. Coyote is being played by Barack Obama. 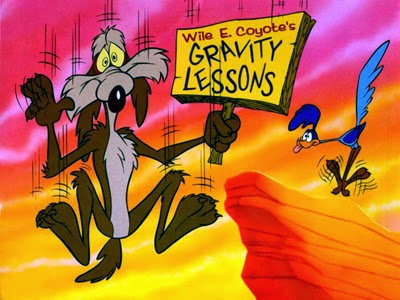 In most cartoons the dynamic has the antagonist spending the episode trying to eat or capture or somehow put an end to the protagonist. They always fail and the hero always wins. In our not so funny cartoon however we have a somewhat different dynamic. The antagonist, in this case Wile E. Obama, fails at virtually every single thing he tries. In the Road Runner cartoon, when Wile E. Coyote fails, we invariably see our hero standing at the side of the shot looking at the mess like when Coyote was stuck in a rock overhang he had just rocketed himself through. Or when Coyote was flat against a rock upon which he had painted a tunnel and into which Road Runner had just run. Or when Coyote is smoldering from a dynamite explosion he had accidentally set off while still holding it. The Road Runner typically offers his “Beep Beep” and zips down the road leaving a cloud of dust behind.

In our real life cartoon however, when Wile E. Obama sets one of his traps, there is nobody to play the role of the unscathed Road Runner who gets to speed off unencumbered by the anvil Obama has just dropped. Rather, the anvil hits the side of a mountain and touches off an avalanche that buries not only the entire town but the countryside for as far as the eye can see.

Of course the perfect example of Wile’s abilities is Obamacare. Sold on the contention that there were 45 million Americans who were unable to afford or qualify for healthcare, Wile E. Obama crafted a “fix” that would have made cartoonist Rube Goldberg proud… except that unlike a Rube Goldberg contraption, it doesn’t actually work. Instead of figuring out a solution to how to solve the problem for whatever the true number of uninsurable was, he crafted a fix that upended the health insurance system for 315 million people. And of course he lied and obfuscated in order to get the anvil to the top of the hill. Then, promising it would only land on the rich, who can afford it, he pushed his anvil off the cliff. Those below watched in horror as the anvil hit the side of the mountain and started a landslide that buried and burdened everyone as far as the eye could see. Those who thought they could keep their plans couldn’t. Those who thought their costs were going to drop by $2,500 got a rude awakening. Those who thought it would be easy to sign up found it wasn’t. And worst of all – but not surprising – only a tiny fraction of the people the bill was supposed to help ended up actually being helped. Obamacare is the equivalent of Wile E. Coyote stringing a rope between two trees in order to trip up the Road Runner but instead starting a domino effect that knocks down every tree in the country. 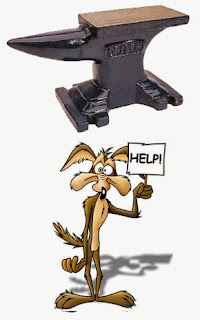 Unfortunately the Obamacare anvil is not the only weapon in Wile E. Obama’s bag of tricks. There’s also the dynamite sticks that he has used to alienate friends and embolden enemies. There’s the crayon he used to draw signs of Uncle Sam waiting in the desert with open arms, welcoming illegal immigrants. There’s the trick compass he used to turn the American space agency into a Kumbaya circle intended to build Muslim self esteem. Finally of course there is the Purple Pen he borrowed from Harold (and added a little ink from Karl Marx) to write a virtual spider web of red tape regulations with which to incapacitate not only the Road Runner, but every entrepreneur and businessman who might deign to try and start or grow a business.

The result of Wile E. Obama’s machinations is a record number of people on welfare and food stamps, the smallest Navy since World War II, an economy that can’t seem to get out of neutral and a healthcare plan that not only doesn’t work, but somehow ends up destroying millions of jobs and kicks millions of people off the insurance policies they liked in the first place. Before this episode has concluded he will have run up more debt than the accumulated total of every president before him from George Washington through his predecessor George W. Bush.

Let’s hope that when this episode is over the next can begin as if this nightmare had never happened and all the vestiges of Wile E. Obama’s failures nowhere to be seen. Maybe then we can move back to a place of normalcy where heroes, particularly those with initials RR, rule the day and the only person the bad guy injures with his bag of tricks is himself. Beep Beep!

obama did not “craft” the (un)affordable care act, insurance companies did. obama, being the latest liar puppet figure-head in charge merely gets the credit for it.

ObamaCare would only have cost $2 trillion to cover the uninsured over the ten years from 2015-2025.
But that was only if it went into law as it WAS.
Obama has patched and bandaged it over 35 times.
Today he did it again!
The Medicare Advantage cuts to seniors that was necessary to cover costs of ObamaCare have been canceled.
Yup.
He done did it again!
Every one of those thirty-some patches sends the cost of ObamaCare higher.
I wonder what it would be if the CBO ran the numbers after all these changes to the settled law are factored in?

Vince weren’t you also predicting that Obama would cause the Dow to collapse?
In case you missed it Vince Putin holds the trump cards we have 30000 troops in Afghanistan and what’s left of a million tons of war material and the only way out is through Russia. Next time we decide to have a land war in Asia somebody ought to ask about its ending.
Nan please cite your budgetary figure because the CBO estimate is about 150 billion over the next decade. http://www.cbo.gov/publication/44176
Great vlaims require great proofs

@john: No, I don’t think he’s going to run the markets into the ground. Just the country. The markets will do just fine… Big Business + Government… Why Wall Street records don’t mean happy days are here again…

@john: Or, maybe Obama should get our troops and material back home before he makes a career of being an international coward.

When the anvil comes down and people lose their current Health Insurance Policy – the health care they already had…. then are forced to sign up to the ACA known as Obamacare…THEN when they ‘access’ the Government site and can only go so far, and the Government system freezes up…a glitch… and remains a ‘glitch’ until… ???

The next Anvil… – MY question is this…what do the bright bulbs in Washington DC – Obama – Reid – Pelosi – Our democratic Congress who whole heartedly voted for this ‘Law’ to pass – Our Senate – Justice Roberts…SUGGEST these people DO if God Forbid something happens to them and they need medical assistance?

Are the NOT in Health Care Limbo?…they do not have Health Insurance to cover any expense incurred.

Where is the guidance from our “experts’ in Washington now??? What bright bulb in Washington is directing people who just might run into this situtaion?? What do people do??

I have searched for answers…and found…none.

However, I did find this ‘rich piece’ of b/s:

“Obama, in an NBC interview Thursday, said “I am sorry” to people who are losing coverage and had relied on his assurances that if they liked their plan, they could keep it….”
“The president says he’ll do everything he can to help people coping with health insurance cancellations, but legally and practically his options appear limited. That means the latest political problem engulfing Obama’s health care overhaul is unlikely to be resolved quickly, cleanly or completely.”

Unless I totally missed it, I have not been able to find any recourse as directed by our politicians?

@john: Nan please cite your budgetary figure because the CBO estimate is about 150 billion over the next decade.

The ”next decade?”
Do you mean this decade when ObamaCare is still being subsidized by all the early taxes and fees that are propping it up from 2010 until it actually starts kicking in next year?
Because, from 2010 to 2020 it stays a cheap cost for the government thanks to years of taxes and fees that were building up before the kick-in date.
I’m talking about AFTER that money is gone.
2015-2025.
The bill’s gross costs will then be huge; ten years of full implementation, from, say, 2015–2025, will cost more than $2 trillion, since the bill ticks in at $250+ billion per year after 2021.

To quote the CBO:
The ACA’s
provisions related to insurance coverage are now projected to have a net cost of
$1,252 billion over the 2012
–
2022 period (see Table 2
, following the text
); that
amount represents a gross cost t
o the federal government of $1,762 billion, offset
in part by $510
billion in receipts and other budgetary effects (primarily revenues
from penalties and other sources). The addition of 2022 to the
projection
period
has the effect of increasing the costs o
f the coverage provisions of the ACA
relative to those projected in March 2011 for the 2012
–
2021 period.

Thing is, after our first decade of tax collecting/penalty and fee collecting in order to pay for only four years worth of coverage, we hit our next decade when there is no extra tax/penalty/fee collections for each years’ worth of costs.
People pointed this out years ago!
Obviously some people had blinders on about the truth of this because……black.
But bottom line ObamaCare costs $250+ billion per year after 2021.
That’s like $2.5 trillion a decade.