The masks are off. democrats are proving just how deeply fulminant racism runs through them. They maintain a charade of cordiality but burn inside with hatred of Hispanics.

democrats have decided to target Ted Cruz with these racism. The attacks are led by a trio of privileged whites. David Denby of the New Yorker is a white WASP who grew up in New York and , lives in Manhattan and donated to John Kerry in 2004. He is said to have been influenced by Pauline Kael (irony alert). This vicious, privileged white man had this to say about the Hispanic Cruz:

When Ted Cruz lies, he appears to be praying. His lips narrow, almost disappearing into his face, and his eyebrows shift abruptly, rising like a drawbridge on his forehead into matching acute angles. He attains an appearance of supplication, an earnest desire that men and women need to listen, as God surely listens. Cruz has large ears; a straight nose with a fleshy tip, which shines in camera lights when he talks to reporters; straight black hair slicked back from his forehead like flattened licorice; thin lips; a long jaw with another knob of flesh at the base, also shiny in the lights. If, as Orwell said, everyone has the face he deserves at fifty, Cruz, who is only forty-two, has got a serious head start. For months, I sensed vaguely that he reminded me of someone but I couldn’t place who it was. Revelation has arrived: Ted Cruz resembles the Bill Murray of a quarter-century ago, when he played fishy, mock-sincere fakers. No one looked more untrustworthy than Bill Murray. The difference between the two men is that the actor was a satirist.

Cruz speaks crisply. Still, like McCarthy, he evokes a menace that is destroying the nation: Obamacare, which is killing jobs, obliterating businesses, demoralizing everyone. Obamacare is his Communism, a conspiracy that is the main impediment to economic growth. It is a malaise that is particularly hurting “single moms, Hispanics, African-Americans”—a brazen touch on Cruz’s part, since it is exactly those three groups whose interests Republican policies tend to ignore. It takes a certain ingenuity to suggest that an attempt to insure the powerless is rendering them powerless. One of Cruz’s tricks is to turn his enemies’ words back on them so that they stand accused in their own language. Meanwhile, he remains, at least rhetorically, invulnerable behind a mask of sincerity.

Thing is, McCarthy was right.

Cruz took a lot of heat for joking that Nigerian email scammers were running the Obamacare website. That’s obviously false. The Nigerian scammers would have done a much better job.

Then there’s the racist Sally Kohn. 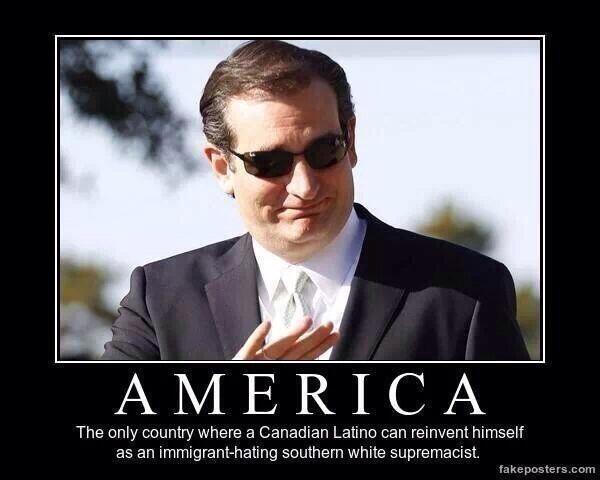 Sally is a privileged white Jewish woman who lives in the affluent Park Slope area of Brooklyn.

Kohn suggested that the deaths at Benghazi, including a US Ambassador, were “barely a molehill.” She also blamed Ted Cruz for the long security lines at airports.

Kohn, as do all hateful liberals, misrepresents and tortures the positions of those who disagree with her. Cruz does not have a truck with anyone who immigrates legally, which mirrors conservative beliefs. Then we come to Harry Reid, the uber-privileged pasty, wimpy, wealthy white racist Mormon from Nevada. Until 1978 blacks were second class citizens in the Mormon Church and black men were forbidden from participating in the priesthood.

Reid once said that Barack Obama was electable because he was a “‘light-skinned’ African American ‘with no Negro dialect, unless he wanted to have one.”

Reid recently piled it on the Hispanic Cruz:

Reid, a Nevada Democrat, admitted that Cruz raised a lot of money and earned a lot of support from Republican conservatives during the government shutdown battle, but suggested that the freshman senator from Texas would cripple the Republican Party.

“If I didn’t care so much about the country, I would hope he got the Republican nomination for president, because that would mean the end of the Republican Party,” Reid said. “He stands for everything America doesn’t.”

So what is it that makes Cruz so un-American? Let’s have a look at some examples:

Cruz: I Hope the Fifth Circuit Will Uphold Texas’ Reasonable Law Protecting the Health of Texas Women and Unborn Children

President Obama should listen to people who have lost their plans

Reid Tables Bill to Fund Government, Refuses to Come to Table with Republicans

Ted Cruz, unlike these liberal racists, does not make personal attacks. Let’s listen to someone who really knows Cruz and says Cruz is nothing like his caricature:

Everyone wants to know: Who does this guy think he is?

Unlike most of his critics, I’ve known Cruz for more than 10 years. And, the real thing doesn’t resemble the caricature.

Here are the charges leveled against him: Cruz doesn’t ask “Mother, may I?” before he speaks. Cruz doesn’t respect his elders in the Senate. (This includes John McCain, who ironically, in 2000, built an entire presidential campaign on his reputation for being a “maverick” in the Senate.) Cruz insults his colleagues for being “squishes” on tough issues. (Like Chuck Hagel who, in January 2007, scolded his Senate colleagues for waffling on the surge in Iraq, telling them: “If you want a safe job, go sell shoes.”) Cruz has an enormous ego. (No, not in the Senate!) And, lastly, Cruz is in an awful hurry to make his mark. (Like Barack Obama, who formed an exploratory committee for a presidential run in January 2007, just two years after being sworn in to his first Senate term).

Not all the reviews are negative. Consider what one well-known Beltway exile had to say about Cruz.

“I think he is the most talented and fearless Republican politician I’ve seen in the last 30 years,” Democratic strategist James Carville said during a panel discussion on ABC’s “This Week.” The Ragin’ Cajun is right. Ted Cruz doesn’t back up. He keeps coming. He is not shy, deferential or susceptible to peer pressure. And that terrifies the D.C. establishment — in both parties. Just as it frustrates the media. Neither one knows what to do with him.

Those of us who know Cruz can offer some advice: Stay out of his way.

And the people who know him love him.

There is no racist like a white liberal racist.