This be an open thread for ye band o’ scurvy scallywags t’ link t’ tales that interest you; and discuss whatever t’ hell ye want. T’ only request be that ye form yer sentences in piratese; or at t’ least, end some sentences in at least one hearty “aaar!”

How do you know if you are a Pirate? You don’t, you just AAARRRRRGH! 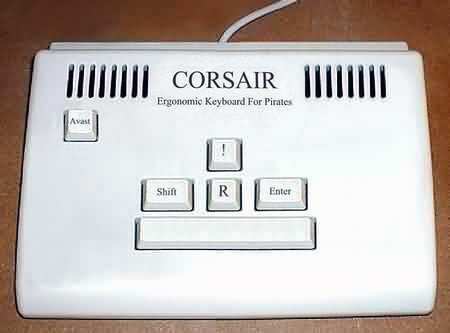 What’s a pirate’s favorite letter of the alphabet?

Where be me rum, scupper me hide? Rum! It be food and drink for the likes o’ me!

Arrrh! light is the love of a pirate,
That’s what the ladies sayee –
Lightly he goes a wooing,
Lightly he sails awayee.
In love and war we always are
As fair as fair can be,
And a pirate boy is the ladies’ joy
In Jamaica by the Sea.

WSJ talkin‘ about the real pirate in the WH:

Th’ evidence suggests that Mr. Obama wants a showdown wi’ Congress that ends wi’ a government shutdown or a dance wi’ default. He can then mount an offensive against Republicans that will rally his base, which soured on his Syrian plans an’ vetoed Larry Summers fer th’ Federal Reserve. Wi’ his domestic agenda dead on Capitol Hill, Mr. Obama may also figure that stigmatizin’ Republicans o’er a shutdown-default crisis be th’ only way that Democrats can retake th’ House in 2014.

Th’ question be how well all o’ this will play wi’ a war-weary public. Mr. Obama be nay longer th’ fresh young idealist President, an’ Americans be beginnin’ t’ figure ou’ his methods. Like Assad an’ Mr. Putin, they may conclude that he`s nay longer a President whose words they can take seriously.
Ya landlubber whut deserves the black spot!

Augustus
err the seven seas yiiii morrrrrow will see,
bring treasure of gold from down beyong,
and be care of the whales who sing aaaaammmm so fine,

Wordsmith
err he to be smother away on the 7th ripples ti only wan to sink younder
far down under the sea, fer ti to gargle na more, arrrrg

Shiver me timbers, the FED’s goin’ to continue buyin’ up state and mortgage bonds to keep down long-term interest rates. But there be great dangers in the longer term keepin’ them rates low. Arrrh! A market that lives by QE, will die by QE! The monetary policy of the FED has bin creatin’ them soap bubbles in the stock markets and housing markets, and also created a bubble in them government bonds. Good luck gettin’ out of that one easily! Them rates should ‘ave never come down so low. The pain should ‘ave bin dealt with in 2008, or ever afore that.

Mad Capn Bob
ye be takin me cup o grog at yer own peril
to die by inches and to hang by yardarn
shiver me timber
I just came back from GOOGLE SEARCH OF pirates speech,
very many of them.
bye yer all

Augustus
AAAAGH, THOSE RED STAMBERS, come for the leader, now aaaarg who make money from it,
it has to be a good grog hog because they are selling it to some who don’t want it,
there is card also, hergg that business is very profitable, we don’t know who getting richer from the taxpayer pockets, because they pretend it’s not money, and it’s being spend by millions,
YE BE TAKING ME GROG AT YER OWN PERIL TO DIE BY INCHES AND HANG BY THE YARDARM,

Wordsmith
don’t arrrgh with me, do you have someti that float?
fer we taking water, we all going yonder er
if we stay here aaaargh sheet it’s cold and wet

Arrrr! I be waitin’ fer th’ virus keelhallin’ ware on me computer to do somethin’. It is Avast! ye swabs.

Why arrrrrrrgh ye doin’ this?

anticsrocks
er, aaaaargh you askin fer a grog?
what difference fer it make?
you will help us recue ti boat?
sinking with treasures, save the treasures,
er tis was waiting fer you, MATEY,
T COME FROM AVAST,
ARRRRGH

Arrrgh! I had a tooth pulled and ground cadaver bone put in the socket as the first step toward an implant on Talk Like a Pirate Day. First thing I said when the novocaine wore off was:

Coincidently, I used a Bill Maher quote this week arguing with some unhinged “defund and burn” supporter.

Of course, the Democrats are disappointing. That’s what makes them Democrats. If they were any more frustrating they’d be your relatives. But in this country, they are all that stands between you and darkest night. You know why their symbol is the letter D? Because it’s a grade that means good enough but just barely. You know why the Republican symbol is R? Because it’s the noise a pirate makes when he robs you and feeds you to a shark.

@ilovebeeswarzone: Your “R” description doesn’t follow the theme of this thread, or reality.

Ronald J. Ward
yes but I FIXED IT,
CHECK AGAIN