Traitor, Not a Whistleblower: John Kiriakou 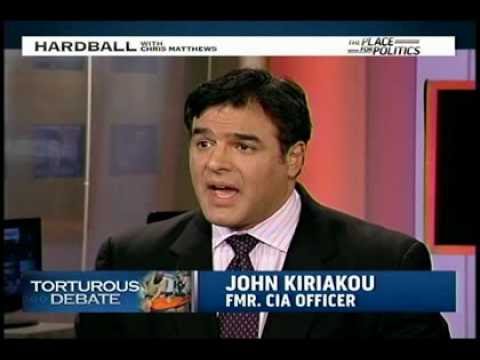 The judge rejected his claims that he acted in the interests of the nation as a whistleblower:

A plea deal required the judge to impose a sentence of 2 1/2 years. U.S. District Judge Leonie Brinkema said she would have given John Kiriakou much more time if she could.

Kiriakou’s supporters describe him as a whistleblower who exposed aspects of the CIA’s use of torture against detained terrorists. Prosecutors said he was merely seeking to increase his fame by trading on his insider knowledge.

Kiriakou’s 2007 interviews about the interrogations of al-Qaida terrorist Abu Zubaydah were among the first by a CIA insider confirming reports that several detainees had been waterboarded.

How exactly is he a whistleblower when the issue of waterboarding had already been leaked by the time he “spoke out”?

“The next day, he told his interrogator that Allah had visited him in his cell during the night and told him to cooperate,” said Kiriakou in an interview to be broadcast tonight on ABC News’ “World News With Charles Gibson” and “Nightline.”

“From that day on, he answered every question,” Kiriakou said. “The threat information he provided disrupted a number of attacks, maybe dozens of attacks.”

Now retired, Kiriakou, who declined to use the enhanced interrogation techniques, says he has come to believe that water boarding is torture but that perhaps the circumstances warranted it.

“Like a lot of Americans, I’m involved in this internal, intellectual battle with myself weighing the idea that waterboarding may be torture versus the quality of information that we often get after using the waterboarding technique,” Kiriakou told ABC News. “And I struggle with it.”

And then of course, there was his self-serving 2010 book, Reluctant Spy: My Secret Life in the CIA’s War on Terror. After 190 pages into a 192 page book, we get this beautiful admission:

What I told Brian Ross in late 2007 was wrong on a couple of counts. I suggested that Abu Zubaydah had lasted only thirty or thirty-five seconds during his waterboarding before he begged his interrogators to stop; after that, I said he opened up and gave the agency actionable intelligence. I wasn’t there when the interrogation took place; instead, I relied on what I’d heard and read inside the agency at the time. Now, we know that Abu Zubaydah was waterboarded eighty-three times in a single month, raising questions about how much useful information he actually supplied. In retrospect, it was a valuable lesson in how the CIA uses the arts of deception even among its own.

The national debate on waterboarding and other forms of torture got a second wind early in Obama’s presidency, and I’m proud to have played a small part in it.

Get that? He never actually witnessed the act of waterboarding by CIA interrogators. He acted on hearsay. And now he wants to play the role of martyred, conscientious whistleblower.

Kiriakou is not a patriot but a traitor who has endangered lives of patriots for his own glory-seeking:

In court papers, prosecutors said the investigation of Kiriakou began in 2009 when authorities became alarmed after discovering that detainees at Guantanamo Bay possessed photographs of CIA and FBI personnel who had interrogated them. The investigation eventually led back to Kiriakou, according to a government affidavit.

Prosecutors said Kiriakou leaked the name of a covert operative to a journalist, who disclosed it to an investigator working for the lawyer of a Guantanamo detainee.

Kiriakou was initially charged under the World War I-era Espionage Act, but those charges were dropped as part of a plea bargain.

Judge Brinkema said, “This is not a case of a whistle-blower.” She went on to describe how the identity of the C.I.A. officer working under cover had been revealed by Mr. Kiriakou’s disclosures, and the damage it had caused the agency, based on a sealed statement from the undercover agent.

Moments before issuing the sentence, Judge Brinkema asked Mr. Kiriakou if he had anything to say. When he declined, the judge said, “Perhaps you have already spoken too much.”

After the hearing, Mr. Kiriakou, who did not begin his sentence on Friday and was allowed to leave the courthouse, addressed members of the news media for a few minutes.

“I come out of the court positive, confident and optimistic,” he said, thanking supporters.

Sentenced and condemned in a court of law, Kiriakou seeks to win in the court of public opinion, buoyed by the support of the misguided anti-torture activists. And of course he has his supporters in high places:

This week, Bruce O. Riedel, who was appointed by President Obama to lead a review of United States policies in Afghanistan, sent a letter to the president asking him to commute Mr. Kiriakou’s sentence. The letter was signed by many others, including former C.I.A. officers.

In subsequent e-mail exchanges with a freelance writer, Mr. Kiriakou disclosed the name of one of his former colleagues, who was still under cover and had been a part of the detention and interrogation program.

The freelancer later passed the name of the undercover agent to lawyers representing several Qaeda suspects being held at Guantánamo Bay, Cuba.

The lawyers later included the name in a sealed legal filing, angering government officials and kick-starting the federal investigation that ultimately ensnared Mr. Kiriakou. The name was not disclosed publicly at the time, but it appeared on an obscure Web site last October. In January 2012, federal prosecutors indicted Mr. Kiriakou, accusing him of disclosing the identity of an agency analyst who had worked on the 2002 raid that led to Abu Zubaydah’s capture and interrogation.

The prosecutors said Mr. Kiriakou had been a source for a New York Times article in 2008 written by Scott Shane that said a C.I.A. employee named Deuce Martinez had played a role in the interrogation. When Mr. Kiriakou pleaded guilty last October, the charges stemming from that disclosure were dropped along with several others.

Prosecutors raised questions this week about Mr. Kiriakou’s contrition. In a filing, prosecutors cited a lengthy article by Mr. Shane published this month in The Times in which he quoted Mr. Kiriakou as saying that if he had known that the C.I.A. officer was still under cover, he would not have disclosed his identity.

The prosecutors said that Mr. Kiriakou’s intimation that the disclosure was an “accident or mistake” contradicted his plea that he had willfully disclosed the information.

This is the man lionized on the left as some sort of anti-torture hero. And this is just rich:

The most surreal aspect of the sentencing was the huge emphasis placed on how Kiriakou’s action endangered the supposedly-undercover officer and damaged the CIA’s ability to collect intelligence. But the public never heard a single word about how exactly the officer’s life was “endangered” (only that some family members had not known he worked for the CIA) because that assessment was in a secret statement that even the defendant was not allowed to see–because the government pulled Kiriakou’s security clearance the day before–specifically so he could not see what “damage” he was about to go to jail for causing.

If the “supposedly-undercover officer” had the name “Valerie Plame”, then the left would be in an uproar.

John Kiriakou: Self-serving scumbag. Acting out of self-interest, not concern for national-interests.

Here he is on The Today Show, today:

Forgot to add mention, as a side note, the following related interest:

AEI’s Marc Thiessen (author of “Courting Disaster: How the CIA Kept America Safe and How Barack Obama Is Inviting the Next Attack”) will host a panel discussion with three CIA veterans who were involved in the hunt for bin Laden.

Login
wpDiscuz
26
0
Would love your thoughts, please comment.x
()
x
| Reply
‹ Back to Categories