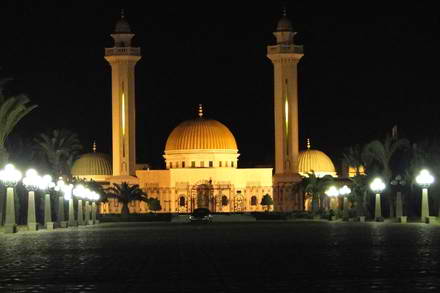 The Bourguiba Mausoleum of Tunisia

Tunisia’s former President Zine El Abidine Ben Ali found a safe haven in Saudi Arabia on Friday, he was prevented from landing in Paris by President Sarkozy, while Tunisia has devolved into near chaos. Ben Ali, the 74 year old president, took power after a bloodless coup in ’87 as a Social Democrat. In an all too typical scenario of Marxist leaders, he established an authoritarian police state: while the country was mired in poverty, he and the Elites established a system of government based on nepotism and corruption, while living in opulent luxury.

Last month, a 26 year old college graduate, who could not find work and was selling fruits and vegetables without a permit had his produce impounded, in despair over his inability to support his family, he doused himself with gasoline and struck a match as a measure of protest. The social networks of twitter and Facebook were used to generate public anger and disgust over the events and causes of the self-immolation and the man’s feelings of hopelessness, thus they served as an impetus for revolution.

There were Wikileaks cables describing the corruption and graft of the Ben Ali Presidency and speculation that they contributed to the unrest that deposed the former government: the Obama Administration was quick to deny that their allegations of corruption concerning the Marxist government exposed in the Wikileaks cables precipitated the revolution in Tunisia, the administration was adamant in maintaining that the people of Tunisia were well aware of the corruption within the government.

The Obama regime has been quick to absolve itself of any blame for all unpleasant incidents; consequently, their claims of being innocent of any unpleasantries have become rhetorical and thus they have lost meaning in this age of state sponsored propaganda. That is a sad result of automatic absolution of guilt by leadership: the public no longer listens and routinely regards all such proclamations as suspect, even if they are truthful in nature. There remains the nagging question of why would it matter to the Obama Administration that the Wikileaks cables had a part in starting the revolution, why the vehement denial? To whom do they proclaim their innocence?

In Tunis, Tunisia, authorities are struggling to end the violence. Fire fights have broken out around the capital and around the former president’s palace on the shore of the Mediterranean and the headquarters of the primary opposition party. Looting, arson, and violence has been the result of a vacuum of leadership and control since Ben Ali left the country on Friday as factions struggle to gain control. The violence seems to be between Tunisians who are emboldened by the abdication of Ben Ali and by loyalists who aren’t anxious to give up their prestige and perks they enjoyed under the totalitarian police state of Ben Ali.

Neighboring countries are now feeling a loss of confidence in the markets as people sell their commercial paper, while wondering if the political turmoil of Tunisia will spread into other dictatorships in the Middle East.

The Tunisian protests may embolden demonstrators who have recently taken to the streets in other North African and Middle Eastern countries, including Egypt, Morocco and Jordan, all of which have experienced demonstrations about economic conditions, said Marina Ottaway, director of the Middle East program at the Carnegie Endowment for International Peace in Washington.

“People are selling because they think the same might happen here” given unemployment and inflationary pressure, Alia Khalil, senior equity trader at Cairo-based Pharos Holding for Financial Investments, said by telephone.

Egypt’s Unemployment Is Similar To America’s

Former European Commission President Romano Prodi said Egypt may be vulnerable to an uprising similar to Tunisia as “the fragility of the political situation makes it extremely vulnerable to youth unemployment and the increase in the price of bread,” according to an editorial in il Messaggero.

Unemployment in Egypt stands at 8.9 percent according to the Cairo-based Central Agency for Mobilization and Public Statistics. The government says it needs to maintain a growth rate of about 7 percent to create enough jobs for the 750,000 people who enter the workforce every year. Egypt’s central bank said last week core inflation, the benchmark it uses to make interest rate decisions, increased to 9.65 percent in December from 8.93 in the previous month.

No other Arab leaders have been forced out of power by public pressure since 1985, when public unrest led to a coup that unseated President Gaafar al-Nimeri.

Ben Ali’s 23 year reign has been noted for corruption and graft that has recently been characterized by even more of his wife’s and her family’sgreed:

The French government suspects that former Tunisian president Zine al-Abidine Ben Ali and his family may have fled the country with 1.5 tons of gold, French daily Le Monde reported Monday.

According to the French secret service, Leila Trabelsi, the wife of the ex-president, went to the Central Bank of Tunisia to fetch the gold bars, the paper reported.

The governor of the bank is reported to have refused to give them to her, so Trabelsi rang her husband who first also refused to help, before giving in, according to Le Monde.

“It seems that the wife of Ben Ali left with some gold, 1.5 tons or 45 million euros worth,” a French politician told the paper.

In one of the iconic ironies of Marxist and totalitarian forms of Social Democratic governments, rulers must gauge how much corruption the public will endure for the Elites to live in opulent luxury at the expense of the workers in their Utopian dream state of eternal poverty. Now many of these Arab leaders are wondering if perhaps they have taken too much from the people in order to live as Elites.

Men who are willing to self-immolate are stepping forward to sacrifice themselves in protest of governments that offer few freedoms and little opportunity:

A Mauritanian man set himself on fire, the third self-immolation attempt apparently influenced by a man in Tunisia.

Local journalists say 43-year-old Yacoub Ould Dahoud said he was unhappy with the government. Witnesses say he drove to a government building in the capital and torched himself in his car.

The attempt follows similar incidents, including one in Algeria. Also Monday, an Egyptian man set himself on fire in an apparent protest.

The utter desperation of men who are willing to set themselves on fire will possibly be enough to set more than one government on fire in the Middle East. There is no doubt that many Arabs are dissatisfied with living in poverty, in order to enable their elites to live in splendor, there is a real possibility that more totalitarian governments may fall in the Middle East; unfortunately, the Islamic fundamentalists will be waiting in the shadows to offer their own form of Marxist dystopia to the unsuspecting innocent who has only known despotism.

Normally, revolution with the goal of a free society and government is to celebrated, but the Islamo Fascist is well funded and organized throughout the Middle East and with our own president increasing our dependence on foreign oil with the closing of vast oil fields, oil fields that could allow us to be independent of foreign oil, the possibility of Islamo Fascists gaining control of oil resources and causing havoc in our supplies and the world market in general is an ominous possibility.

The idea of forcing America to be a Green Society before the technology is available is a pipe dream of an idealist who is ignoring the fact that we are an oil based society and that relying on energy technologies that don’t yet exist, at the expense of cutting off our own oil supplies is a template for the destruction of this country. Technologies develop at their own rate, not because a bureaucrat determines that we need them at a specific time. Alternative energy will develop, it is inevitable, a natural result of free market enterprise.

Ben Ali was successful in keeping the Islamo Fascists under control with his totalitarian police state and that may be his only real accomplishment for 23 years in office. Now we and the rest of the world are wondering whether the emerging Democratic Revolution, a result of 23 years as a police state, will produce new fundamentalist dictators. The previous revolutions to establish democratic governments produced Islamo Fascists in Tehran and Algiers, Hezbollah in Lebanon, Hamas in Gaza, and Islamo Fascist-wannabes running Turkey.

And while the Islamic world is watching these events unfold with a degree of trepidation, we must have faith that our president has read of solutions on the teleprompter between golf games, so that we are ready to meet these new and important challenges that are like a fuse on the powder keg that is the Middle East.