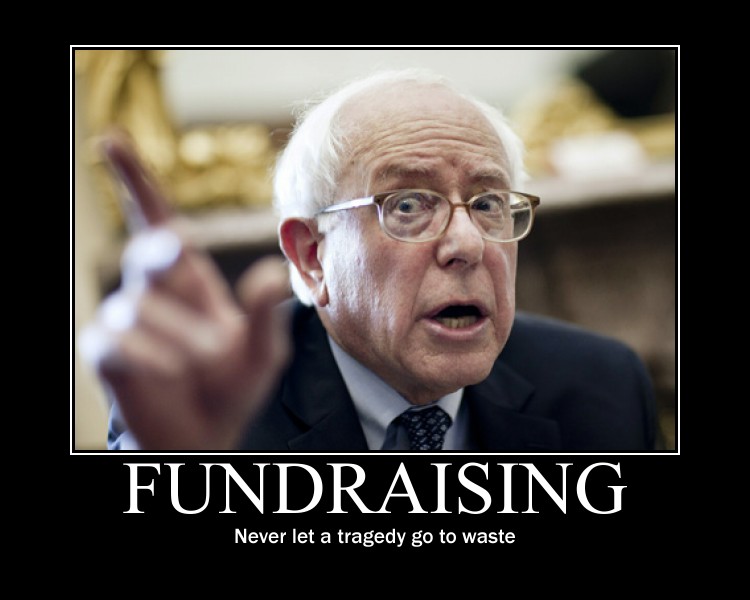 Following a tragedy it can be expected that the left will take advantage of it to further a political agenda and that is exactly what happened.

In the wake of the event in Tucson member of both parties in Congress put a stop to their political activities out of respect for Congresswoman Gabrielle Giffords.

Lawmakers had scheduled various fundraisers and meet-and-greet events with lobbyists and other donors this week, but those were canceled as Democrats and Republicans offered a unified expression of sympathy for Giffords and the other victims.

Lawmakers have even canceled the fundraising phone calls that take up much of their time when they’re not voting or sitting in committee meetings.

“We canceled everything,” said Bruce Kieloch, a Democratic fundraising consultant who works with about a dozen members of Congress. “We cancelled our fundraising calls this week. We canceled all the prep time.”

But not Bernie Sanders.

Bernie took full advantage of the Tucson tragedy to fill his pockets, sending out a fund raising email.

We learn a lot from Bernie’s email.

We learn who was responsible for the shooting in Tucson:

Sen. Bernie Sanders, I-VT, today sent out a fundraising email to supporters in which he includes his analysis of the Arizona shootings that ties the tragedy to “right-wing reactionaries.”

Send me money or more people will die.

There is no question but that the Republican Party, big money corporate interests and right-wing organizations will vigorously oppose me.

We learn that many in this country have only one channel on their TV- Fox News:

For many of these Americans, the only news that they receive comes from these extreme right-wing commentators.

We learn that Republicans will subvert the democratic process:

They not only won decisive victories in the last election but, as a result of the disastrous Citizens United Supreme Court decision, they correctly believe that they will have a huge financial advantage in future elections because billionaires and corporate interests can now contribute as much as they like into the political process without disclosure.

We learn that Republicans will destroy the country:

We learn that Republicans will destroy Medicare and Medicaid:

This means, over a period of time, completely eliminating Medicare, Medicaid and other public health programs.

We learn that Republicans plan to bankrupt everyone

Their long-term goal is to create a situation in which the retirement accounts for workers will be administered by Wall Street – at great profit for financial investment firms. And when the stock market crashes and you lose your retirement savings, you’re on your own. Good luck.

We learn that unemployment compensation must go on forever

They do not want to simply deny the extension of unemployment benefits to workers who lost their jobs in this recession – the worst economic downturn since the Great Depression seven decades ago. Some of them want to eliminate the concept of unemployment compensation. Their position is: Lose your job? You’re on your own. Good luck.

And we get a huge dose of irony

Another Democratic elected official in Arizona, recently defeated Congressman Harry Mitchell, suspended town meetings in his district because of the threatening phone calls that he received (Mitchell was also in the cross-hairs on the Palin map).

It was Mitchell’s campaign which literally put JD Hayworth in the cross hairs of a gun sight.

And we learn that Democrats in Arizona are too intimidated to vote:

In light of all of this violence – both actual and threatened – is Arizona a state in which people who are not Republicans are able to participate freely and fully in the democratic process? Have right-wing reactionaries, through threats and acts of violence, intimidated people with different points of view from expressing their political positions?

I wonder how Reid beat Angle?

A spokesman for Sen. Sanders has defended the fundraising email by saying that Sanders regularly sends out such letters to supporters giving his views on key issues and “it would have been absurd not to comment on what happened” in Arizona.

Did I or did not read of Democrats’ pleading for more civility?

Sometimes it’s hard to remember we’re all on the same team. That’s why http://mittromneycentral.com/2011/01/12/congressman-pence-introduces-bill-to-defund-planned-parenthood-of-taxpayer-dollars/ was so refreshing and timely. Before the race for 2012 officially starts, we should get as many people to read that wonderful piece as we can. Then, in 2012 we can bring America back!

Aw yes, sap from Vermont, it isn’t just for pancakes.

Vermont is in the exporting business. Maple syrup, marxists like Sanders, Leahy, and Dean and socialists who move to money making states for jobs and tax breaks. What other economies can they ruin?

No different than the prog environmentalists asking old ladies and children for money to save the planet.

DrJohn, that was an excellent Fisking* of B. Sanders’ email.

A very telling page about B. Sanders is his ”On the Issues” page….scan down to where he sits on the political philosophy grid…..uber-Leftist!
Yet, technically, he and crazy Jared have more in common than all the Tea Partiers put together!
They are both registered Independents!

*The term fisking is blogosphere slang describing a point-by-point criticism that highlights perceived errors, or disputes the analysis in a statement, article, or essay.

Congresswoman ‘s Gabrielle Giffords’ (D-Ariz.) shooting in Tucson, Ariz., last weekend has brought up several questions about the partisan nature of our current political climate. But today Sen. John Kerry (D-Mass.) said in a speech at the left-leaning policy think tank Center for American Progress that working in a bipartisan manner on infrastructure and clean energy could help overcome the “divisive political rhetoric” in the wake of the Tucson tragedy.
~~~~~
Now is the moment for America to reach for the brass energy ring – to go for the moon here on earth by building our new energy future– and, in doing so, create millions of steady, higher paying jobs at every level of the economy. Make no mistake – jobs that produce energy in America are jobs that stay in America. The amount of work to be done here is just stunning. It is the work of many lifetimes. And it must begin now,” he said.

“There’s a bipartisan consensus just waiting to lift our country and our future if senators are willing to sit down and forge it and make it real … in this time of crisis and mourning, in this time of challenge and opportunity, we need to commit to reaching across the aisle, as colleagues did before us, to unite to do the exceptional things that will keep America exceptional for generations to come,” he said.

Senator Ketchup who ditched his hard earned medals is going to unite America with his green crap. Go dock another boat in Rhode Island.

Think of the ramifications to the green renewable progs if at some time in the future we find that oil is a renewable energy source that is being replicated by the forces within the bowels of the earth. Now wouldn’t that be something?

Is green energy keeping you warm in the 49 states that have snow? The only green is gangrene from frostbite.

Rasmussen: Just 28% of Adults say the shooting in Arizona was the result of political anger in the country.
http://www.rasmussenreports.com/public_content/politics/general_politics/january_2011/most_voters_view_arizona_shootings_as_random_act_of_violence_not_politics

Huh – 28%. After all the propaganda and saturation of the airwaves. Just 28%. That’s about the same proportion of the population that think the moon landings were faked or that Elvis is still alive. That’s not just fail. That’s epic fail.

Gee, Bernie. Cold blooded exploitation of a mass murder isn’t panning out, is it? You and the rest of the statists zigged when you should have zagged. Shouldn’t have just worked straight off the talking points memo. Should have taken a minute to think for yourselves. Should have done the decent thing. A little girl and five other people died. Others maimed. But you all took the path of least resistance, and now it sucks to be you. Disgraced by your own hand, with nothing to show for it.

The faithful, your people, the people waiting for Elvis (so to speak), don’t need to be convinced. They already believe. It’s the other three quarters of the country you have to convince. But you’re not talking to us – are you?

These people like Sanders style themselves as so much smarter and more moral than people who disagree with them about making the government bigger and bigger. Yet, they got it so completely wrong and they behaved with such a lack of morality.

Huh. It’s almost as if they’re a bunch of delusional unprincipled liars. But that’s crazy talk.

like I said, those guys want to arm themself, look at their behavior,
is that a sane person,

@Buffalobob: that may well be happening –the Electric Universe theory allows for that and there are already some who advocate that possibility–still too soon to tell if the idea has merit –but who knows ??

it seems to me they always asking for money to spend, is nt it a bunch of beggars,
are those elected by the people? geez, what kind of people elect a guy like BERNIE,

Buffalobob, hi, that is very interesting, do we know where that oil come from?
is it from the remnants of all creatures past ? that is what seems to be, in my view,
and if it is, your saying is then very right

Bernie Sanders is nothing but a maggot, feasting on the bodies of the dead. Enough to turn your stomach . There still needs to be more House and Senate cleaning.

Tells you how far gone the people who voted for Bernie are.

It doesn’t get much more wretched or repulsive than this.

The only thing more disgusting than Bernie, is the dim-witted twits that repeatedly elect this buffoon to public office. Come on Vermonters, GROW A BRAIN!

I wonder how Reid beat Angle?
By: DrJohn

Not sure what my nym was here as I haven’t been here since 2008 election so I’m using my LGF nym.