Boehner & The New House Republicans Showing Some Backbone? Doesn’t Look Like It 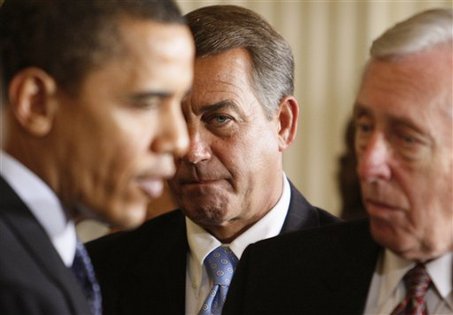 Harry Reid, in all his arrogance, wrote a letter to House leaders a few days ago pleading for them to abandon any talk of repealing ObamaCare…and the new speaker did an excellent job in answering it. First the appeal:

“The incoming House Republican majority that you lead has made the repeal of the federal health care law one of its chief goals. We urge you to consider the unintended consequences that the law’s repeal would have on a number of popular consumer protections that help middle class Americans,”

Thank you for reminding us – and the American people – of the backroom deal that you struck behind closed doors with ‘Big Pharma,’ resulting in bigger profits for the drug companies, and higher prescription drug costs for33 million seniors enrolled in Medicare Part D, at a cost to the taxpayers of $42.6 billion.

The House is going to pass legislation to repeal that now.  You’re welcome.

And then they go and do something like this:

Many people knowledgeable about the federal budget said House Republicans could not keep their campaign promise to cut $100 billion from domestic spending in a single year. Now it appears that Republicans agree.

As they prepare to take power on Wednesday, Republican leaders are scaling back that number by as much as half, aides say, because the current fiscal year, which began Oct. 1, will be nearly half over before spending cuts could become law.

Now they are calling the 100 billion dollar figure hypothetical.

And Allah points out why even this modest cut will never be possible:

Shouldn’t it be fairly easy to find $100 billion to cut in an annual budget that exceeds $3.5 trillion? Well, yes — except that the GOP’s limiting itself to cutting discretionary spending (Social Security and Medicare are, as ever, completely off-limits)

Until entitlement spending is on the table these kind of cuts won’t happen.

Instead we are treated to an endless barrage of excuses and “don’t waste a crisis” moments. Private businesses too big to fail so throw money at it. Pass the stimulus or unemployment will rise…and rise it still did. Print money or wall street will collapse. Raise the debt ceiling or the borg will take over the planet.

Hell, demolishing the EPA would save us 100 billion. Bam, problem solved, and it took a lowly blogger to figure it out.