“He’s Not A Bad Man, Just A Funny Bugger,” She Said 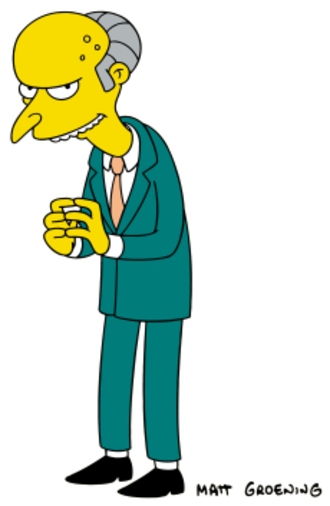 The Lascivious Lecher At Work

In April of 2004, Elizabeth ( a fictitious name) a 19 year old female approached Julian Assange in a Melbourne bar. Assange was a 33 year old student studying mathematics and physics at the university.

“I started talking to him and he just seemed kind of quiet and nerdy. I didn’t think he was sexy or anything. Just strangely alluring for a 19-year-old girl.”

Assange flirted with her by flexing his mathematics skills and kidding her about being ignorant of mathematics and science. This is typical procedure for lecherous types who want to impress and establish superiority over their prey or victims.

They talked until closing time and Assange walked Elizabeth home to a small village in the country. Along the way he kissed her, she was not impressed with his behavior, but neither was she turned off.

“It was like, fine, whatever,” Elizabeth said. “He wasn’t creepy about it, and he didn’t try anything weird.”

Before saying goodnight, they exchanged emails and Assange gave her his card with the image of a lighthouse and he rode the train back to town. No doubt he envisages himself as a guiding light for the rest of the world.

She soon received this email requesting a date:

She doesn’t remember how she replied but she didn’t encourage him:

However, she was shocked when she received a phone call from him at her parents’ house; since, she had not given him her phone number.

The call was understandably strained when he refused to explain how he had obtained her phone number.

“I was really cold because he somehow found out information about me and I didn’t know how and it scared me,” she said.

Undaunted in his quest for conquest, Assange promptly sent an email to chastise her for her phone etiquette; however, the real purpose is to discipline her as a parent would an adolescent and to establish a position of dominance and control.

She says she replied with a coldness to his entreaties; yet his technique is a continual assault of stages and progression, he has already instilled an element of self-doubt and the question of worthiness within his victim, a process that she will never admit to herself.

Assange tried another approach by recalling the romantic aspects of the night they met. 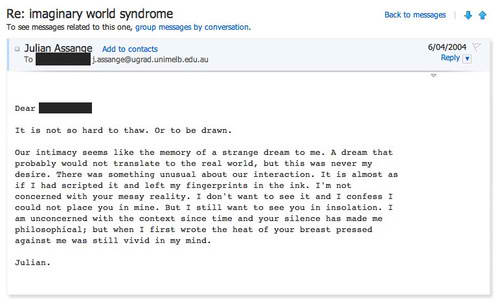 Assange called again and Elizabeth, who was becoming wary of Assange’s persistence, countered by pretending to be someone else, a gambit that Assange assumed to be flirtation and an opportunity. 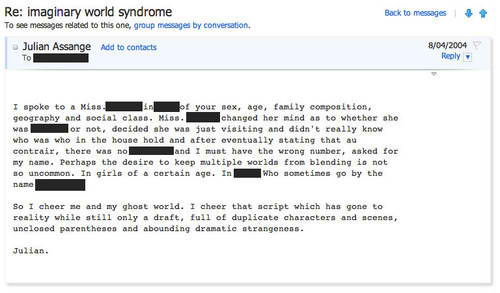 Assange formulated a puzzle to get his phone number to Elizabeth, so she could call him with the satisfaction of having figured out a simple math problem and redeem herself of the ignoble distinction of being a lesser creature who is deficient in math skills. To accomplish this he gave her an equation with her license plate number as part of the known factors. Thankfully, she didn’t fall for his cheap and obvious gambit that was designed to establish Assange’s dominance and omnipotence as well as his willingness to excuse her poor math skills. Elizabeth said she couldn’t call him, so he sent an email asking the best time to call her.

She was left with the cold and bewildering question of how and why did he obtain her license plate number.

At this point, Elizabeth told Assange to quit calling her. And with the dogged persistence that is characteristic of the predator, he told her she might get lucky and be able to contact him through his web site.

Assange finally gave up, but tried to humiliate her with a series of emails meant to hurt her self-image.

Assange’s relationships with women haven’t improved much in the six years since his creepy attempt at wooing Elizabeth. His online dating profile and blogging reveal an insufferable self-styled Don Juan, and he currently stands accused of raping and sexual molesting two Swedish women.

For the record, Elizabeth says she never felt threatened by Assange’s behavior; she viewed it as misguided attempts at courtship by a socially awkward nerd.

Although Elizabeth resisted the predatory seduction of Assange, her comment, “I don’t think he’s a bad person, he’s just a funny bugger”, indicates she was susceptible to his miserable game and is still under his spell to a degree; because she still doesn’t recognize the deception and evil inherent in this deviant behavior. Although Assange’s pathetic attempts at romantic writing only mean his poetic license should be revoked, his hacking into another person’s private life is despicable. He definitely has a problem with women and will probably be in more trouble with women if he doesn’t end up in prison. Assange maintains that his hacking is for purely altruistic motives, he also employs his hacking skills to be a sexual predator.

Epilogue: The author has no training in psychology or deviant sexual behavior, but in the horse business, 90% of your customers are women and after listening to tens of thousands of women talk about life and their experiences while I worked on their horses, I have a vast anecdotal background on the nature of these incidents. Thus I have a fairly good idea how these incidents transpire and of the psyche of the predator.