The Aftermath Of The 2010 Midterms 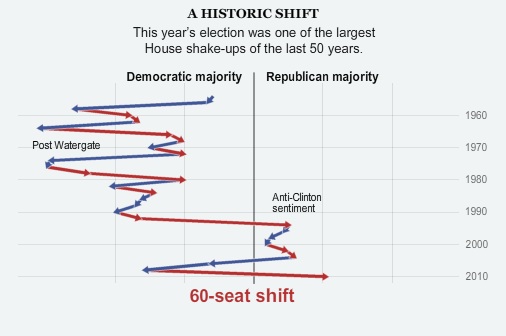 So the aftermath…we are now at 60 seats but 11 races are still in question so the ceiling could be as high as 71:

This was a historic night. This kind of swing hasn’t been seen in 50 years but I think many are not seeing the bigger picture on the wins of the Executives races which will be quite important for 2012 and redistricting.

The wave swept a diverse batch of GOP winners into office, including a Latina in New Mexico, a Latino in Nevada and the daughter of Sikh immigrants in South Carolina.

The GOP pickups were a major blow to President Barack Obama on an already tough night. In addition to Ohio and Iowa, Republicans seized the executive mansions in Pennsylvania, Michigan, Wisconsin, New Mexico, Nevada, Kansas, Tennessee and Oklahoma. More than half of the states will be keys to his reelection.

A bad night for Democrats Tuesday got even worse at the local level: Republicans were on the verge of winning nearly all 17 of the state legislative chambers they had originally set out for on Tuesday, some for the first time in decades, a shift that puts the GOP in the driver’s seat when the congressional redistricting process begins early next year.

The GOP gains were most significant in the Midwest, where the party picked up state House majorities in the Indiana, Ohio and Pennsylvania, and were within striking distance of capturing legislatures in the highly-prized electoral battlegrounds of Michigan and Wisconsin. But Republicans also gained control of both chambers of the New Hampshire and North Carolina legislature, and took the Alabama legislature for the first time since Reconstruction.

The New Hampshire win was a windfall for Republicans, who picked up more than 120 seats to flip the House while also snatching away the Senate, earning a seat at the redistricting table with Gov. John Lynch, a Democrat who narrowly won a fourth term. And the Buckeye State win gave the GOP a measure of revenge: they lost control of the House to Democrats in 2008 by just a handful of seats.

Coupled with wins at the gubernatorial level, the GOP takeovers of those state legislatures means Democrats will be out in the cold when new congressional districts are drawn with 2010 census data.

It was a good night but having just now watched Obama’s speech on the night….he doesn’t get it. It sounds to me like he will not consider any kind of repeal of ObamaCare. No shocker there. Lots of pretty words about listening and blah blah blah but he won’t budge.

Even now he just said that it’s not right that China has a better rail system then us and better technology because of investment in research and business but doesn’t mutter a word about how their Corporate tax rate is lower.

I’ll end this post not on Obama’s speech but the aftermath of those who voted for ObamaCare and Cap n Tax:

Here are the defeated Democratic incumbents broken down based on their votes on the House health care reform bill of November 7, 2009 (HR 3962) and cap-and-trade bill of June 26, 2009 (HR 2454). As it shows, 36 of the 46 Democratic incumbents (78%) who ended up losing were among those who voted for at least one of these two bills.

Defeated Democratic Incumbents Who Voted for Both Cap-and-Trade and Health Care Reform (18):

Defeated Democratic Incumbents Who Voted for Cap-and-Trade Only (11):

Defeated Democratic Incumbents Who Voted for Health Care Reform Only (9):

Defeated Democratic Incumbents Who Didn’t Vote for Either Cap-and-Trade or Health Care Reform (10):