The Audacity Of Narcissism 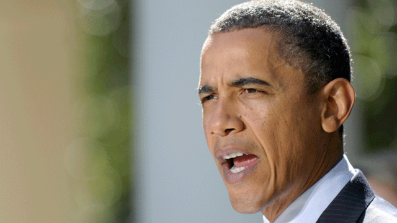 Reality Is A Stern Task Master

President Obama in an unbelievable display of arrogance and hyperbole has stated in the New York Times, Magazine, that the new Republican Congress will now be forced to learn to work with him. Obama explains that he will have the Republicans in a position where they will have no choice but to work with him (as if he will train them like dogs):

“either because they didn’t do as well as they anticipated, and so the strategy of just saying no to everything and sitting on the sidelines and throwing bombs didn’t work for them, or they did reasonably well, in which case the American people are going to be looking to them to offer serious proposals and work with me in a serious way.”

The president’s approach to defeat and rejection is at least novel and bold, but a bit lacking in realism; however, reality is a stern task master and the president is about to learn that he must work with the American people instead of relying on his own radical ideology. President Obama obviously has plans of intimidation for congress while pleading to the American people to accept his Socialism and One-Society, Open Borders nonsense, a plan that might have worked with RINOs, but RINOs are fast becoming an endangered species, because of a new Conservative commitment among the American people. Many of whom are planning to make the RHINOs like Graham, extinct in the near future.

The president is now conceding that he might possibly be mortal and that the public expected way too much from him. He also confirmed once again that he should never speak, not even in an interview, without a script and a teleprompter.

“The mythology has emerged somehow that we ran this flawless campaign, I never made a mistake, that we were master communicators, everything worked in lockstep,” Obama is quoted saying. “That’s not how I look at stuff, because I remember what the campaign was like. And it was just as messy and just as difficult. And there were all sorts of moments when our supporters lost hope, and it looked like we weren’t going to win. And we’re going through that same period here.”

A quaint play on words, but little more than desperation from a man facing catastrophic losses, by associating his successful 2008 campaign with the impending disaster looming for 2010. He is flustered by being portrayed as a common tax and spend Democrat: surely the people should realize that he has taken the concept beyond limits never thought possible.

Among the regrets the president said he felt during the 111th Congress is letting Republicans make him out to be “the same old tax-and-spend liberal Democrat.”

Obama said he also realized too late that “there is no such thing as shovel-ready projects,” a familiar refrain made by the president when he was trying to sell the stimulus package.

“There are almost 100 shovel-ready transportation projects already approved,” he said in August 2009. As recently as July of this year, he said, “Shovels will soon be moving earth and trucks will soon be pouring concrete.”

“Right now what I’m hearing from Democrats is the president is only useful for fundraising,” he said.

From his rants a few days ago and the exasperation of Soros with his billions, it is doubtful if the president can even be counted on for raising campaign funds.

The president also feels that he failed to communicate well, he admits his administration took “perverse pride” in being focused on policy at the expense of public relations. He now realizes “you can’t be neglecting of marketing and PR and public opinion”. The president should have included ‘neglecting of telepromptering’ and a script; otherwise his genius or lack of genius becomes all too obvious.

Former White House Secretary under Bush, Ari Fleischer, maintains the message is not the problem.

“I think he’s more out of touch than anybody ever thought if he believes the problems are from marketing and not substance. Cap and trade its not a communication problem it’s a substance problem.”

It is becoming more and more obvious to even the least astute of Americans that a Community Organizer with an Affirmative Action pedigree is hardly qualified to run the country despite his charisma and skin tones; unfortunately, he chose the wrong career path, he could have been an overwhelming success as a judge on American Idol. Audacity and weasel like rationalizations of 20 months in office will hardly be a consoling factor to those Americans that have lost their homes and fortunes to the asinine Socialist Dreams of the Great Pretender in the White House; who wasted valuable time pursing his personal rainbows, when that time should have been spent rebuilding our economy. Now he has the audacity to assume he will have power over the new Republican congress; hopefully, that will be the high water mark of his audacious behavior before he is assigned his well earned spot as an embarrassing foot note of history.