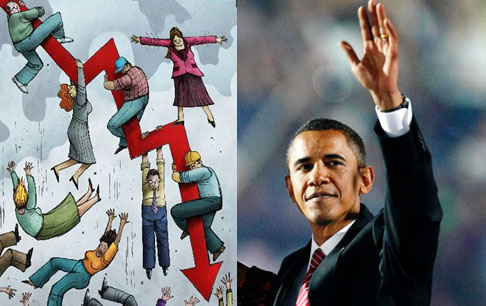 Did you know the recession ended? Seriously…..the Obama apologists are trying to sell that manure but the majority of the nation knows better:

Economic experts may believe the recession is over, but try telling that to the public.

Seventy-four percent of Americans believe the economy is still in a recession, according to a new CNN/Opinion Research Corporation poll. Only 25 percent think the downturn is over.

One-third of Americans say the recession is serious, while another 29 percent characterize it as moderate.

The perception, based on their own individual economic conditions, is that there is no way in hell the recession is over and that perception means they will hold back on spending which, along with Obama’s anti-business attitude, keeps the economy nosediving.

On top of that housing looks like its falling flat once again:

The collapse of the housing sector was a major driver of the nation’s economic woes. Now, a new wave of weakness in housing poses risks to the fragile economic recovery.

Fresh data released this week offer a portrait of a residential sector that is muddling along at low levels, though nothing resembling the freefall of 2006 to 2009. On Thursday, the National Association of Realtors said that sales of previously owned homes rose 7.6 percent in August – a disappointing result, as analysts had hoped for a stronger bounce back after sales tumbled 27 percent in July.

But hey, bring a comedian into Congress….it will make everyone feel better: