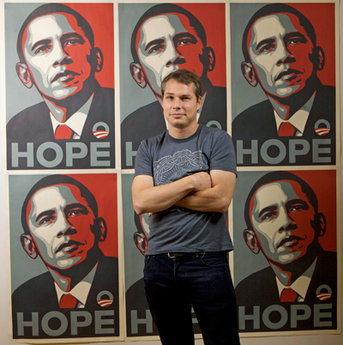 Shepard Fairey, the artist who created the image of Obama that became an icon of Obama forces during the 2008 campaign, admits that Obama isn’t the great vehicle of Change and Hope they were counting on: he says he understands why so many people have lost faith in the false messiah, his own disappointment is a common feeling that has affected many Democrats who had placed great expectations in the Obama.

Fairey explained the poster was a single image that was meant to convey the issues that he considered important health care, helping labor, and curtailing lobbyists.

The lobbyists’ and their influence ended up being nothing more than business as usual if not more so. Helping Labor has become a matter of promoting national unions with international aspirations and health care has become an albatross around the neck of Democrat incumbents up for reelection.

Fairey’s much-reproduced portrait of Obama — head tilted slightly upward, gazing into the distance, with the word “Hope” emblazoned underneath — captured the imagination of Democrats and unintentionally tweaked Hillary Rodham Clinton, whose husband had been elected as “The Man From Hope.” Hundreds of thousands of posters and stickers with the “Hope” image were distributed to supporters throughout the country. But that was just the beginning. It’s been reproduced countless times on the Internet, and a parody version, with Obama as The Joker and “Socialism” in place of “Hope,” is a favorite at Tea Party rallies.

Maybe it was inevitable that Hope would fade. Fairey’s blue-and-red image was altered from an Associated Press photograph of Obama, and the artist is embroiled in an ongoing lawsuit over use of that picture. (He didn’t discuss the case with National Journal.) Fairey, who at 40 is no kid himself, said it’s easy to see why young voters are down on Obama and the Democrats. He lamented that health care reform was watered down, Tea Party activists have been emboldened, and his man has fallen short on bold campaign promises like closing Guantanamo Bay.

“There’s a lot of stuff completely out of Obama’s control or any of the Democrats’ control,” Fairey allowed. “But I think there’s something a little deeper in terms of the optimism of the younger voter that’s happening. They wanted somebody who was going to fight against the status quo, and I don’t think that Obama has done that.”

To be sure, Fairey still supports Obama, and he says he would use his talents to assist the president’s re-election efforts in 2012. But he said that he couldn’t design the same Hope poster today, because the spirit of the Obama campaign hasn’t carried over to the Obama presidency. 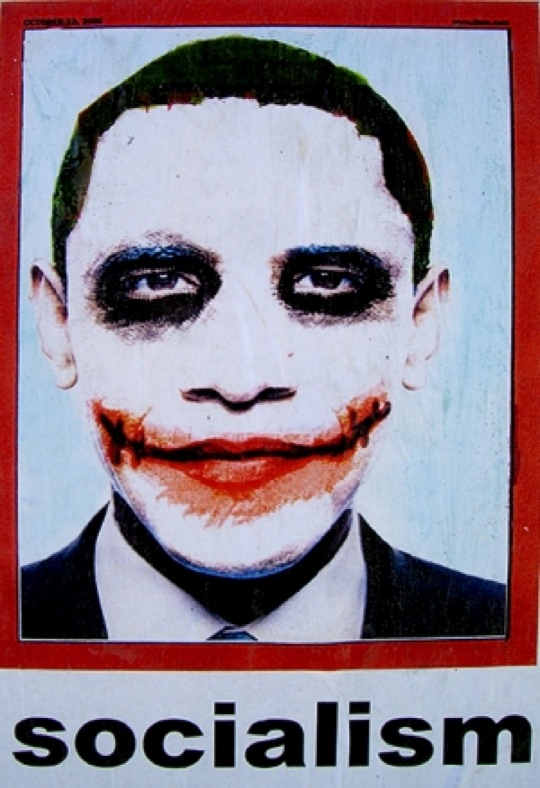 There were many Americans seduced by the feel good Madison Avenue campaign of Obama, but the trouble with hype is that after all the BS, you must be able to produce something, four years is a long time to run on hype and lies. The great leader and community agitator who supposedly had the skills and knowledge to bring the country together has caused a much greater division in the country and weakened the country in the eyes of the rest of the world. His exposure as a failure has been so obvious that committed Democrat incumbents are distancing themselves from Obama and their votes on his agenda.

Yes Fairey, don’t feel alone in your disappointment, Independents and Democrats are admitting to themselves that the Obama image that you helped create is nothing more than an allusion that they wanted to believe, against common sense.

I remember when Obama had a plan to have the government (taxpayers) pay artists to create art that supported his programs.

Though Shepard Fairey was not mentioned, that I recall, I bet he would have been a recipient of some of that largess.

There was a mini-exodus from the Obama-backed Arts group after some conference call exposed their plans.

PS:
I wonder how much AP will get from Shepard Fairey when the lawsuit is settled?
I know China just LOVES to take our stuff and make cheap knock-offs out of it, but, so far, we are not allowed to do that here.

Hope and change is all well and good, but it is an empty promise with no substance. Too bad more Americans didn’t see it earlier.

That dude looks all embarassed 😥 standing in front of the boob in chief pic and rightly so.
I’d be soooooooooo 😐 embarassed if I had voted for the boob.

And now he’s geting sued by Ap. 😛 Way to go obot ❗ You were warned that B Hussein is bads news. But you wouldn’t listen and you are how old ❓ 40 😐

The problem is – or at least _one_ of the problems is – that Labor and the Lobbyists are one and the same. The “little guy” can’t influence the muckety-mucks of Labor any more than the rest of us “little guys” can influence Congress. Once they get in power, it’s a matter of doing whatever they have to do to stay in power.

Boxer the work horse supported the failing programs to the end when the dogs slaughtered him. The pigs then sent him off to the knackers in trade for a case of wiskey. There are quite a lot of boxers awaiting the bone wagon.

So much for “Hope!” All that “feel good” socialist garbage never seems to pan out out here in the real world where the metal meats the meat. I guess when you are an 18 year-old product of public education where you have spent the last 12 years being spoon-fed the socialist agenda from teachers not much older than yourself who in turn have been educated in our universities to be cynical puppets of the left-wing Constitution haters, HOPE and CHANGE probably sound right up your alley! Well, gee sunshine, guess they just don’t teach reality in ART SCHOOL… The one thing you can not remove from the equation is human nature; someone will always take advantage of someone, even the false messiahs! So sorry that little Mr. Fairey had to find out the hard way… Personaly, I will not be content to replace Democrats with Republicans now that the tide has turned… I want the whole lot of the lying, cheating clowns sent packing and replace them with those who will bend their will to the people! God Save the Tea Party!!!

He seems to represent a LARGE part of the population now…. they all were taken in, and are not happy to have been snookered…. many will have their say tomorrow. I’m really curious to see just how HARD the vote tilts, one way, or the other.