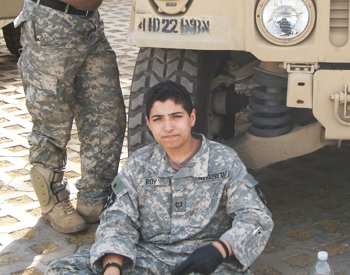 Iraq war critic, Thomas Ricks, links to a WaPo story by retired Army captain Blake Hall that tells a different perspective on the narrative of the war:

“One day the Qaeda came to my school. They say, ‘You are not students anymore! Put away your books! Now we show you the path of jihad!’ My two best friends say to them, ‘We are students trying to learn. We don’t want to do the jihad.’ ”

Roy gave me a wan smile. “Then, they gather the school in one place, they kneel them down, and they cut their heads with the knife.”

“Yes, sir. I walk to the base the next day and give them my name to work for you. I hate the Qaeda.”

Read the whole piece. You won’t understand the title of this post until you do. (And here is the NYTimes article referenced toward the end of Hall’s op-ed).

One of my favorite excerpts:

Roy and I were sitting on a smooth concrete floor with our backs against a concrete wall. We were with one of my sniper teams in an apartment overlooking a four-way intersection. I was thinking about the course of the war, from the early days of the invasion in 2003, when the Iraqis seemed overjoyed and the giant statue of Saddam Hussein toppled, to the most violent days of the insurgency. I wasn’t sure what to make of the shift.

“Roy, did most of the Iraqis always hate us?” I asked.

“No, sir. When the Americans first came, everyone was very happy.”

The snipers and I laughed.

“But Roy, your mom and your family is in Baghdad. You can’t seriously think nuking Iraq is the answer.”

“You’ve been hanging out with the guys too long, Roy.”

“Wehl alraght.” [picked up the Kentucky accent from Hall’s driver, as relayed earlier in the article- ws]

The snipers collapsed into fits of laughter.

If there is one thing the Iraq War did, it was to unite Iraqis and U.S./Coalition forces against the common threat of al Qaeda and expose their brand of Islam to the eyes of the Muslim world.

Iraqi interpreters have been invaluable allies in the war effort, aiding our soldiers at great personal risk to not only themselves, but also to their families. Regarded as traitors by some Iraqis and not fully trusted by our side, most deserve our thanks; not assassinations.

Back in June of this year, one Iraqi interpreter was gunned down by his son and nephew who were part of an AQI-linked group.

For those who missed the 2006-7 60 Minutes segment about the plight of Iraqi “terps” when it aired: Left Behind