The seating change was prompted by the resignation of veteran UPI reporter Helen Thomas.

According to Ed Henry, the senior White House correspondent for CNN and member of the WHCA board, the Associated Press will move to the front-row middle seat formerly occupied by Thomas.

Fox News will replace the AP in its former seat, also in the front row, and NPR, which lobbied for Thomas’ seat along with Fox and Bloomberg News, will take Fox’s former seat in the second row.

From Major Garrett, who will be taking the Fox seat: 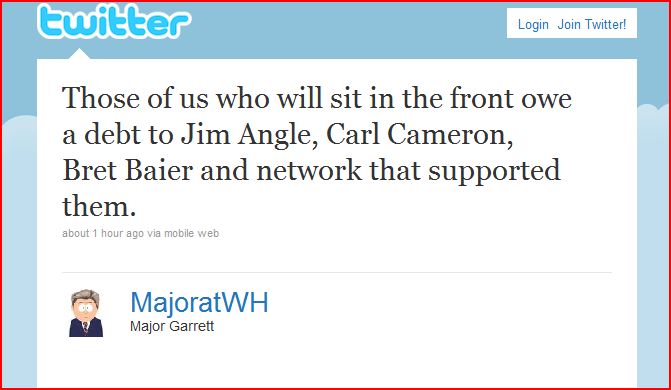 Congratulations to Fox and Garrett. He has earned a lot of respect because he doesn’t wear his politics on his sleeve…instead, he reports. You know….what reporters are supposed to do.

Don’t get too much of that nowadays.

I sure hope the seat was disinfected and sanitized or replaced..

Surely, there are a ton of liberals turning over right now and gnashing teeth.

I think this may have something to do with the snubbing obambi’s been giving to his pet media. Remember the media backing Fox got when the WH tried to exclude them? Obambi’s alienated a considerable group–Supreme Court Justices, all Republicans, police, convention city mayors, the anti Guantanamo Bay protestrs, etc, etc.

Am I surprised? Not really. I’m guessing the front-row seat offered to Fox will have a shelf life expiring some time after the elections in November.

Maybe it’s become the designated seat for the court jester.

Says a lot that NPR has to take a back seat to Fox!

If “NPR has to take a back seat to Fox” it’s because nobody listens to NPR. NPR preaches to the choir. People from across the political spectrum — including the much-courted Independents — tune in regularly to Fox.

Please send Glenn Beck so that every liberals head explodes, then follow it with Hannity so any survivors are finished off….