Pfc. Bradley E. Manning is NOT a Hero

Not everyone who serves is deserving of respect. 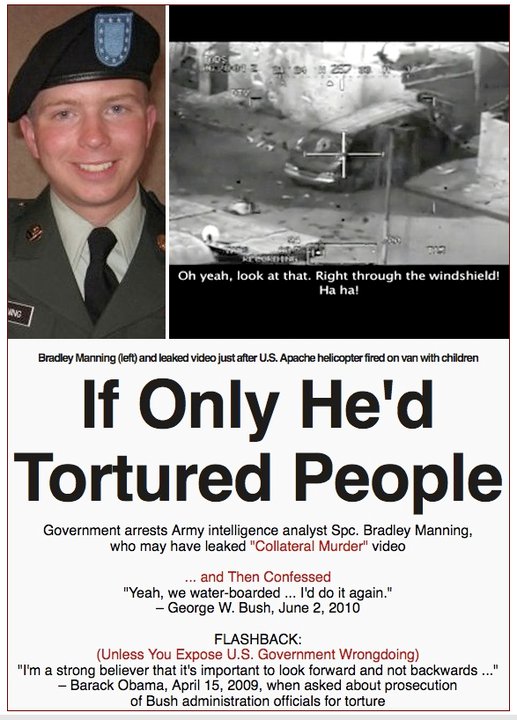 Last April, WikiLeak.org and its owner, Julian Assange, edited and published a 2007 footage they entitled “Collateral Murder”, which purported to show an American Apache helicopter killing unarmed civilians, including news reporters, in Iraq.

While WikiLeak.org is slated to release a new video of an alleged “massacre” by U.S. forces in Afghanistan, a 22 year old Pfc Army intelligence analyst serving in Iraq was detained about a month ago, accused of being the source of the leaked “Collateral Murder” video. Charges have now been brought:

BAGHDAD — An American soldier in Iraq who was arrested on charges of leaking a video of a deadly American helicopter attack here in 2007 has also been charged with downloading more than 150,000 highly classified diplomatic cables that could, if made public, reveal the inner workings of American embassies around the world, the military here announced Tuesday.

The full contents of the cables remain unclear, but according to formal charges filed Monday, it appeared that a disgruntled soldier working at a remote base east of Baghdad had gathered some of the most guarded, if not always scandalous, secrets of American diplomacy. He disclosed at least 50 of the cables “to a person not entitled to receive them,” according to the charges.

You can see a complete list of the charges here on the Help Bradley Manning website. If you think that site is stomach-churning, check out the Facebook fanpage (another one here and here), with comments like this:

while its very easy to bash some soldiers as being cruel and callous, these soldiers were doing exactly as they were trained by the Army. The Army uses Racism, hatred, and nationalism to train their soldiers to dehumanize the people of Iraq (or Afhganistan)
Soldiers in a sense are re-programmed to feel no emotion for c…ivilians. Its a trigger mechanism that when soldiers do or see something that an average person (non military) would reel or anguish over, soldiers are taught to push through that emotion.
I think that instead of blaming soldiers for the actions that are not only sanctioned by but encouraged by the leaders of our government, we should be focusing on the system that trains these soldiers to behave that way. If we do not demand responsibility from the nations leaders then nothing will change, and soldiers will still be trained in Racism, and hatred!

So what is Manning’s beef?

With his custom-made “humanist” dog tags and distrust of authority, Bradley Manning was no conventional soldier.

Ostracized by peers in Baghdad, busted for assaulting a fellow soldier and disdainful of the military’s inattention to computer security, the 22-year-old intelligence analyst styled himself a “hactivist.”

Manning is a slight, boyish-looking son of divorced parents from Crescent, Okla., population 1,400. His Facebook page shows him smiling, with stylish, upswept hair and a stated affinity for gay-rights groups including Repeal the Ban, which seeks to end the “don’t ask, don’t tell” policy on homosexuals serving in the U.S. military.

Growing up in a house he shared with his parents and older sister, Manning had a sharp intellect and an interest in science, history and computers, said Jordan Davis, a boyhood pal. He said Manning also was determined at a young age to join the Army.

“It always seemed to me that Bradley was actually was more patriotic than probably even your average person,” he said.

Chera Moore, another childhood friend, described Manning as highly intelligent and helpful. But she said he had “anger issues” and could get furious when people disagreed with him.

When Manning’s parents split up in middle school, he left Oklahoma to live with his mother in Wales, Davis said.

After Manning graduated from high school and returned to Oklahoma, he quit or lost jobs in food service and retail in Tulsa, Davis said. Settling briefly in Chicago, Manning moved in with an aunt in Potomac, a Maryland suburb of Washington, D.C., and took community college courses before joining the Army in 2007.

Davis said Manning trained in Arizona, probably at Fort Huachuca, where he trained in compiling intelligence reports. Such reports help the military determine changes in enemy capabilities, vulnerabilities and probable courses of action.

In recent months, Davis said, Manning seemed to have grown more aware of social issues, including the gay-rights movement.

There’s some speculation going on, regarding Manning’s sexual identity as motive. So is this what it’s really about and not some “conscientious objection” to our war efforts, “terrorizing Iraqi and Afghan children”?

According to partial chat logs Lamo shared first with Wired.com, Manning started communicating with Lamo on May 21, a couple weeks after he was reduced in rank from specialist to private first class for assaulting another soldier.

In one of many personal asides, Manning told Lamo he had been the only nonreligious person in a town that had “more pews than people,” and that he had custom-made dogtags reading “humanist.”

Manning said he was pending discharge for an “adjustment disorder,” according to the chat logs, but Army spokesman Lt. Col. Eric Bloom said Manning wasn’t facing discharge when he was detained May 29.

The chats reveal Manning’s frustration at being “regularly ignored” at work.

“I’ve been isolated so long,” he wrote. “I just wanted to be nice, and live a normal life … but events kept forcing me to figure out ways to survive … smart enough to know what’s going on, but helpless to do anything.”

According to the chat logs, Manning’s turning point came when he watched Iraqi police detain 15 people for printing anti-Iraqi literature that turned out to be a scholarly critique of Prime Minister Nouri al-Maliki.

“After that … I saw things differently,” he wrote. “I was actively involved in something that I was completely against.”

Lamo told the AP he grew concerned “when it became apparent that he was leaking classified information to a foreign national” — Wikileaks’ Australian founder Julian Assange. Early in their online conversations, Manning told Lamo that he had sent 260,000 State Department diplomatic cables to Wikileaks.

Lamo said he turned the chat logs over to Army criminal investigators after consulting with a friend who had worked in Army counterintelligence.

“It was a combination of an act of conscience and an act spurred by my understanding of the law,” Lamo said. “I did this because I thought what he was doing was very dangerous.”

Ellsberg said he considers Manning and Assange heroes for publicizing information the government wanted suppressed. He said Manning’s alleged leak was possibly more significant than his own, which exposed the secret expansion of the Vietnam War.

“He is the first person in 39 years to do something comparable to what I did — and really better than what I did, because it’s current,” Ellsberg said.

Both Ellsberg and Gabriel Schoenfeld, an author who supports cracking down on leakers, said that the Obama administration has gone further than the Bush White House in pursuing alleged whistleblowers.

The charges against Manning follow April’s indictment of former National Security Agency worker Thomas Drake for allegedly lying and obstructing justice in an investigation of classified information leaks to The Baltimore Sun.

The Army’s decision to charge Manning also followed a federal grand jury’s reissuance in April of a subpoena seeking the names of some sources for journalist James Risen’s book, “State of War: The Secret History of the CIA and the Bush Administration.”

Schoenfeld, author of “Necessary Secrets” and a senior fellow at the conservative Hudson Institute, said leaks of military information during wartime run counter to America’s interests.

“We’re serious about trying to win, and it’s extremely damaging to the morale of our troops,” he said. “It inflames the local opinion, where we have a real battle for hearts and minds.”