Robert Byrd, WV Democrat Senator, and former Kleagle of the KKK, has died at the age of 92. 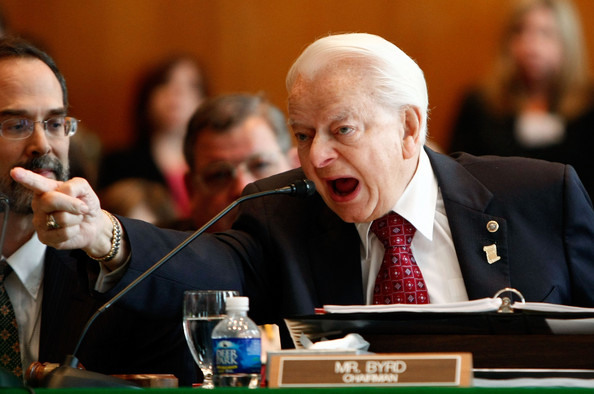 Best known for his fiery rhetoric on the Senate floor as well as his ability to bring home barrels of cash for his state, Byrd also has a rather colorful past that his supporters would rather whitewash.

For many years Byrd served as a Kleagle (recruiter) for the KKK.

Senator Byrd famously opposed the integration of the armed forces under President Truman famously stating that he would never fight:

“with a Negro by my side. Rather I should die a thousand times, and see Old Glory trampled in the dirt never to rise again, than to see this beloved land of ours become degraded by race mongrels, a throwback to the blackest specimen from the wilds.”

Even after “leaving” the Klan, Byrd continued to have high regard for it, writing to the Klan’s Imperial Wizard in 1946:

“The Klan is needed today as never before and I am anxious to see its rebirth here in West Virginia.”

Senator Byrd participated in the filibuster of the Civil Rights Act of 1964, voting against it after cloture was achieved.

The repeated election victories by Senator Byrd, even after his racism was laid bare, serve as shining moments in the history of the Democrat Party.

Of all the glittering jewels available regarding Senator Byrd this moment, preserved on video is absolutely priceless:

Ah, yes, the people that the Democrats proudly embrace…put into power…then repeatedly return to office.

Time and old age have finally done what the Democrats of WV specifically, and the Democrat Party in general could never bring themselves to do: strip Robert Byrd of power, control, and influence.

There’s much, much more that could be written about Byrd. Out of respect for his family, I will refrain at this moment.

Exit question: Will he be buried with or without his hood?