Obama’s Lowest Approval Rating Yet & Strangely The MSM Is Silent; Unlike When Bush Hit That Low 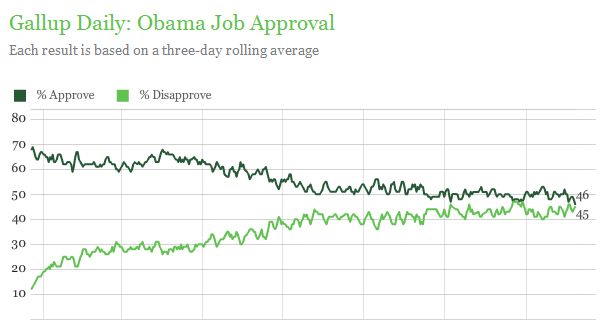 Lowest poll numbers from Gallup yet. Yeah, I know, shocking it isn’t but let’s look at the Washington Post when Bush hit 46 the first time:

Six months before the November election, President Bush has slipped into a politically fragile position that has put his reelection at risk, with the public clearly disaffected by his handling of the two biggest issues facing the country: Iraq and the economy.

Bush’s approval rating in the Gallup poll fell to 46 percent this week — the lowest in his presidency by that organization’s measures. Fifty-one percent said they disapprove — the first time in his presidency that a bare majority registered disapproval of the way Bush is doing his job. A Pew Research Center survey released Wednesday pegged Bush’s approval at 44 percent, with 48 percent disapproving.

How about when he hit 45 for the first time….the next stop on Obama’s trainwreck of a Presidency.

President Bush’s approval rating has fallen to 45%, the lowest point of his presidency, according to a new USA TODAY/CNN/Gallup Poll.

Another article from the Washington Post the very next day is here.

Oh yes, how about CNN? The poll numbers were highlighted during a Anderson Cooper segment and a Jack Cafferty segment that day.

Ok, ok….so the big news of that drop was the Schiavo case so lets give the MSM the benefit of the doubt and check when he hit 45 again…June of 2005.

(CNN) — The number of Americans disapproving of President Bush’s job performance has risen to the highest level of his presidency, according to the CNN/USA Today/Gallup poll released Monday.

According to the poll, 53 percent of respondents said they disapproved of Bush’s performance, compared to 45 percent who approved.

COOPER: Hey. Torie, let me start off with you. In the latest CNN- “USA Today” Gallup poll, President Bush’s approval number is down to 45 percent; 37 percent say he has a clear plan in Iraq. That’s down from 49 percent. How worried is this White House?

CLARKE: Well, they’re not worried about their polls. They’re worried about having a really serious and honest conversation with the American people…

COOPER: Wait a minute, you are telling me they’re not worried about the polls?

CLARKE: … about what’s going on in Iraq. I can’t speak for all of them, but I can tell you what they worry about more, which is what is going on in Iraq, and having a very serious conversation tonight with the American people. What’s going on, where the challenges are, where progress is being made, because there is some progress being made, and a caution to the people that this could last for sometime and it will be very, very tough. That’s what they’re really focused on.

COOPER: Paul, do you believe that?

PAUL BEGALA, CNN POLITICAL ANALYST: Well, yes, in part, but, at the same time, they have to be focused on the polls, because that’s how we gauge whether the public supports it.

Let’s see if CNN, the Washington Post, the USAToday and other media outlets will report on the 46% approval rating let alone when it 45.

Politico has saved the MSM’s bacon a few times…and to the rescue they ride again but still no sign of any doom and gloom from the others all week. Last 30 days?

Amazing what a D next to the name can do to our MSM eh?