Some lobbyists are getting worried in Massachusetts with Martha Coakley getting beat by Scott Brown so what do they do? They do a fundraiser:

With Democrat Martha Coakley in trouble in the Massachusetts special election to fill Ted Kennedy’s seat, Democrats could lose vote No. 60 for President Obama’s health-care bill. In response, an army of lobbyists for drug companies, health insurance companies, and hospitals has teamed up to throw a high-dollar Capitol Hill fundraiser for Coakley next Tuesday night.

Of the 22 names on the host committee–meaning they raised $10,000 or more for Coakley–17 are federally registered lobbyists, 15 of whom have health-care clients. Of the other five hosts, one is married to a lobbyist, one was a lobbyist in Pennsylvania, another is a lawyer at a lobbying firm, and another is a corporate CEO. Oh, and of course, there’s also the political action commitee for Boston Scientific Corporation.

All the leading drug companies have lobbyists on Coakley’s host committee: Pfizer, Merck, Amgen, Sanofi-Aventis, Eli Lilly, Novartis, Astra-Zeneca, and more. On the insurance side of things, Blue Cross/Blue Shield, Cigna, Humana, HealthSouth, and United Health all are represented on the host committee. 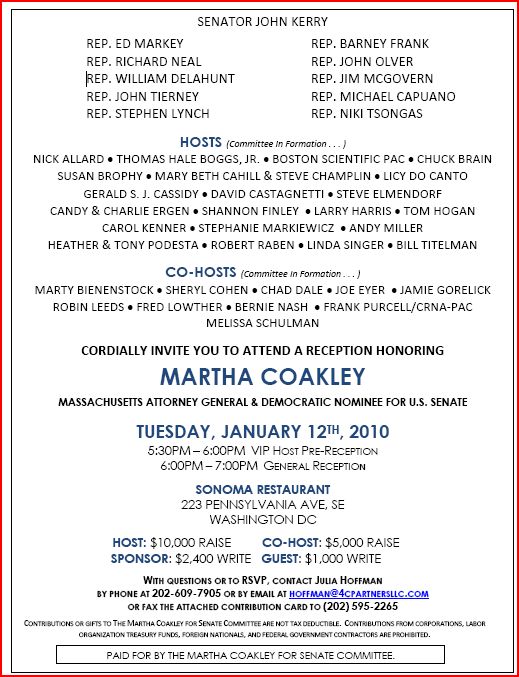 And the same night she is in bed with big pHarma and the insurance companies she tries to trash Brown by alleging that “extreme right groups,” and those evil Tea Party groups, are backing him:

She alleges all this outside…..friggin OUTSIDE….of the fundraiser thrown by the health care lobbyists.

And no…..this was not a SNL skit. She really did it.

[…] their weak position while begging for funds for a last minute wave of negative attack ads. And as Curt notes, Coakley flew to Washington, D.C. Tuesday night for a high priced fundraiser with big money […]

[…] John McCormack’s story in the Weekly Standard. After answering questions outside a fundraising event with lobbyists in Washington, Massachusetts’s Democratic nominee for the U.S. Senate seat in next […]