Why are Milblogs falling silent today? 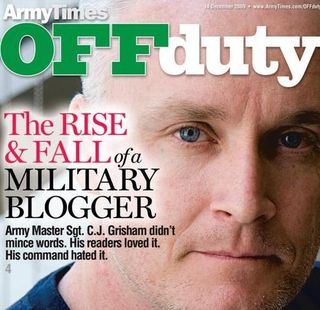 “During the invasion of Iraq, Grisham took down a squad of Iraqis when his counterintelligence detachment got pinned down in an ambush. He earned the Bronze Star with “V” after rushing through the gunfire by himself with just a 9mm pistol and a hand grenade.”
–Mudville Gazette (read all of it)

I’m sorry to say that this will not be the post I want to write, but the one that I allude to. What do I mean by this? Well, I’ve been remiss in following the plight of CJ, of A Soldier’s Perspective, due to my own personal activities (which has seen me engaged on life support blogging, in general). But his is a story that I feel is important to cover, because it not only affects him (one of the finest patriots this country has, and everything you’d want in an American soldier), but affects everyone.

I’m sure some or most readers of FA are already familiar with CJ and what’s going on. But for those who don’t, I will link you to others who have done a fine job of covering this (Bookworm does an exemplary job of summarizing in a nutshell, here):

Partial list of participating players, by way of Greyhawk:

If you are caught up with the story and want to lend your support to CJ, one means to consider is the legal fees he is taking on in fighting back: Grisham Legal Fund.

Recently, however, while living in Huntsville, he got into a wrangle with his kids’ school over a fairly picayune issue (the unexpected cost of newly mandated school uniforms). The school, of course, reacted hysterically and with great hostility, going so far as to report CJ to his superior officer. (I can assure you that, if someone working for Sprint got into a similar wrangle with a school, the school would not report him to his boss.) This reaction shouldn’t surprise anybody, of course. As Kissinger said once he entered the world of academia, “University politics are vicious precisely because the stakes are so small.” Those stakes are even smaller at elementary schools.

Despite recorded evidence to the contrary, the “VP of Membership” for the elementary school (whatever the heck position that is) contended that CJ wasn’t merely uncivil, but was actually threatening. In an open (and illiterate) letter on facebook, this gal forthrightly explained why she had to take a stand against CJ:

This has moved beyond a uniform issue, [sic] this had became a personal vendetta between everyone. Mr. Grisham felt as if his Constitutional rights were violated. I ask you the question [sic] call me a liberal or tratior [sic] to our country if you must, but how many others [sic] rights were violated during interogations [sic]? How many of them were innocent? I am not ignorant to [sic] what goes on during war by any means. I know first hand how they rape and toture [sic] their male captives, [sic] I’ve seen the physical wounds that many civilians would not believe.

(Weirdly, given her Code Pink views, the same gal appears to be a Glenn Beck fan. Go figure.)

In other words, the V.P.’s side of the vendetta had nothing to do with CJ’s concern about school uniforms.. To that one liberal, CJ is the symbol of the evil military and she was going to strike a blow against the military by destroying this one man.

That’s not the only hit CJ has taken. CJ is at the center of a bigger storm, and it is one that affects all military bloggers: the military, which originally was reasonably supportive of (or at least passive about) milblogs, has become very hostile to them. Blackfive explains:

[M]ilblogs are facing an increasingly hostile environment from within the military. While senior leadership has embraced blogging and social media, many field grade officers and senior NCOs do not embrace the concept. From general apathy in not wanting to deal with the issue to outright hostility to it, many commands are not only failing to support such activities, but are aggressively acting against active duty milbloggers, milspouses, and others. The number of such incidents appears to be growing, with milbloggers receiving reprimands, verbal and written, not only for their activities but those of spouses and supporters.

You can read more about both CJ’s travails at the hands of the military and about the general military attitude right now towards blogging here, in this Army Times article.

[…] This post was mentioned on Twitter by BostonMaggie, FloppingAces. FloppingAces said: Why are Milblogs falling silent today?: “During the invasion of Iraq, Grisham took down a squad of Iraqis when … http://bit.ly/6lS0LI […]

Whatever with the liberal code pink-O who is trying to destroy him. I would expect no less from her. However, I think that his boss should look into her claims and once invalidated, take her down hard. Expose her for what she is and even ask the school to remove her.

While stationed at a certain Air Force base as a Security Policeman(LE), there insued a pissing match between the local police force and the military. Why? Because a certain civilian policeman felt he could come on base and go more than three times the speed limit, through a school zone and in front of base headquarters without repercussions. He was wrong!

The local police force decided to sit outside the base and hit military people for every little driving infraction. It got worse and the mayor was standing behind his men.

It ended when the base commander made a few calls. The governor was not too thrilled to hear that the city would be blacklisted and that the base was “in danger” of moving – which means untold amounts of money being lost to the local town & state.

He came down hard on the mayor and the police chief.

Moral: You don’t piss off a base commander & a 3-star who is over that command.

The pink-o should be taught her lesson accordingly.

On the military side of things, I want to know more as to the reasoning behind the military push to silence blogs.

As much as I learned about piecing together bread crumbs from monitored phone conversations during the Vietnam war, I could see some valid reasoning behind them coming down hard.

While the free-speech part of me screams out against any form of censorship, I can understand that they military COULD BE worried about the sensitive information people un-wittingly put out there.

(For example: people who were posting a certain program’s output on the internet – the output contained their Windows product key which anyone could then use. Or those who post things to facebook like “Looking forward to going to X for Christmas! I am so excited!!!” and have their full addresses available – HELLO ATTENTION THIEVES! VACANT HOUSE FOR THE TAKING!”)

It only takes small things to be posted. Marriage problems? Financial issues? And the next thing you know, someone is working for China gathering intel.

If that is not along the lines of military thinking on blogs, then I want to hear it.

Per the Army Times account, the school incident is not the first, nor only snooping/intimidation into CJ’s blogging.

A summer of dissed content
Last summer Grisham got into hot water when someone complained to officials that he encouraged readers to vote against gun control measures, called for a wholesale changing of the guard in Congress and questioned Obama’s truthfulness.

In a blog section titled “Obama is wrong for America,” he wrote: “The reality is that the American people can NOT take the President at his word.”

At least that’s what he assumes was the problem based on the questions investigators with the Army Intelligence and Security Command’s inspector general asked him.

The IG closed the case without further action. Grisham filed a request for a copy of the report but still hasn’t seen it. “Four months later I have yet to actually see any of the IG complaints against me or where I might have done anything wrong,” he said.

The IG’s office did not return phone calls requesting comment.

It after that when CJ was fired from his intel position as a first sergeant at Redstone…and also following a radio interview where he admitted he was suffering from PTSD.

Interesting that the outspoken CJ has been blogging his opinons for six years, and only under the Eunuch in Chief’s command is he being silenced. One may conclude the mob tactic mentality of the WH is being spread thru military command.

One may conclude the mob tactic mentality of the WH is being spread thru military command.

Unfortunately for CJ and other warriors that have been open with their thoughts, they now have a vindictive, petty, sob to answer to. Similar, the Navy SEAL team, everything is “under new management” and management wants that to be known asap.

Amazing how quickly some in military command show their true colors, lack of spine and brown noses so soon after the changing of the guard.