The Other Hero at Ft. Hood 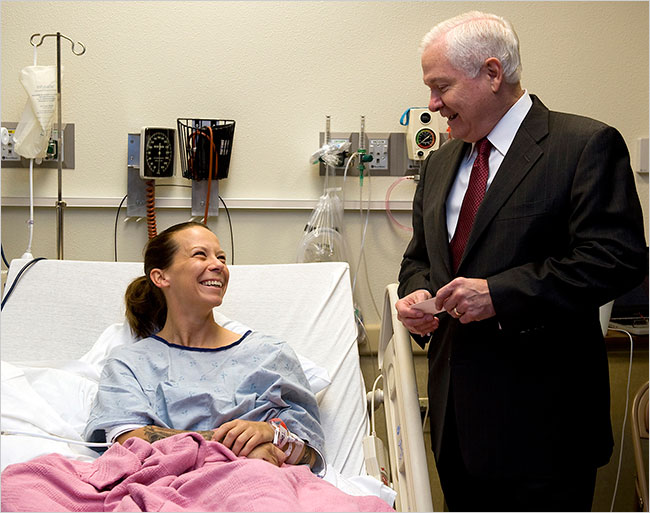 Not to take anything away from Sgt. Munley, who is indeed a hero, more information each day is coming to light. From the NYTimes, we have this eyewitness account of the actions of Munley’s fellow officer that day:

The witness, who asked not to be identified, said Major Hasan wheeled on Sergeant Munley as she rounded the corner of a building and shot her, putting her on the ground. Then Major Hasan turned his back on her and started putting another magazine into his semiautomatic pistol.

It was at that moment that Senior Sgt. Mark Todd, a veteran police officer, rounded another corner of the building, found Major Hasan fumbling with his weapon and shot him.

How the authorities came to issue the original version of the story, which made Sergeant Munley a national hero for several days and obscured Sergeant Todd’s role, remains unclear. (Military officials also said for several hours after the shooting that Major Hasan had been killed, although he had survived.)

Six days after the deadly shooting rampage at a center where soldiers were preparing for deployment, the military has yet to put out a full account of what happened.

At a news conference outside the post on Wednesday, Lt. Col. John Rossi refused to take questions about who shot Major Hasan or why the initial reports said it had been Sergeant Munley rather than Sergeant Todd.

“These questions are specific to the investigation and I am not going to address that,” Colonel Rossi said.

Public affairs officials also declined to make Chuck Medley, the director of emergency services at the post, available for questions. It was Mr. Medley, who oversees the post’s civilian police and fire departments, who gave the first account of how Sergeant Munley stopped the gunman.

On Tuesday night, Lt. Col. Lee Packnett, of the Army’s Office of the Chief of Public Affairs at the Pentagon, declined to say whether it was Sergeant Todd who had shot Major Hasan. “It could have been, but the final outcome will be determined by the results of the ballistics tests.”

In an interview on Wednesday, Sergeant Todd’s wife, Lisa, said he had asked the Army to protect his identity in the immediate aftermath of the shootings. Her husband did not consider himself to be the real hero of the day, she said. “They were in this together,” she said.

Neither Sergeant Todd nor Sergeant Munley were made available by the military for this article, but on Wednesday on the “Oprah Winfrey Show,” they offered their first public comments on the shooting. They did not give a detailed chronology of what happened, nor did they say who had fired and hit the suspect.

Both are members of the civilian police force at Fort Hood. Sergeant Todd said on the talk show that he and Sergeant Munley had arrived at the Soldier Readiness Processing Center in separate squad vehicles about the same time.

“I just relied back on my training,” Sergeant Todd said. “We’re trained to shoot until there is no longer a threat. And once he was laying down on his back, his weapon just fell into his hand and I’m, like, ‘O.K., now’s the time to rush him and secure him.’ ”

Major Hasan then turned his back on her and began to shove another magazine into his pistol. He did not appear wounded, the witness said. A few seconds later, Sergeant Todd came around another corner of the same building. He raised his weapon and fired several times at Major Hasan, who pitched over backward and stopped moving.

“He shot her, turned away from her and was reloading, when he was shot,” said the witness, who was nearby.

On the Winfrey show, Sergeant Munley, 35, said the incident was confusing and chaotic. “There were many people outside pointing to where this individual was apparently located,” she said. “When I got out of my vehicle and ran up the hill, that’s when it started getting bad and we started encountering fire.”

Sergeant Todd, 42, is a native of California who spent most of his adult life as a military police officer in the Army. He left the military police after 25 years to join the civilian force at Fort Hood. Like most members of the military, he has moved around a lot, serving at four bases in the United States and two in Germany.

Ms. Todd said her husband did not seem upset in the wake of shooting Major Hasan.

I think it speaks volumes to his character, not only in his actions that day, but in his inaction after that day, in not seeking the limelight and the pats on the back. A true hero. 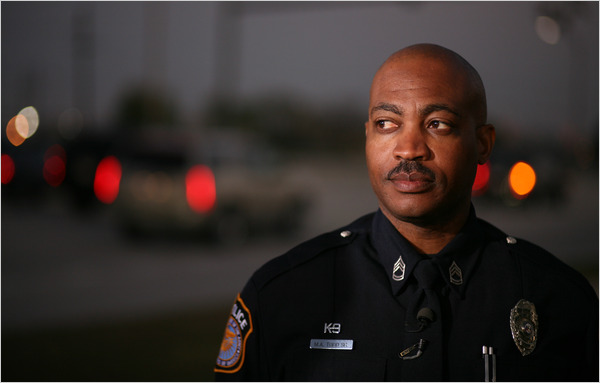 Soldiers present were also heroes, of course, with reports of shielding others from the danger as well as treating the wounded.

The petite police officer, who stands 5 feet 2 inches tall, said she was hit by three bullets. One struck the knuckle of her right hand; one passed through her right knee, then hit her left leg; and one pierced the femoral artery in her left thigh.

“I knew from the amount of blood and the color of the blood that was coming out” of the thigh wound that it was gravely serious, Munley said, sitting in a wheelchair with a blanket spread over her legs.

The soldiers who ran to help her knew it, too; even as she urged them to get pressure on the wound, they were fashioning a tourniquet.

Bleeding stanched, Munley immediately entered what “Today” hosts Ann Curry and Meredith Viera — themselves working mothers — dubbed “Mommy Mode.” She located her cellphone and arranged for someone to pick up her 2-year-old daughter (an older daughter, age 12, presumably gets home from school on her own).

“So the balancing act of motherhood and being a police officer did not end, even at that moment, for you,” said Curry.

“Absolutely not,” Munley said, smiling slightly. “It never does.”

Having your femoral artery cut is a life-threatening matter, and thanks to the training of our soldiers and law enforcement and the quick-action decisions they made that day, we can be grateful that more lives were not lost last Thursday. 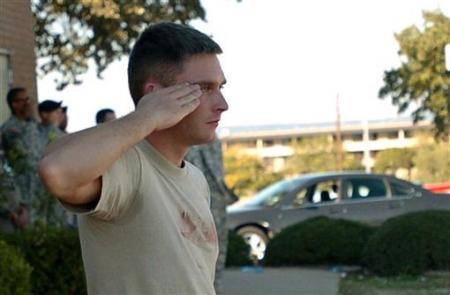