Standing in awe, in the presence of giants… 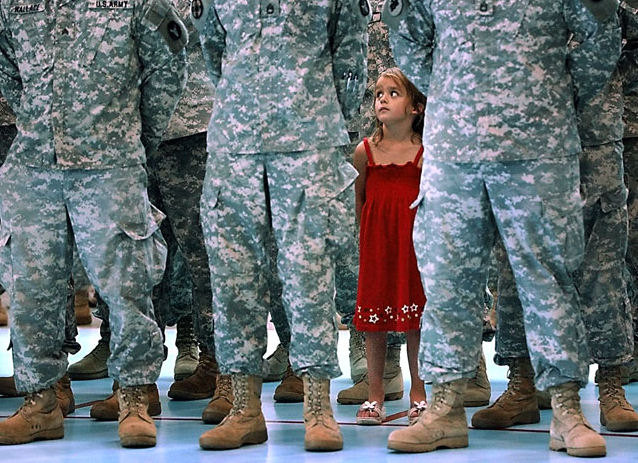 To all those who have served in our Armed Forces and to all those currently serving, a heartfelt 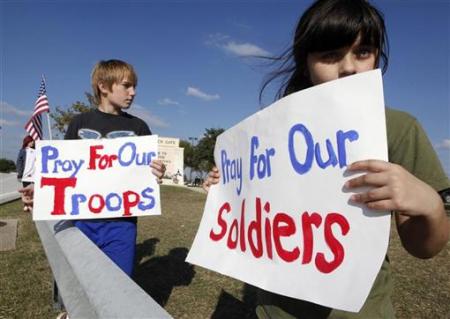 Say a prayer for our troops overseas!

God Bless ALL our TROOPS no matter where they are!

Right back at you, brown shoe.

A thank you seems such a small thing for all that has been done for us. Our Veterans have served this country, protected our allies and given freedom to countless people around the world. All, at great personal cost, sacrifice and their own freedoms sacrificed when signing on.

You are all to be honored and I hope know how proud and appreciative we are of our Veterans and the outstanding men and women presently serving! My very humble thanks to everyone of you!

Neptunus Lex posted a wonderful essay in honor of our Veterans:

At 1100 on the 11th day of the 11th month, the guns finally fell silent, but not before 10 million young men fell, never to rise again, with another 20 million maimed, and nearly 8 million missing, forever. The world got its first look at modern, industrial warfare on a massive scale and turned away revolted. Promised those left behind that this would be it, the war to end all wars.

It was a promise that went sadly unfulfilled.

On Memorial Day we lay flowers on the graves of those that fell. Today we give humble thanks to those that served, and returned again with honor to take up the plow, hammer or pen. Or to those who fell back into the ranks vowing to keep the sword bright and sharp for the next time, grimly aware that there will always be a next time, that only the dead have seen the last of war. Having seen for themselves the real nature of man, knowing as they do that weakness is provocative to savagery and that the surest path to peace is to be prepared for war.

Some march in parades, and see the battle pennants streaming from the colors. For them these are not mere gaudy flashes, for they have a memory of the time before they were in place, remember the streamers fresh and new, remember what it cost in human terms to tie them to the flagstaff.

Others will gather in taverns and VFW halls, hoist refreshments in memory of their youth, offer toasts to those forever young, and wonder how they will ever be able to explain any of it to anyone who wasn’t there, while knowing that for those who were, no explanation will ever be necessary.

Some will wake up in the middle of the night seized with nightmares or private guilt, some few will try to self-medicate, fall down a deep tunnel and end up wandering the streets muttering dark and unintelligible dirges of innocence lost and the human connections that cannot be restored once one has seen the whole world turn violently mad.

Military service is hard, even in peace time. People are asked to surrender a portion of their freedoms to better ensure the freedoms of the rest of us. Discipline is enforced; great exertions are called for, there are separations and privations. They are taught to run towards the sound of the guns, to stand in the hatch and fight the fire, to shove the throttles up and fly into the maelstrom. In short, they are conditioned to willingly go towards things from which every fiber screams to flee. They are taught, and most of them eventually come to believe, that there is something more important than themselves. That some things really might worth dying for, whether those be noble principles, those they left at home, or those on their left and right.

These are hard teachings, but they have the example of heroes to testify to the truth of them.

In this land we are graced with a vibrant political culture, but it was Washington’s guns and musketeers who gave it to us. We enjoy the remote fastness of our island home, but it was Decatur, Farragut and Porter who scoured the seas to defend our ocean ramparts. We have human freedom and increasing dignity here at home, but not before three million boys in blue and butternut contended the terms of that freedom. We have liberal democracies here and abroad, but not before millions more marched forth asking for nothing but a patch of earth to be buried in, should it come to that.

There are many blessings in this land, but although we tend to treat them as birthrights, transferable to our heirs in perpetuity, the reality is that all of them have been fought over. Perhaps the greatest blessing of all is that in each generation there have been those who answered their country’s call when it came and said, “I’ll go. I’ll do it. Pick me.”

They are the veterans, and this is our day to thank them.

Thank you for your service

lol… haven’t heard that in a while… you can add Trusty Shellback to that as well. My niece is thinking about entering the Navy when she graduates high school. I informed her that being stationed with a squadron in the Navy is much better than being assigned to a ship. Less deployments and you don’t have to live on the ship. My squadron was assigned to the USS Ranger and I did two West Pacs with her. Being on the flight deck 12 hours was no fun but now I find that I kind of miss it. I would love to do one more West Pac – minus working the flight deck.

You guys may think that Liberals do not support our troops but you are wrong. I loved serving in the Navy and I certainly support all that put on the uniform. I didn’t join for patriotic reasons. I needed money for college. But once I was there and had the opportunity to travel the globe, you really get an understanding of what a great country we live in. I was proud to wear the uniform. Those years changed my life. I’ve visited over 20 countries, lived in every region of the United States and even befriended a racist from Louisiana who changed his perspective after having to bunk with me for two years and I actually learned to like him as well.

Yes, there were the bar fights in Olongapo (Philippines) and Falon, Nevada. Not to mention the parties in Tijuana. But there was the aviation electronics training, the excitement of watching Tomcats take off on the flight deck and the opportunity it gave me to grow into a man. I graduated from college without owing a penny in student loans. I recall moving to Philadelphia and meeting a guy at a coffee shop who offered me job on the basis that I was a military man.

So despite my political rants, I’m grateful for the time I served and what it has meant for my life. I may not wave big flags or sport a lapel pin flag, but I’d die for my country. In Chicago there is a large black population that talks about going back to the motherland and forming a country for black people. You’ll never see me down with something like that. You don’t know how much of an American you are until you leave these shores. I’m an American and proud of it… That proclamation may surprise some of you but indeed this… very Liberal, very much President Obama supporter is also a proud Veteran and 100% American.

This is the stuff of which Americans are made. A genuine hero and a man I’m proud to say I knew.

Thanks for serving James. A very good friend of mine is ex-navy, liberal, Obama supporter. I know for a fact that he and I would fight side by side to defend this country. I don’t believe all liberals are anti-American, but I would be lying if I said I didn’t believe there were a lot that were.

In the Air Force, I flew West Pac missions for 4 years. Loved every minute of it and never had to stand on flight deck. I cried when the closed down the Philippines. 25 cent San Miguels, $5 for Steak and Prawns. Man I loved that place.

Happy Veterans days to all my brothers and sisters, conservative, liberal and everyone in between.

@james (US Navy – VS-38 Red Griffins):
Thank you for your service, James, and putting your life on the line for this great country. Glad you were able to befriend your racist bunkmate, too!