Do we dare miss him yet? 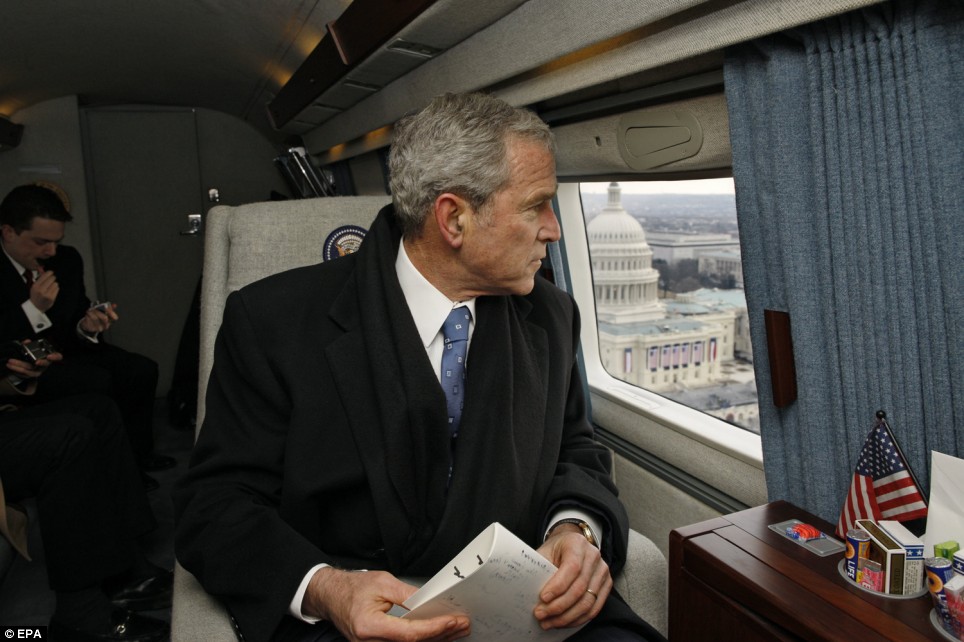 “Every day in the White House was a joyous day for me,” the 43rd president said. “I miss being commander and chief of our military the most. You know you live in an amazing country when we have servicemen that continually volunteer to serve their country in the face of danger. I believe we have an obligation to give our troops all the support they need to accomplish their missions.”

The former president said he still has faith that conflicts in the Middle East can eventually be resolved.

“There are individuals out there that kill to achieve their ideology,” he said. “In the United States, our ideology is our assurance to freedom. That’s what makes us great and unique.”

Bush said Japan was once a sworn enemy of the United States but is now an ally because of its desire to become a free nation.

“Something happened over the past 60 years that transformed our enemy (Japan) to an ally,” he said.

“It was their desire to become free. That same democratic core can happen in the Middle East if we don’t lose sight that people everywhere should have the right to freedom.”

Each president chooses a portrait of their favorite past president to hang in the oval office and for Bush, that was Abraham Lincoln.

“I believe Abraham Lincoln was the greatest president of all time,” Bush said.

“He believed that all men were created equal under God even during times of civil war. He believed in the spirit of freedom. I believe in God Almighty and that everyone desires to be free and want peace.”

A Methodist by faith, Bush said every American has the right to worship God in any way he or she wants.

“The President of the United States should never promote a particular religion,” he said.

“That’s just another thing that makes us such a great nation, being able to worship God as we choose.”

Bush said he was proud to represent the United States during his eight-year tenure.

“The institution of president is so much more important than the person,” he said. “I tried to bring honor to the office for eight years.”

“He made everyone feel at ease,” Waldrep said. “I hope everyone walked away from here with a little skip in their step. It was non-political and made me proud to be an American.”

No divisive political rhetoric; no America-bashing. Just an expression of faith, optimism, appreciation of the military, and love of country.

I started missing him, oh, at least 6 months before he left Office. Still do. Would vote for him again if I could. As I’ve said here before, in my heart, he will forever be ‘my’ President.

I missed him when it was announced that the prez-in-training had been elected. it wasn’t funny then, and it isn’t funny now! Bush, for all his faults looked out for our country, our service men and women and our allies. ‘Nuff said.

Bush is wrong about one thing – there will NEVER be peace in the Middle East – it is written.

If only Bush could have been a fiscal Conservative.

No one ever doubted that Bush had America’s interests first and foremost or that he was a true American.

YoMama has announced his newfound support for… the Taliban. He has said he thinks it could be a good idea to give vast swaths of Afghanistan to the Taliban.

I do not think he discussed this with India. I am pretty sure he doesn’t discuss much of anything with our allies. He is too busy bending over to our enemies.

That was great reading! Made me nostolgic for the past. It’s kind of boring having a President who can formulate independent thoughts and speak in a way that makes sense. I miss the Dim Son, talk about Presidential Comic Relief. You never knew what he was going to do or say next but you did know that it was going go be ebarrassing to the country, to himself and all of man kind.

What a bunch of yokels. You miss Georgie. What clods.

@Lucullus: “…kinda boring having a president who can formulate independent thoughts and speak in a way that wakes sense.” What the hell have you been smokin’? bo cant form a thought and intelligently express it. he can only fake it if he has a teleprompter near. Bush wasn’t the best President, but history will show he was much better that bo will ever be.

I will agree with the others here, he had his faults, but he was one of the best presidents since Regan. Even in retirement he is still honorable and doesn’t feel the need to criticize or demean others. Compare Jimmy Carter to Bush and it shows why one is a true American and the other is a card board cut out of what not to do as president and beyond.

Every morning Bo wakes up and hopes the teleprompter has been programed with the correct material, otherwise he will look like an incompetent fool.

Sorry Skookum, Bo doesn’t need a teleprompter to look like an incompetent fool! He just has to show his face in public.

A good leader does not conduct the affairs of his responsibilities so that everyone LOVES him..as Abraham Lincoln said….
I desire so to conduct the affairs of this administration that if at the end… I have lost every
other friend on earth, I shall at least have one friend left, and that friend shall be down
inside of me.

I liked George Bush. I didn’t always agree with him but I believe he will go down in history in a favorable light. I was always proud of him, never ashamed. He did what he thought was best for America, not just for himself.

Amen. If only Bush had been a fiscal conservative.

Anybody else miss having an adult in the White House?

@Lucullus: Learn how to spell and formulate a sentence before you bash another.

Lucullus. Ah yes, the people who claim to be tolerant, intellectually superior to others, and supporters of the common man shows what lies those are.
It comes here to spew unhinged hatred, display raging elitism, a gross lack of spelling skills, and major intellectual inferiority.

You laugh at how Bush made speaking errors, well he often didn’t use a teleprompter. Your so-called gifted speaker obama can barely walk and chew gum without his. I will enjoy watching you leftist lemmings jump off the cliff in 2010.

Sometimes you need to be careful what you wish for you just might get it. One term wonder O will have history look at him very harshly.