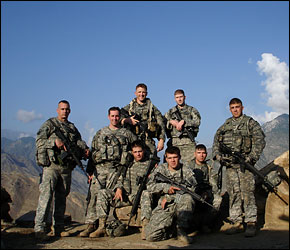 Above, Brostrom (second from left) stands with men from his unit at their base.
(Photo courtesy of the Brostrom family)
“It is almost a lost cause up in Nurestan. There needs to be a lot more than just a platoon there if you want to make a big difference.”
– 1st Lt. Jonathan Brostrom, a few weeks before being killed at Wanat, July 13, 2008.

Giving back as much as it received, 8 U.S. soldiers and 2 Afghan security forces (AP said as many as 7, but that figure now appears inaccurate) were killed Saturday in a brazen attack by 200-300 fighters, reminiscent of a similar raid in July of 2008. Developing:

KABUL, Oct. 4 — Firing rockets and rifles, Taliban militiamen attacked American and Afghan military outposts in a daylong siege on Saturday that killed eight U.S. soldiers and two Afghan security forces in one of the deadliest battles in months, according to U.S. and Afghan officials.

The fighting began early Saturday morning and raged throughout the day in a remote region of eastern Afghanistan in Nuristan province, which borders Pakistan. Staging their attack from steep mountainsides that overlook the outposts in the valley below, on a morning when weather made visibility poor, the Taliban fighters attacked the small American and Afghan bases using rifles, machine guns, grenades and rockets, according to U.S. military officials. 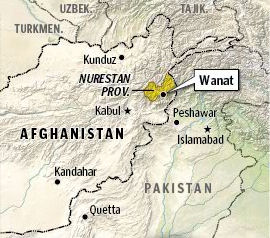 The Nuristan province attack — in its severity and location — bore a striking resemblance to a deadly battle in July 2008 in the tiny village of Wanat, in the same region, which left nine U.S. soldiers dead and 27 wounded after several hours of fighting. That battle prompted three investigations and was cited by many as an example of what was wrong with the American military approach to fighting the insurgency. The Wanat attack contributed to the change in strategy to move soldiers from remote areas where they didn’t have the forces to defeat the insurgents and move them to safer, more populated areas.

Badar, the provincial governor, said he was unaware of American plans to abandon their outpost in the area. He said that his province has a shortage of Afghan soldiers and an incompetent police force. The province is at risk of falling to the Taliban if the Americans pull out, he said.

“I request that they stay. If they leave, it will be very dangerous for Nuristan,” he said.

Perhaps more reinforcement is in order? Or not?

Thomas Ricks has posted on Frontline’s series, and that they posted an unaired Aug 1st interview with General McChrystal.

Sounds a little like the Taliban would like to pull off an Afghan Tet. Rack up some bad headlines, drive down the poll numbers and panic Congress while the president dithers. You’ll recall that in the original Tet, the Viet Cong and North Vietnam won a Pyrrhic political victory. Though decimated, severely compromed as a fighting force going forward and having failed to hold any ground, they managed to turn American public and political opinion. And won.

Certainly, our enemies are well aware of how much influence our “if it bleeds it leads” media has on American public opinion and political deliberations. It only embolden’s them further, to press on until we reach our tipping point of retreat and defeat.

And all Obama is doing about it is a 25 minute photo op with Gen. McChrystal.

And even that is too much time…

The problem with the “chain of command” is that it moves laterally through the leftists in the administration.

AF-PAK Insurgents Can Be Eliminated…

See the following posts: The Terrorists’ Tet and …

@John ryan: And McChrystal DID go through the chain of command John Ryan. He prepared his assesment and sent it up that chain where it now sits on Obama’s desk without any decision despite the urgency.

Apparently, health care was too much of a crisis for anyone to wait long enough to read the bill, but our boys dying in Afghanistan is not?

P.S. There is nothing to stop Obama from reaching out to McChrystal, HIS handpicked general. He doesn’t need to go through the chain of command to communicate with him.

So why do you keep dropping the same STUPID comment here?

Pandering for the 2016 Olympics is a lot more important then the lives of our military to that pimp president the “useful idiots” saddled us with. I wonder how many people are missing G. W. Bush today? I know our military is!

It must be terrible to serve in actual combat knowing your president is anti-military. I hope Sarah Palin or the Republicans will offer them their support as much as possible.

As long as McCain is alive, Sarah Palin has no chance of ever becaming President. He hates her and will do everything in his power to destroy her. In the mean time, because of politics and an unfit President , our brave men and women of our Armed Forces are being killed. My G-D Bless them and let us keep their families in our prayers.

There seems to me that there is more than a bit of “Looking for a Tet ’68” going on in the more recent Afghanistan coverage. I would like to insert a bit of perspective based on my own personal infantry experiences.

Just as there are two basic plays in basketball, drive to the basket or jump shoot, there are two basic plays in the infantry. The first is the classic “Find ’em, fix ’em and finish ’em” scenario. The second is its corollary, “Let them find you, fix ’em and finish ’em”. Effective infantrymen have to develop skills to deal with and execute both. Some days, you’re the cat looking for a mouse, and some days, you’re the cheese in the mousetrap.

The “Find ’em” scenario is often referred to as a reconnaissance in force, if the target is yet to be located, or an assault, if their location has been determined. One of the difficulties with this approach in a guerilla war is that the enemy can chose fight or flight.

The “Let them” scenario involves finding and occupying a location that may or has significant import to the enemy. The underlying logic is to draw the enemy into a battle, so inserting too large a force would probably be counterproductive.

It seems to me, based on the very limited information available at this point, that the two recent, costly battles were of this latter type. While our casualties are certainly both tragic and unwanted, this is how infantry work sometimes needs to be done. It would be a disservice to our fallen to turn these engagements into reasons to abandon their mission.

If we pull out of a place like Nuristan we can be certain that every single supporter we ever had in the province will be executed by the Taliban, and probably their family members as well. Then we wonder why we have so little support.

Ask yourself, if you were the head of an Afghan family, would you stake your family’s life on the staying power of Barrack Obama? By now I don’t doubt the word is out that he barely talks to his US commander and ignores requests for reinforcements.

I wonder if Obama is deliberately undermining the war effort to give himself an excuse to pull out.

God Bless our troops and our allies. And may the country arise and demand better leadership by the President.

@Tom N – As a family member of two combat serving military members, I can tell you it’s a nerve wracking time for all of us. You pray every minute of every day. Our soldiers do their jobs with their heads held high, regardless of the CiC and his efforts to undermine them.

I am hoping against hope here that McChrystal does not resign his post because I don’t think he’d be the last General to do so which would leave us in an incredibly bad position. However, our present Generals appear to have learned from the past and will not allow themselves to be made political scapegoats (which is why I think his report was leaked to begin with).

May God bless and keep our heroes close to Him, watch over their families and hold them in His arms. Let us never forget them.

I think portraying this as Tet is an inaccurate example, they need to go back in history and look at Dien Bien Phu. The French underestimated their enemy and let themselves get surrounded and over whelmed. The Taliban know exactly how many men are at each base camp and out post and will start to use larger forces to overwhelm them with men and firepower. How we react to this will set the tone of the war for the coming years. If we don’t start going on the offensive instead of sitting and waiting the Taliban is soon going to start controlling more than just the outlying areas of Afghanistan.

Dare I open myself to a b***h slapping by making a comment about how heroic and great these guys are over there fighting islamofacism. The last time I said anything like that I got such a drubbing by some old biddy cat lover.

They are exceptional people Davey…the best of all of us. We have to be worthy of their sacrifices.

Second, you will never have to worry about being criticized here for praising the heroic work of our men and women in uniform.

Third, there may be cat people here but they’re not likely to give you a hard time.

I applaud the gallantry of our forces. I doubt the enemy will launch a major offensive like Tet, as it plays to our strengths and to their weakness. They may continue with periodic large incursions, but that does not seem like a smart play because they end up taking huge casualties.

0
Reply
Flopping Aces » Blog Archive » The People are the Prize

[…] reports, such as the recent news coverage of “Wanat II” that left 8 U.S. soldiers dead, can affect public opinion and Taliban morale, creating an Afghan Tet. Much of the war is about the […]

[…] four days after two combat outposts were overrun, leaving 8 U.S. and 4 Afghan soldiers dead, the Taliban is claiming that it has raised a flag over […]

[…] Report: Obama Surrenders In Afghanistan and Afghanistan: Do We Win Or Do We Lose Flopping Aces: 8 U.S. Soldiers Killed in Fiercest Battle Since Wanat Are You Freaking Stupid?: General McChrystal given a stern talking to for daring to point out the […]

And of course, The Bee nails it: https://babylonbee.com/news...