“You can play a great game and still not win,”

“The city of Chicago, having obtained the least number of votes, will not participate in the next round.”
–IOC President Jacques Rogge 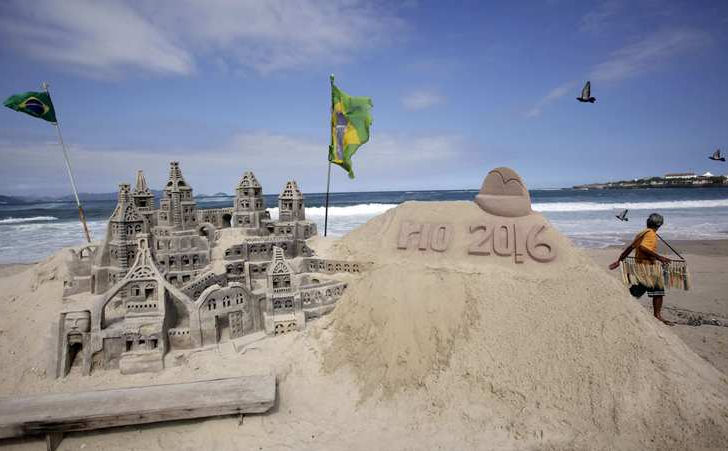 A sand sculpture in Brazil supports the candidacy of Rio de Janeiro for the 2016 Games, as opposed to the competing cities of Chicago, Madrid and Tokyo.
Natacha Pisarenko-AP

Silva called the win a “sacred day” as he was interviewed in Portuguese by Brazilian reporters in Copenhagen.

“I confess to you if I die right now my life would have been worth it,” Silva said. “No one can now doubt the strength of Brazil’s economy, it’s social greatness, and our ability to present a plan.”

He said Brazil’s passion, heart and soul helped Rio win the Olympics against Madrid, Chicago and Tokyo. The Brazilian city had failed in attempts in 1936, 2004 and 2012.

“This is a day to commemorate because Brazil has left its status of a second-class nation,” Silva said. “Today we’re getting the respect that Brazil has been deserving.”

Kanye took time out of his busy schedule to kick over the Brazilian sand castle, by interrupting with the following:

“Hey, hey Rio, I’m really happy for you, I’mma let you finish, but I just want to say Chicago had one of the best bids of all time. OF ALL TIME.”

Brazil is relying on a strong economy to stand behind its $14.4 billion budget for the games — the largest among all bidding cities.

Chicagoans were stunned at the humiliating rebuke (check the update); however, they, along with the U.S., dodged a bullet:

The common rejoinder to spiraling costs is that the Olympics make money for host cities. But the record is somewhat spottier than boosters admit. Athens and Beijing lost billions. Montreal, which hosted the games in 1976, took 30 years to pay off its loans. Los Angeles and Seoul made a tidy profit. Atlanta and Sydney broke even. It also depends on how you count: Is building a stadium factored into the cost? How about improving the subway? Expanding the housing stock? All this can leave a city with new and gleaming infrastructure — or a bunch of costly new houses no one wants to buy and stadiums no one wants to use.

Also read this from WaPo.

Meanwhile, President Obama took the bullet well for the presidency, with sportsmanlike aplomb:

“You can play a great game and still not win,” Obama said at the White House, shortly after returning from Copenhagen where his in-person plea did not put Chicago over the top. “Although I wish that we had come back with better news from Copenhagen, I could not be prouder.”

Obama expressed no regret at putting so much on the line for the failed effort.

“I have no doubt that it was the strongest bid possible and I’m proud that I was able to come in and help make that case in person,” the president said.

His chief spokesman, Robert Gibbs, told reporters that Obama got the bad news aboard Air Force One as he and his wife, Michelle, flew back to Washington from the Danish capital. He was watching TV alone in his quarters on the presidential jet.

Mrs. Obama had gone to Copenhagen ahead of her husband and had lobbied hard for the Summer Games to be brought to her hometown and his adopted hometown.

Chicago’s early exit from finalist balloting represented a personal setback for Obama and a painful defeat for Chicago, America’s most prominent Midwestern city. The president put his personal prestige and political capital at risk when he decided late in the competition to go to Copenhagen and make a personal appeal.

“Absolutely,” Gibbs replied, when asked whether Obama was glad he had made such a large commitment to lobbying for the Games. He said the president “would never shy away from traveling anywhere, talking to anyone about this country.”

Oh, yes….we all know how well our charm offensive president loves to talk about the country.

Many people had assumed Chicago would be a finalist. But International Olympic Committee members eliminated it only hours after Obama and his wife urged them to send the Summer Games there.

A 7 hour trip, In Copenhagen for less than 5 hours, 25 minute photo-op with General McChrystal, how much did this debacle cost American taxpayers? Not as much as winning the bid, would have cost us.

Obama is all out of magic smoke, the race card was all played out on Gates and the closet segregationist Carter, all that is left is the miserable failing US economy.

How bad is the economy, look here …

When a man has become a legend in his own mind. It is hard to accept rejection. I think Fearless Reader better learn how to deal with it. The water in the pool of the Narcissist has become muddy and I don’t think its going to clear up, people are beginning to see the real Obama and the real Obama ain’t real!

mmm mmm mmm No way Jose! You ain’t putting any of that duct tape over my mouth!

The whole country dodged the bullet. We would have ended up paying for this boondoggle #500 ,4376 cooked up by Daley, Obamas et al. This was a case of a crooked and corrupt Chicago meets a crooked and corrupt IOC. IOC decided the odds of getting more money for themselves lay with Rio rather than Chicago. The corruption is so big in
Chicago there is no more room for corruption on the IOC’s part.

Maybe the IOC were racist, neo-nazi, uneducated, teabagging people. I agree with the comment above. We, as taxpayers are already in debt. We were lucky they chose Rio. The U.S.A. is broke, and needs to stop corruption, not add to it.

One of my friends suggested they would have had a better shot sending Blago with a bag full of cash.

So the Obama illusions of grandeur and invisibility are gone; all lost with the Chicago bid for the 2016 Olympics. And now we see that in addition to the Obama’s exhibition of openly brazen deceptions, Obama is very much capable and qualified to exhibit his feebleness and lack of maturity. At this point, Obama is a very spent man, no longer qualified to influence anyone.

But who would have guessed that what many cautioned about Obama BEFORE his election would come to pass so quickly. Prior to November 2008 we said he was a suit, inexperienced and afro-centric, extreme and radical, socialist and far, far-left in all his criticisms of the country from which he garnered the privileges he so aptly criticized.

And now, very much despite the MSM apologists’ remarks, Obama, with his loss in Denmark, has fallen lower that one could have imaged; and not just in the U.S., but also abroad — where lately even the French have justly remarked that Obama is in fact very, very naive.

They got beaches with signs that say……………..Swimwear is optional. Nuff Said.
This Old Seadog would much rather visit a place like that, any day over Chicago.

A sand castle will tip the scales every time.

They got beaches with signs that say……………..Swimwear is optional. Nuff Said.
This Old Seadog would much rather visit a place like that, any day over Chicago.

[…] misadventure as a cheer against America. Some of that criticism has merit. But there are also honest reasons why all Americans should be happy Chicago lost the Olympic bid to play host: the U.S., dodged a bullet: The common rejoinder to […]

[…] AMERICAN POLITICS You can play a great game and still not win,” […]