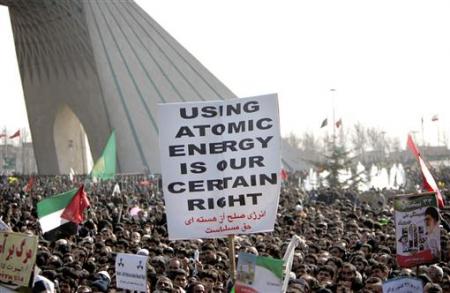 Iranians gather at Azadi (freedom) square to mark the 27th anniversary of Iran’s Islamic Revolution, as they carry a placard in support of Iran’s nuclear technology in Tehran February 11, 2006.
REUTERS/Raheb Homavandi

“I made it quite clear that when they argue that their nuclear facilities are genuinely for peaceful purposes the burden of proof is on their side,” he said.

Ahmadinejad said Friday his country has complied with requirements to inform the IAEA six months before a new enrichment facility becomes operational, and was giving 18 months notice.

Iran has agreed to allow the IAEA to inspect the new facility. At the news conference Tuesday, Ban was asked why he didn’t wait for the U.N. nuclear agency to issue its report, as Ahmadinejad said.

“To be transparent and credible, when you have such an intent to build facilities, they should have informed _ notified the IAEA long time before, not just before everything would be completed,” Ban replied.

“That’s what I’m raising. So there is a question of transparency. That is why the world leaders have expressed their deep concern and that is why I have also expressed my concern,” he said.

“I urged him that Iran as (a) historically rich and proud country should take the constructive role in the international community by making very transparent and directly involvement and engagement in negotiations to prove all the pending issues,” Ban said.

The secretary-general said he was following up his meeting with Ahmadinejad with a meeting later Tuesday with Iran’s Foreign Minister Manouchehr Mottaki.

“I sincerely hope that all these questions pertaining this new facility and other facilities _ all the pending issues concerning nuclear development programs of Iran should be resolved through dialogue in a transparent and objective manner with (the) international atomic agency involved,” he said.

*Groan*…why do we insist on being played like a violin?

Last week in wake of the disclosure of Iran’s “secret” “semi-industrial enrichment fuel facility”, Curt linked to this sentence in the WaPo:

President Barack Obama reiterated that Iran may have some right to nuclear energy _ provided it takes steps to prove its aspirations are peaceful.

“Prove its aspirations are peaceful”?!

Nima Gerami and James M. Acton at Foreign Policy spell it out:

the evidence that the new facility is part of a military program is compelling. According to unclassified U.S. government talking points, the clandestine facility near Qom is “intended to hold approximately 3,000 centrifuges” of an unknown type. In 2007, Gholamreza Aghazadeh, then head of the Atomic Energy Organization of Iran (AEOI), said that Iran’s target was to have 50,000 centrifuges at its Natanz enrichment facility. This number was needed to make “meaningful amounts of nuclear fuel” for one or two commercial-scale power plants to generate electricity.

Thus, by Iran’s own admission, the Qom facility is too small for civilian purposes. It is not, however, too small to produce meaningful amounts of highly enriched uranium for a nuclear weapons program.

U.S. intelligence also describes the facility as being “located in an underground tunnel complex on the grounds of an Islamic Revolutionary Guard Corps Base” unknown to all but the most senior AEOI officials. Links between a supposedly civilian facility and a military organization always worry IAEA inspectors, and they should worry us too. Iran’s core obligation to the Nuclear Non-Proliferation Treaty, which it says it fully upholds, is to ensure that all its nuclear activities are exclusively for peaceful purposes — building an underground nuclear facility on a military base certainly raises questions about Iranian intentions. Finally, because it was a clandestine plant, the Qom facility was clearly much more suited to military ends than the facility at Natanz, which is subject to IAEA monitoring.

They go on to point out the flaws in Ahmadinejad’s legal arguments.

What other clandestine facilities and operations do we know about? Begging the question of how much we don’t know about.

Western intelligence officials now want to determine whether there are even more secret enrichment sites. Defense Secretary Robert M. Gates dodged the question of whether there were additional sites during a television appearance over the weekend. Washington has said there may be more than a dozen sites involved in the nuclear program, though there have been no public indications as to what they are used for.

Graham Allison, the author of “Nuclear Terrorism” and a Harvard professor who focuses on proliferation, said he could not conceive of Iran’s building only one such site.

“How likely is it that the Qum facility is all there is? Zero. A prudent manager of a serious program would certainly have a number of sites,” he said.

After all, Mr. Allison said, the lesson Iran took away from Israel’s destruction of an Iraqi reactor more than 25 years ago is to spread facilities around the country.

Steve Schippert points out how this NYTimes article perpetuates the politically motivated 2007 NIE assessment fairy tale that Iran stopped its work on nuclear weapons designs in 2003.

Does anyone question Iran’s deceptiveness? It shouldn’t take a rocket scientist to realize and conclude that Iran’s nuclear technology ambitions are anything but for peaceful purposes. If it looks like a duck, quacks like a duck, walks like a duck…you don’t suppose that just maybe….by gosh, golly, geewhiz…maybe…that it’s a duck we’ve been looking at for the last 3 decades?

How much longer do we engage in this charade? This international farce?

The disclosure by Iran, prompted by the discovery that western intelligence has known about Qom for years, induced all the usual suspects to wag their fingers, launch “stern warnings”, “harsh” reprimands, and calls of facing consequences for the regime…but no credible threat of military action. Just Chocolate Chip Ice Cream Diplomacy.

And how did Tehran receive the soft-serve 31 flavors of verbal tickling? 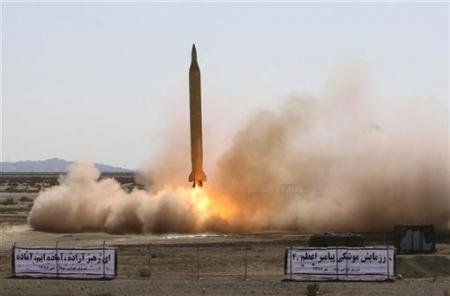 A Ghadr 1 class Shahab 3 long range missile is prepared for launch during a test from an unknown location in central Iran September 28, 2009. Iran test-fired the missile on Monday which defence analysts have said could hit Israel and U.S. bases in the Gulf, state media reported, a move that may irk world powers ahead of rare talks with Tehran this week.
REUTERS/Fars News/Ali Shayegan
0 0 votes
Article Rating
Wordsmith

Hey! Where can we get a sign that states, “Using Actomic Energy Is Our Certain Right”?

If it’s ok for the Iranian’s, why can’t American’s have Nuclear energy?