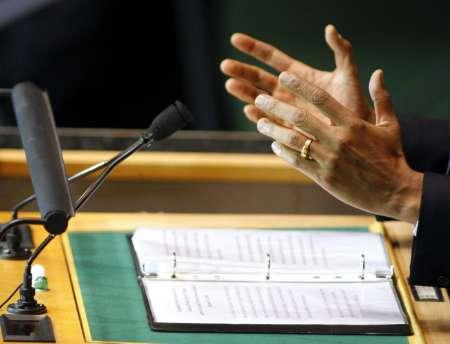 I took office at a time when many around the world had come to view America with skepticism and distrust. A part of this was due to misperceptions and misinformation about my country. Part of this was due to opposition to specific policies and a belief on, on certain critical issues, America had acted unilaterally without regard for the interests of others.

And this is has fed an almost reflexive anti-Americanism which, too often, has served as an excuse for collective inaction.

After all, it is easy to walk up to this podium and point fingers and stoke divisions. Nothing is easier than blaming others for our troubles and absolving ourselves of responsibility for our choices and our actions. Anybody can do that.

Like blaming the previous Administration for the state of affairs today and giving validity to misperceptions? Good grief!

He drew applause when he talked about how his administration had banned torture of terror suspects,

Applause from countries who engage in torture themselves? Countries like Iran who sponsor terrorism? And what did President Obama actually change?

and was engaging with the United Nations in a more complete way than the U.S. did during the Bush administration.

How exactly is he “more engaged”? It’s a myth that the Bush Administration engaged in “unilateralism” or was a serial offender of “international law”. What it did do was (quoting President Obama in his speech) lead:

“Those who used to chastise America for acting alone in the world cannot now stand by and wait for America to solve the world’s problems alone.”

As the French intellectual, Jean Francois-Revel might put it,

As far as America’s “unilateralism” is concerned, Revel asserts that the United States is forced to act alone because Europe has repeatedly failed to act in the cause of collective security.

But the new U.S. president also acknowledged that the United States and its world partners over time have failed to confront some of the world’s problems seriously.

“If we are honest with ourselves, we need to admit that we are not living up to that responsibility,” Obama said.

“We can be remembered as a generation that chose to drag the arguments of the 20th century into the 21st; that put off hard choices, refused to look ahead, and failed to keep pace because we defined ourselves by what we were against instead of what we were for. Or, we can be a generation that chooses to see the shoreline beyond the rough waters ahead; that comes together to serve the common interests of human beings, and finally gives meaning to the promise embedded in the name given to this institution: the United Nations.”

Kristen Silverberg writing for Shadow Government regarding a NYTimes piece on the U.N. General Assembly and the concept of Responsibility to Protect, endorsed unanimously by heads of state in 2005:

There was one line in the Times piece that, I think, bears correcting. The author says that the Bush administration “disliked the doctrine on the ground that it might tie American hands in foreign policy decisions.” In fact, the Bush administration endorsed R2P in 2005 and worked throughout the administration to see the principle put into practice. Secretary Rice, for example, cited R2P in calling on the Security Council to act in Darfur, and has many times cited her disappointment that we were not more successful in ensuring effective R2P action. We worked with other Security Council members to reaffirm R2P in U.N. Security Council resolution 1674, and as an assistant secretary of state, I endorsed the concept publicly many times.

I see this as another slam at the Bush Administration:

Democracy cannot be imposed on any nation from the outside. Each society must search for its own path, and no path is perfect. Each country will pursue a path rooted in the culture of its people and in its past traditions, and I admit that America has, too often, been selective in its promotion of democracy.

But that does not weaken our commitment. It only reinforces it. There are basic principles that are universal. There are certain truths which are self-evident, and the United States of America will never waiver in our efforts to stand up for the right of people everywhere to determine their own destiny.

There is a certain belief that the Bush Administration was trying to impose western-style democracy. But I don’t know of a single speech where President Bush made the case for creating a democracy that would look like ours.

U.S. President Barack Obama passes by a battered United Nations flag that flew over the bombed Canal Hotel in Iraq at the United Nations Headquarters in New York September 23, 2009. The flag was retrieved after the 2003 bombing of the building that served as the U.N. headquarters in Baghdad. REUTERS/Kevin Lamarque (UNITED STATES POLITICS IMAGES OF THE DAY)
0 0 votes
Article Rating
Wordsmith