Photo of the Day- “Oba Mao”

“Hey, Obama has just nationalized nothing more and nothing less than General Motors. Comrade Obama! Fidel, careful or we are going to end up to his right,”
– Venezuelan “president” Hugo Chavez 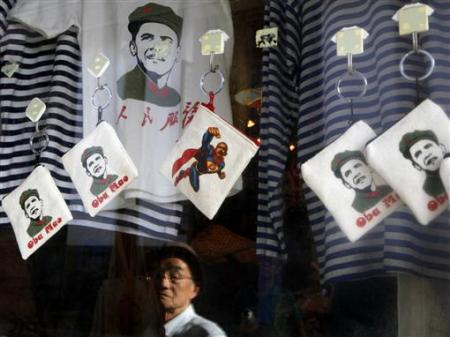 A tourist is reflected in the window of a shop displaying shirts and pouches bearing an image President Barack Obama’s face imprinted over that of China’s late leader Mao Zedong, in the popular tourist area of Houhai in central Beijing September 21, 2009. The shop has sold thousands of products bearing the “Oba Mao” design since stocks arrived just over a month ago, the shop owner said.
REUTERS/David Gray

No, I’m not saying our president is a communist….I’m just sayin’….*snicker*