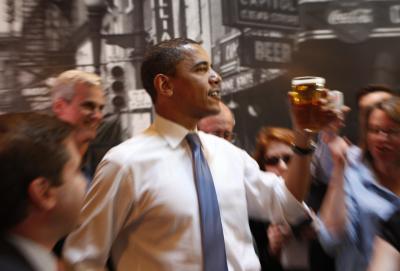 Well, well, well….today’s the day we head over at the White House, where everybody knows their names:

President Obama will welcome a well-known scholar and the police officer who arrested him to the White House on Thursday, in an effort to put to an end the racially charged controversy caused by the arrest near Harvard University earlier this month.

Obama, Harvard professor Henry Louis Gates Jr. and Sgt. James Crowley of the Cambridge, Mass., police are scheduled to gather over beers at a picnic table outside the Oval Office, joined by their families. The White House hopes the meeting will transform a public relations misstep for the nation’s first African American president into a “teachable moment” for improving the nation’s race relations.

Obama invited the two men to the White House on Friday, the same day he publicly expressed regret for saying July 22 at a nationally televised news conference that Cambridge police had “acted stupidly” by arresting Gates at his home. The remark ignited a backlash from conservative commentators and law enforcement officials, who accused Obama of speaking rashly and being anti-police.

That controversy caught the White House by surprise, and initially the president, a friend of Gates’s, stuck by his words. But as objections continued to build, Obama discussed it briefly with friends while at his Chicago home on Thursday, a White House official said. Later, he also discussed the issue with his wife — who was said to be as outraged by the arrest as he was — before deciding to step back from his original stand. Obama told reporters that both Crowley and Gates, who reportedly berated the officer, overreacted.

While Obama has recalibrated his original statement, several civil rights activists say his instincts were nonetheless correct. “Unfortunately his comments were misunderstood or less than clear,” said John Payton, president of the NAACP Legal Defense and Educational Fund. “But I have not heard anyone who disagrees with the following statement: What happened in Skip Gates’s house should not have happened. It’s his home.”

The informal meeting, where White House officials said Obama will drink a Bud Light, Crowley a Blue Moon and Gates a Red Stripe, will not attempt to address larger racial issues in more than a symbolic way.

“I hope what is essentially a photo op will trigger a broader policy response,” said Wade Henderson, executive director of the Leadership Council on Civil Rights. “And it’s Congress’s role to take that on.”

I heard Gates Jr. still thinks he is owed an apology. Just him?

Here’s a thought: Get the three of these men punch drunk….then let’s see what really comes out of them. That would make for an “honest” conversation.

What do you think/predict should happen?