As yet more proof that Andree Mcleod not only has no respect for Alaskan law, nor the taxpayers wallets, this loser of human has now filed her sixth attempt to throw mud at Sarah to see if she can get anything to stick. 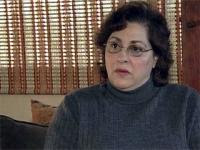 To say hell hath no fury may be an understatement when it comes to this one… You might also recall Ms. Mcleod (photo to left) was also the same wacko that appointed herself the state government employees fashion facist… complaining there was just “too much cleavage” being shown by the staffers.

Just a week before she walks out of the Alaskan gubernatorial offices, Sarah, on July 20th, 4:40pm Alaskan time, tweeted:

AKGovSarahPalin: In violation of Ethics Act more allegations were filed today by serial complainer;gave to press be4 we could respond;ridiculous, wasteful…

Didn’t take me long when I saw that yesterday to figure out who best fit the profile of “serial complainer”. Conservatives4Palin was on top of it the same day, but it didn’t make a more national medium until it’s appearance today on Salon by, none other than Rachel D’Oro. She is, of course, the same reporter that’s feeding the BS to AP about the Chatman ethics complaint being a done deal as “guilty” in my Pt VI series.

The latest complaint alleges she abused her office by accepting a salary and using state staff while campaigning outside Alaska for the vice presidency. It’s the third complaint filed against the Republican since she announced July 3 that she was stepping down.

In her complaint, Andree McLeod said that two days before Palin was named John McCain’s running mate, she signed travel documents that stated “conclusion of state business.” A similar document soon after the election stated “return to duty status.”

McLeod said Palin’s signature on the documents demonstrated a “willingness to forgo her duties as governor” to travel on the national campaign. She added that she filed the complaint now only because she was waiting for a final document from the state in response to a public records request.

McLeod said that given that temporary absence, Palin should have turned over the governor’s responsibilities to Parnell as required by the state constitution.

“The reason this is so serious is because the transfer of power should have taken place but did not,” McLeod said Tuesday.

UPDATE: It seems that Ms. D’Oro, an Alaskan resident as well as an AP hack, continues to get her facts wrong. The newest Handee Andree complaint is clarified by Palin counsel, Thomas Van Flein, on Facebook.

FOR RELEASE: JULY 20, 2009
Another Ethics Complaint Filed Against the Governor

July 20, 2009, Anchorage, Alaska – Once again, an ethics complaint has been filed and publicly released in violation of state law. This is the sixth complaint filed by Ms. McLeod. In addition, she has filed a lawsuit against the Governor’s office and multiple public records act requests.

All of her prior complaints that have been ruled on have been dismissed.

The Ethics Act serves important state interests in ensuring ethical state government and was intended to prevent the various forms of corrupt misconduct that had plagued the Legislature in prior years and which resulted in the prosecution of legislators and others. It is unfortunate that the law has been abused and trivialized in the current manner.

Today’s complaint, filed just six days before the Governor leaves office, alleges that Governor Palin violated the Alaska Executive Branch Ethics Act by failing to submit complete gift disclosure forms in a timely manner, and obtained “free” services. The apparent primary goal of this complaint has been achieved, namely, an effort to keep the complainant’s name in the paper. We anticipate another dismissal of this complaint as with the complainant’s other complaints. This is the fourth ethics complaint filed against the Governor since the announcement of her resignation on July 3. In every case, the complainers violated the confidentiality provision of the Ethics Act in making their complaints public knowledge.

Mcleod evidently needs to move fast since Palin steps down on Sunday, so this sixth smear attempt comes only days after her fifth filing was thrown out the door almost upon arrival.

As is usual with our bizarre societal obsessions, one has to wonder if Mcleod isn’t out for her own last seconds of her 15 minutes of fame. For timed with her sixth filing of complaints was a Vanity Fair profile feature of Mcleod, calling her Sarah’s “worst nightmare”.

To McLeod, the fact that all the complaints have been dismissed is merely proof that the review board is in Palin’s pocket. “They’re appointed by the governor,” she says. “They’re not independent. I used to work for a board for the state. Boards like this that are made up of volunteers who are easily manipulated.”

As I pointed out in the Troopergate series, and again in the Alinsky Perfected II/III pieces, the three personnel board members are all appointees of Mcleod’s prior boss, Frank Murkowski. Vanity Fair’s Christopher Batement, apparently less informed on facts that dedicated to slipping sly little demeaning remarks about Palin in his feature on McLeod, let this truth go by with nary a clarification.

Batement did, however, follow it up with a quote from the AG’s office stating repeatedly to his questions that Palin’s not been found guilty of anything…. only to follow it up with his own personal observation: “In fact, he said it enough times that I started to wonder if he was trying to convince himself.”

… or perhaps he was trying to get it thru Bateman’s thick skull?

Work quick, Mcleod. Because your next attacks on the soon to be ex-governor will no longer be paid for by your neighbors, and will cost you dearly in a counter lawsuit. And I say it’s about time.