While the nation was busy with Sotomayor…. health care destruction advancing under cover of media darkness

As the Senate committee puts on it’s usual media dog and pony show for what will ultimately result in the confirmation of Sonia Sotomayor, other Senate members from the Health, Education, Labor and Pensions committee (HELP) slithered behind the scenes to bring the nation one step closer to Obama’s “remade” America with universal health care by passing a a $600 billion health-care reform bill called the the Affordable Health Choices Act.

“What was passed today is the foundation for meaningful reform,” said Sen. Patty Murray, Washington Democrat. “This bill says that health care is not a luxury, its a necessity. … It protects existing coverage when it’s good, improves it when it’s not, and guarantees care for the millions who have none.”

In case that name, Patty Murray, rings a bell, she’s the same Washington State Senator who stood up in front of students and praised the accomplishments of a fictional Osama Bin Laden, who she portrayed as traveling the world, building schools and tossing daisies. uh… nuff said.

But back to the prime bozos at hand… which brings me to Obama, happy as a clam on the heels of his lack luster pitch the eve before.

“Today, thanks to the unyielding passion and inspiration provided by Sen. Edward Kennedy, the … committee he chairs has produced a proposal that will finally lower health care costs, provide better care for patients, and ensure fair treatment of consumers by the insurance industry.”

BTW, on that pitch… don’t *even* bother me with another BS type post about Obama’s purported (or not) athlete prowess… or even if this is important in the scheme of things. I care not that he can’t throw a ball. But I am seriously chagrined that he drops the ball with every play.

The House version…. health care bill, not bad baseball… passed Tuesday, with a $1.5 trillion price tag. ho humm.. those words just roll of the tongue as the norm now, yes? Want to read the Speaker’s glowing BS statement? It’s the usual pol doublespeak that squares not an iota with truth, so forgive me if I waste no space on excepts.

Ultimately the bills will have to be reconciled prior to passage and enactment, but below is the precursor. We already know the figures lie, and the liars are still figuring on the low IQ of Joe and Josephine Q. Voter.

BTW, the GOP wanted to simplify the bill with pictures…. LOL So Aye Chi passed on the PDF link to the Arlo Gutherie’esque “twenty-seven 8 x 10 colored glossy pictures with the circles and arrows and a paragraph on the back of each” type flow chart. But in case you want to save your clicking finger as well as your eyes, here’s how “simplified” looks in a quick glance… … 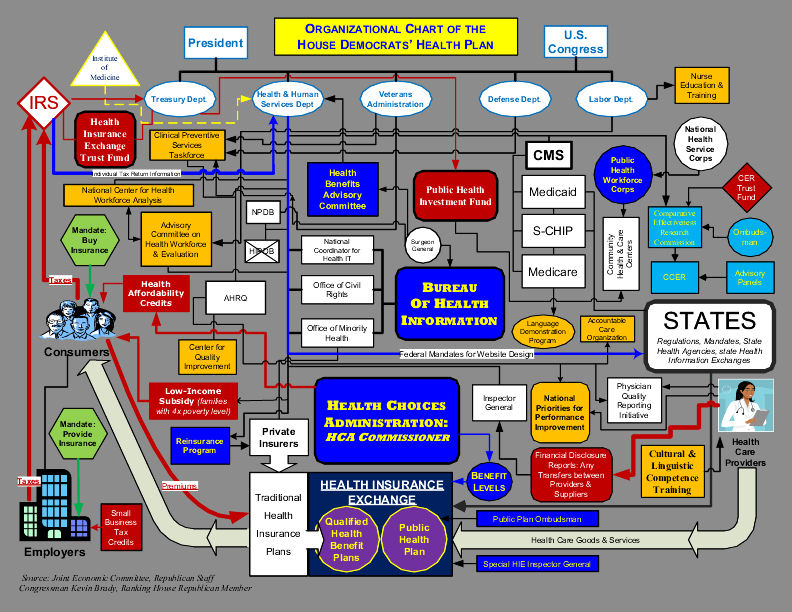 So without further adieu… and with a H/T to both Curt and Docstoc… da Senate’s proposal to destroy the US economic recovery and diminish our health care system, as seen by Reid and cronies…