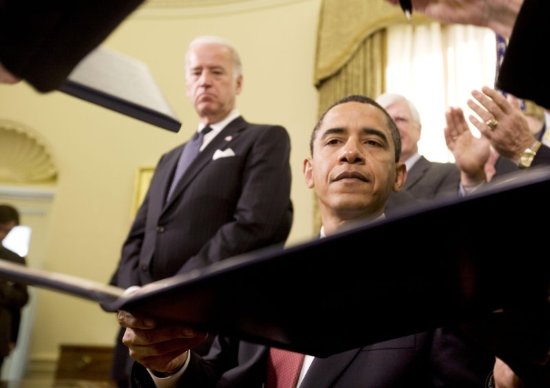 U.S. President Barack Obama while signing executive orders about the closing of the military prison at the U.S. military base in Guantanamo, Cuba, in the Oval Office on second official day at White House in Washington, January 22, 2009.
REUTERS/Larry Downing (UNITED STATES)

The Obama administration, fearing a battle with Congress that could stall plans to close the U.S. prison at Guantanamo Bay, is drafting an executive order that would reassert presidential authority to incarcerate terrorism suspects indefinitely, according to three senior government officials with knowledge of White House deliberations.

Such an order would embrace claims by former president George W. Bush that certain people can be detained without trial for long periods under the laws of war. Obama advisers are concerned that bypassing Congress could place the president on weaker footing before the courts and anger key supporters, the officials said.

President Obama should swallow his pride and just abandon his campaign promise, a position based upon partisan politics more than upon informed knowledge. It’s ok to admit a mistake; it’s ok to say “I was wrong before…” then go on to explain to the American public and his political constituents how his position has evolved and why Gitmo should remain open; or at the very least, why the January deadline just isn’t realistic. Not if it means compromising the safety of the United States.

[Wishful thinking] And then he should encourage all those partisans out there to apologize to the Bush Administration for all the hysteria and criticism and partisan distortions over the detention facilities at Guantanamo. [/Wishful thinking]

Three months into the Justice Department’s reviews, several officials involved said they have found themselves agreeing with conclusions reached years earlier by the Bush administration: As many as 90 detainees cannot be charged or released.

President Obama is good with words. So let him convince the world that Gitmo is the most transparent and humanely run detention facility in the world (He can lie and claim credit that this happened on his watch- not the previous administration’s watch). Make them gush and fawn while he perpetuates Bush-era policies under the clever packaging of “hope” and “change”. After all, it worked with his Cairo speech. He can change the name “Gitmo” if he so desires. Call it ‘Al muntazah al-dini lilmujaheden al Muslimin,’ “The Religion Resort for Islamic Militants.”

So Gitmo can enjoy a fresh new image makeover under the golden age of Obama.

Instituting long-term detention through an executive order would leave Obama vulnerable to charges that he is willing to forsake the legislative branch of government, as his predecessor often did. Bush’s detention policies suffered successive defeats in the courts in part because they lacked congressional approval and tried to exclude judicial oversight.

“There is no statute prohibiting the president from doing this through executive order, and so far courts have not ruled in ways that would bar him from doing so,” said Matthew Waxman, who worked on detainee issues at the Defense Department during Bush’s first term. But Waxman, who waged a battle inside the Bush administration for more congressional cooperation, said that the “courts are more likely to defer to the president and legislative branch when they speak with one voice on these issues.”

Tawfiq bin Attash, who is accused of involvement in the bombing of the USS Cole in 2000 and who was held at a secret CIA prison, could be among those subject to long-term detention, according to one senior official.

Little information on bin Attash’s case has been made public, but officials who have reviewed his file said the Justice Department has concluded that none of the three witnesses against him can be brought to testify in court. One witness, who was jailed in Yemen, escaped several years ago. A second witness remains incarcerated, but the government of Yemen will not allow him to testify.

Administration officials believe that testimony from the only witness in U.S. custody, Abd al-Rahim al-Nashiri, may be inadmissible because he was subjected to harsh interrogation while in CIA custody.

“These issues haven’t morphed simply because the administration changed,” said Juan Zarate, who served as Bush’s deputy national security adviser for counterterrorism and is now at the Center for Strategic and International Studies in Washington.

“The challenge for the new administration is how to solve these legal questions of preventive detention in a way that is consistent with the Constitution, legitimate in the eyes of the world and doesn’t create security loopholes that cause Congress to worry,” Zarate said.