Sarah Palin: “We never need to fear that though we’re not a perfect nation, that we must apologize for being proud of ourselves.” 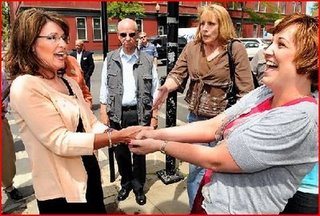 Gov. Sarah Palin recently visited Auburn, New York, to help celebrate the 50th anniversary of Alaska statehood. That city’s Founders Day event honored William Seward who played an important role in the purchase of Alaska while he served as secretary of state.

During her visit she visited different historical and not so historical sites and met the residents of Auburn: (h/t to Conservative 4 Palin)

Bistro One got a very last-minute reservation request Thursday. But this was one they wanted to make room for.

Former vice-presidential candidate and Alaska Gov. Sarah Palin participated in a breakfast event Friday morning at the Auburn restaurant. The event, which was attended by area supporters, kicked off a day of activities for the Republican governor at various local businesses, parks and organizations.

Her tour of the area precedes today’s first-ever Founders Day, which celebrates local history. During the Auburn festival, Palin will take part in a parade, speak at the city hall and attend a fundraiser luncheon at the Seward House.

One of about 40 in attendance at the breakfast was state Assemblyman Gary Finch. Finch said Palin gave a nonpolitical talk, and she expressed gratitude to the local community for inviting her.

Finch said that Palin, who brought her husband, Todd, daughter, Willow, her sister and nephew along, made sure to speak individually with each person at the event.

“She certainly conveyed to everyone that she is very glad to be here,” said Finch, who will also participate in Saturday’s festivities.

At 10:15 a.m., a black SUV took her to the Tubman House for an unannounced tour away from the media pool. Palin’s family was shown through Tubman’s Home for the Aged, and site manager Paul Carter pointed out a print of a guardian angel leading a child. Carter said it reminded him that Tubman was “the guardian angel of us all.”

“That’s beautiful,” Palin said. “That says it all.”

In the Tubman visitor center, after hearing about Tubman’s resilience as she fought slavery, Palin called over her nephew Karcher, who is autistic, and said, “This is something for you, anytime you go through something tough. Keep going.”

And the Women’s Rights National Historic Park and the National Women’s Hall of Fame:

Shortly before noon, Palin’s party was led to the National Women’s Hall of Fame by Executive Director Christine Moulton. Moulton pointed out a number of inductees (including Ruth Colvin, founder of Literacy Volunteers in Syracuse) who had made great contributions to society after raising a family.

“That’s very hopeful for a lot of young moms today, who have to put things on hold,” said Palin, whose 18-year-old daughter, Bristol, is raising a child.

At the Hall of Fame, Palin — wearing a Blue Star Mom pin and bracelet for her son Track serving in Iraq, and showing red toenails in open shoes — posed for pictures.

Moulton gave Palin flowers. Nozzolio gave Palin a DVD of Ken Burns’ series on Anthony and Stanton (“Not for Ourselves Alone”). Palin congratulated Seneca Falls Mayor Smith for being “a good mommy mayor” and “setting an example for young women who want to affect positive change.”

At one point, Palin said she shared with Susan B. Anthony a desire for the protection of women. “For me, that includes our youngest sisters, girls in the womb,” she said.

And one reaction from a resident needs to be repeated:

Adams and his daughter, Erin, got up at 5:30 a.m. to be in Auburn this morning. By 9 a.m., they were seated in folding chairs and talking with other Palin fans. John Adams likes Palin’s politics.

“She makes me think of Ronald Reagan,” John Adams said.

“For the first time since Reagan, I’ve found a candidate that … sounds like Reagan and that has some Reaganesque qualities,” said Adams, 56. “She’s not the speaker Reagan was, but she believes the same things Reagan believed and talk that way, and that inspires me.”

Later she led a parade through Auburn where 20,000 people showed up to cheer her on and gave a speech which definitely contained some red meat. As she reached the podium you can hear people yell “run Sarah run.” The video’s of the speech is below but a few spots of interest, at about the 2:20 mark in part 1:

We never need to fear that though we’re not a perfect nation, that we must apologize for being proud of ourselves.

Later in part 1 she honors a few Auburn son’s who gave the ultimate sacrifice fighting in Afghanistan and Iraq asking them to join her in “promising the gold star moms that our soldiers deaths are not in vain and we will continue to fight for our security, our democracy, our freedom.”

And she takes on those who criticized her for not taking the strings attached stimulus money from the federal government (part 4 below):

I recently turned down, or vetoed, stimulus dollars that were tied to implementing…some mandates from the federal government trying to take away more control of our local governments, and our families, and our businesses. In this case, implementing universal energy building codes that some claimed after I vetoed the money “oh, she’s just trying to make a political statement.” And, no, I’m actually trying to use some common sense here, and some may be uncomfortable with that, but it is the right thing to do.

You know the response I got when I vetoed these dollars? “Girl, are you crazy, the federal government is handing out free money and if you don’t take it another state’s going to spend it.” Oh this borrowed, debt ridden, government growing money – it is not free money, and taking it takes away anything that is free.

So many in Congress warned the states about the ramifications of accepting the money, and most legislators went around governors who didn’t want to take all the money, and they resolved via resolutions to take the money anyway. But opportunity for development and local control, that is what’s taken away when all of these dollars are accepted without questioning them, because, believe it or not, there are fat strings attached to this borrowed money. See that attitude of free money is wrong.

Finally I have just conceded, I’ve said ok, I just won’t claim that there are strings attached. I won’t use that term anymore. Because the more we dig into these mandates, these connections that the money would have that we would spend coming from the federal government, including the string attached to these dizzying federal debts that we are handing to our kids and to their kids to pay off for us – I can’t say strings attached anymore, now I say they are ropes…They are debt building, binding, controlling ropes and it is bigger government that ultimately will take away our opportunities and our freedoms.

And now precedent says government will bail you out, depending on the decisions that you’ve made if you’re not prudent with your business dollars. Government will buy you out. Anyone need a car? And this is a problem because we cannot afford this government largess and control and unrestrained spending. I don’t think that’s what Seward had in mind. And I do not believe it’s the will of the people.

Lastly she also speaks about the part Alaska plays in our national defense (part 5 below). Watch them all, great speech and a great lady.

You hear and see her Conservative credentials (the reason that the elite want to destroy her) and hope for the future. Wait for the backlash from those cowardly ELITES that basically hate Conservatism. I will never bow to these power brokers, and will back financially and any help needed to oust them from office. They are basically back stabbers and obstructionist, who think they know what’s best for us the every day AMERICAN.

I bet Sarah didn’t need a food taster like Obama did on his Paris date night!

I can only dream of the speech she would have given at Normandy! This woman has smarts, classs, personality plus and has the good of the country first and foremost – She will NEVER apologize to ANYONE for the United States!

Palin critics are trying to acquire information on what gifts she received on her NY trip. Critics are warning her that failure to disclose such gifts will result in future ethics complaints.

MSM is harping that she is under scrutiny over past trips and needs to compensate the state due to bringing her children.

The battle for Dune continues…..

I said when McCain chose Sarah as his running mate that she was a breath of fresh air…she SO still is, and SO much more now after 6 months of NOT hearing a voice of hope nor a voice of support for America’s values and America’s fallen soldiers, coming out of Washington!!! She, like President Bush (and Reagan) knows that it’s about doing the RIGHT thing, as she said several times, not what looks acceptable to the polls!!!

I have supported Sarah Palin for over a year. She is extraordinary and this country would be truly blessed to have her as its President. Governor Palin is smart, tenacious, and spunky. We need her, and I say, “Run, Sarah, Run…”

@Timothy: Palin can’t take her kids along on a trip that commemorates the “funding” father of Alaska at the 50th anniversary of statehood but Obama can assign a government plane just for his kids, wife and mother in law to jet over to Paris, go shopping and fly back?

Someone on our side needs to start making ethics complaints about Obama and give the Dems a taste of the medicine.

So, what happens to the bling that the Saudi king gave BO? Does he get to keep it and let MO wear it on date night?

Sarah has my vote if she decides to run in the next Presidential election, just like I voted for HER and not McCain when he ran his tepid campaign.

[…] This should get really good. As much as the left frantically tried to smear her and write her off, she is going to be a force to be reckoned with. If she is already able to strongly make a case of Obama failing, and clearly show how she tried to warn us this early into Obama’s administration she will be a thorn in the liberal side from here on out. If she plays everything right she could come out as an unstoppable candidate. […]