Poll finds most Americans oppose the closing of Gitmo 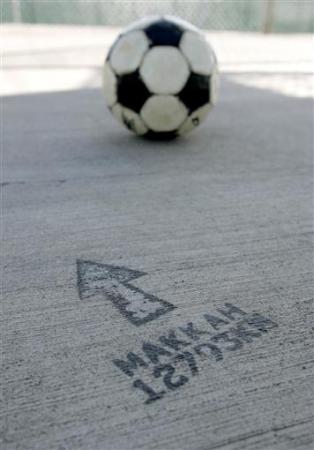 A painted marker in a recreation yard points the direction to Mecca at Camp Delta where detainees are held at the United States Naval Base in Guantanamo Bay, January 18, 2006.
REUTERS/Joe Skipper

While Dick Cheney is not backing down from his claims regarding enhanced interrogations conducted in the early days of the war on terror, a recent poll, for whatever these are worth, has it that most Americans are in agreement with Dick Cheney’s belief that Guantanamo should remain open for business, the least bad option.

WASHINGTON — Americans are overwhelmingly opposed to closing the detention center for suspected terrorists at Guantanamo Bay and moving some of the detainees to prisons on U.S. soil, a USA TODAY/Gallup Poll finds.

By more than 2-1, those surveyed say Guantanamo shouldn’t be closed. By more than 3-1, they oppose moving some of the accused terrorists housed there to prisons in their own states.

The findings underscore the difficult task President Obama faces in convincing those at home that he should follow through on his campaign promise to close the prison in Cuba, especially in the absence of a plan of where the prisoners would go.

Well, at least he was able to keep his campaign promise to his wife. That’s gotta count as a feather in his cap.

In many parts of the world, however, Gitmo has become a symbol of U.S. arrogance and abuse, and Obama has cited its closure as a way to lay the foundation for better relations. He is scheduled to deliver a major address aimed at the Muslim world on Thursday from Cairo.

How about using his political capital with the Muslim world to convince them that Guantanamo is a paradise compared to any other prison/detention facility in the world? How about this: Change the name. Don’t call it “Gitmo”. Change the perception. It’s not a “gulag”. Call it ‘Al muntazah al-dini lilmujaheden al Muslimin,’: “The Religion Resort for Islamic Militants.”

If he can call the “war on Islamic terror” a kinder, gentler PC name (Overseas Contingency Operations) in order to keep prosecuting it without appearing to be perpetuating Bush-era foreign policy, then he can come up with an alternative for Gitmo as well.

That should restore America’s image. [sarcasm] Because being loved by the rest of the world is vastly more important than doing what’s right. [/sarcasm] And if the two are in alignment, then all is harmonious and right with the world.

As for the possibility of finding new homes overseas, no one wants ’em; or those that might, will want to torture them (you know?….as in real torture?):

Perhaps half the 240 detainees now in custody will have to be relocated to countries other than their native lands because they risk being tortured there (or worse) upon their return. For Fried, that means shuttling endlessly between foreign capitals to plead for help, and often to be met by extortionist demands and haughty lectures from foreign diplomats. It is grueling work, making the respected career diplomat something like a door-to-door salesman peddling the human equivalent of radioactive waste.

But perhaps the hardest part is handling the obstacles that keep cropping up in Washington itself. First, there’s the ticking clock of Barack Obama’s pledge to shut Guantanamo by January 2010 — a bold statement that defied the warnings of advisers who said that, if closing Guantanamo were easy, George W. Bush would have made good on his own stated wishes to do so himself. Then, there’s the craven opportunism of members of Congress who want to look tough on terrorism by vowing to block any effort to resettle the wrongly detained here in America. “It is a tough job, to put it mildly,” says Fried. Or, as one friend simply commented after the latest round of congressional grandstanding against accepting the detainees, “Poor Dan.”

As for the ultimate goal of Dan’s job, consider this quote from John Bellinger, who worked as much as anyone to solve this problem in recent years:

Ultimately, says Bellinger, the former Bush official, it may be impossible to find homes in humane countries for the vast majority of the men at Guantanamo. As a fallback, the United States might have to repatriate some of the men to their repressive home countries after all — which would leave Fried the task of winning promises of good treatment from those governments. “Those are some of the toughest negotiations,” says Bellinger, “where we say we have to have high-level, ironclad, specific assurances that [detainees] will not be mistreated, but with some kind of monitoring mechanism.”

What is dawning on the Obama administration is that, in the moral interest of closing Guantanamo, they’ll have to cut some moral corners elsewhere. This is not a new idea, and it’s what makes the prison dilemma so hard. Maybe those “assurances” and “monitoring mechanisms” will hold up. But it’s very possible they won’t, and to some degree the administration will just have to look the other way, or else Guantanamo will be open forever. Other moral corner-cutting might (and likely will) include holding more detainees in Bagram Air Base, or just killing more of them preemptively on the battlefield so as to avoid the whole problem of detention altogether, as Jack Goldsmith suggested this weekend in the Washington Post.

If the Obama Administration is sincere in its desire to keep America safe as well as champion human rights (as opposed to the appearance of standing for human rights), then it will swallow its own pride, admit it was wrong and uninformed on Guantanamo during its presidential campaign, and begin making the case for why the detention facilities should remain open for business.

After all, it’s the moral option.

“*…no one wants ‘em; or those that might, will want to torture them (you know?….as in real torture?)

And right there you have the reason to keep GITMO, these ‘folk’ are being kept in ‘Protective Custody’. No country can guarantee their safety not even in the USA.
.