It’s a tough life, being a wannabe-martyr… 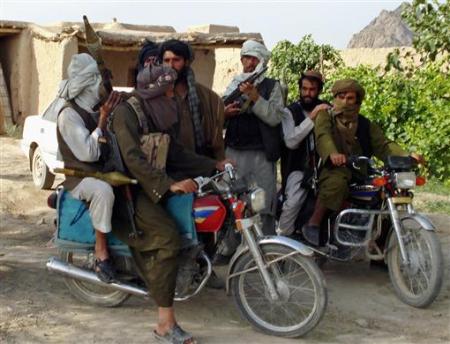 Taliban fighters ride on their motor bikes in an undisclosed location in the south of Afghanistan May 13, 2008.
REUTERS/Stringer

Cue the violin and color me unsympathetic. I simply found this disillusionment amongst jihadi-wannabes simply amusing and pathetic:

Reporting from Brussels — Determined to die as martyrs, the French and Belgian militants bought hiking boots and thermal underwear and journeyed to the wilds of Waziristan.

After getting ripped off in Turkey and staggering through waist-deep snow in Iran, the little band arrived in Al Qaeda’s lair in Pakistan last year, ready for a triumphant reception.

“We were expecting at least a welcome for ‘our brothers from Europe’ and a warm atmosphere of hospitality,” Walid Othmani, a 25-year-old Frenchman from Lyon, recalled during an overnight interrogation in January.

Instead, the Europeans — and at least one American — learned that life in the shadow of the Predator is nasty, brutish and short.

Wary of spies, suspicious Al Qaeda chiefs grilled the half-dozen Belgians and French. They charged them $1,200 each for AK-47 rifles, ammunition and grenades. They made them fill out forms listing next of kin and their preference: guerrilla fighting, or suicide attacks?

Then the trainees dodged missile strikes for months. They endured disease, quarrels and boredom, huddling in cramped compounds that defied heroic images of camps full of fraternal warriors.

“What you see in videos on the Net, we realized that was a lie,” Othmani told police. “[Our chief] told us the videos . . . served to impress the enemy and incite people to come fight, and he knew this was a scam and propaganda.”

Disenchantment aside, the accounts of four of the returning militants arrested in Europe combine with intercepts to paint a detailed picture of Al Qaeda’s secret compounds. They also reinforce intelligence that a campaign of U.S. Predator drone airstrikes has sown suspicion and disarray and stoked tension with tribes in northwestern Pakistan, anti-terrorism officials say.

At the same time, the case shows that wily militant leaders still wage war in South Asia and train a flow of foreign recruits. The few trainees from the West remain an urgent concern. Anti-terrorism forces have detected at least one American, a convert to Islam, who trained with Al Qaeda in Pakistan during the last year, Western officials say.

Militant paths from the U.S. and Europe may cross: Prosecutors in Brussels have made a request to interrogate a witness now in the United States who was in Pakistan with the European suspects, a Belgian anti-terrorism official said.

Police in Europe tracked the group’s radicalization and travel with the help of real-time U.S. intercepts that corroborate the confessions, and they exploited the men’s reliance on the Internet. Fear of an imminent attack spurred their arrests here in December after Hicham Beyayo, 25, a Belgian just back from Pakistan, sent a troubling e-mail to his girlfriend.

“I am leaving for an O [operation] and I don’t think I will return,” Beyayo wrote Dec. 6, according to investigative documents. “My request has been accepted. You will get a video from me to you from the [organization].”

Beyayo told police that he was boasting to impress his girlfriend. But investigators believe the group may have been groomed for missions at home.

“They were much more valuable for operations in Europe,” said the Belgian anti-terrorism official, who, like others interviewed, requested anonymity because the investigation is continuing. “Al Qaeda does not need Belgians and French to fight in Afghanistan.”

Beyayo is about 5-foot-5, chubby and bespectacled. Like the others, he is of North African descent. He grew up in the tough Anderlecht neighborhood of Brussels, and his brothers have done time for robbery and arms trafficking. But he does not have a criminal record. He interspersed college courses with fundamentalist Islam.

“He is the intellectual of the family,” said his lawyer, Christophe Marchand. “He bears no ill will against Belgium. He went to Afghanistan to join an Islamic resistance movement.”

Islamic resistance is expensive. The unemployed Beyayo scrounged together about $5,000 for the trip.

The Frenchman Othmani, a father of two, had to borrow about $1,000 from his mother, and he spent hundreds on hiking boots, a sleeping bag, thermal underwear and a “big Columbia-brand jacket for the cold.”

The leader was Moez Garsalloui, 42, a Tunisian married to the Belgian widow of a militant who killed Ahmed Shah Massoud, an anti-Taliban warlord, in a suicide bombing two days before the Sept. 11 attacks.

The balding, bearded Garsalloui sought recruits among visitors to a radical website run by his wife, who is revered in militant circles.

It was Garsalloui’s first trip to South Asia, but he took advantage of his wife’s strong Al Qaeda ties, investigators say. He organized smuggling contacts and met four Belgians and two French in Istanbul in December 2007. He carried a bag full of cash — about $40,000, according to the confessions.

Garsalloui went ahead alone, leaving the others to a harsh monthlong trek. Turkish smugglers frightened them by waving a pistol around, charged extra because they were “Arabs,” and stole their gear and clothes, claiming it was for charity.

“They cleaned us out,” Othmani recalled. “What they took was for the so-called poor, but evidently it was nothing of the kind.”

Later, the recruits tried to burn their passports “because we all intended to die as martyrs in Afghanistan,” Othmani said. But the smugglers confiscated the documents.

Next came a nocturnal mountain crossing into Iran. The recruits struggled through deep snow. A Belgian’s foot turned blue. Beyayo fell repeatedly, dragged along by comrades as he moaned that this was the place where they would die.

After several men called their mothers from Iran, the group entered Pakistan via Zahedan, an Iranian border town that is a hub for militants and smugglers, the Belgian anti-terrorism official said. As they approached the tribal zone dominated by the Taliban, military patrols looked the other way and diners at a roadside restaurant seemed to know exactly where they were headed.

Their destination was a village in the Waziristan region about two hours past Bannu. But the reception was nothing like the heyday of the Afghan camps when Westerners, especially converts, got a chance to meet Al Qaeda leader Osama bin Laden himself.

Saudi Arabians armed with AK-47s emerged from a mosque looking hostile. They thought the French in particular could be spies, a senior French anti-terrorism official said. Increasing infiltration has contributed to recent captures and killings of militants, investigators say.

“They thought they would get a hero’s welcome because they were Europeans,” the Belgian official said. “That was not the case.”

Tensions eased when Garsalloui showed up. But the recruits were kept in a kind of limbo. They had the misfortune of arriving just as U.S. forces unleashed a drone-fired missile barrage that would kill half a dozen veteran Al Qaeda chieftains in 2008. In an e-mail to his wife, Garsalloui said he narrowly escaped a strike that had killed a top Libyan. “I came close to dying,” he wrote.

In other words, you just missed martyrdom. Face it: You’re a failure, and now your al-Qaeda-linked wife knows it.

Fearful of the drones as well as informants spotting them and targeting hide-outs for missile strikes, the trainees hunkered inside during the day. They moved frequently among crowded, squalid houses shared with local families in mountain hamlets.

Hoping to fight the Americans

The suspects say they wanted desperately to fight American troops in Afghanistan. To their dismay, the chiefs made them cough up more cash for weapons. They were assigned to train with an Arab group numbering 300 to 500, but spread out in small units for security. Religious and military instruction took place indoors, with firearms and explosives sessions confined to courtyards for secrecy.

A Saudi chief named Mortez assured the Europeans that they would go to the Afghan front. But idle weeks followed.

“We were quite angry for different reasons,” Beyayo recalled. “We waited and Mortez’s promises didn’t come true. Life as seven together plus the host family was not always easy. And . . . [Garsalloui] played the little boss and gave us orders.”

Only Garsalloui and a strapping Belgian, who both spoke fluent Arabic, went to Afghanistan as part of a Saudi unit.

Garsalloui later e-mailed a photo of himself wielding a grenade launcher to his wife. He bragged to comrades that he had killed American soldiers with a bazooka. Investigators are trying to verify the claim.

“We realized with time that this individual was there to test us, to spy on us,” Beyayo recalled.

“He also gave us a speech according to which we should not dream because we were not ready to fight. . . . The idea of going back to Belgium and France began to form among us. Morale-wise, we were crushed.”

One Belgian stormed out, intent on reaching the nearest city on his own and making his way back to Europe, the Belgian anti-terrorism official said. After hours of hiking through a desolate valley, he realized that it was hopeless and turned back.

Late last year, Beyayo, Othmani and two others finally came home and into the clutches of police, who had monitored them closely. A central question: the extent of their involvement in terrorist activity.

Their defense lawyers insist that they are failed holy warriors.

Sounds like they should have a film crew chronicle their failed exploits and turn it into a reality-based sob show: Who will be Europe’s next top tough-enough terrorist?