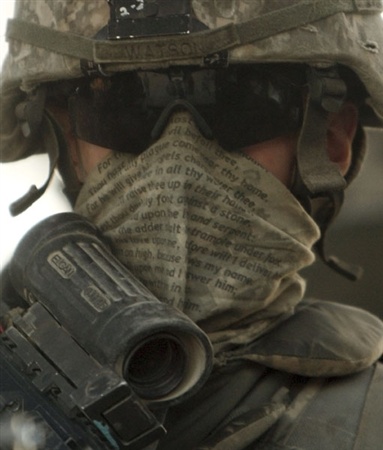 A U.S. soldier covers his face with a scarf during a patrol in Baquba, in Diyala province some 65 km (40 miles) northeast of Baghdad October 17, 2008. The scarf has verses from Psalms 91 of the Bible printed on it.
REUTERS/Goran Tomasevic (IRAQ)

I love the photo.

Love expressions of faith and piety; and respect soldiers’ needs and desire to draw comfort and inspiration from religion.

I myself am non-religious but appreciate the virtues of American Judeo-Christian traditions and heritage.

But this I find disturbing:


I don’t know much about this story beyond the video and the U.S. Army apparently destroying Bibles they confiscated at Bagram in wake of the Al Jazeera story. But unlike the cover sheets on intelligence briefings provided to President Bush, the circumvention around General Order Number One comes across to me as stupid on the part of the Army Chaplain and those involved in this. Trying to convert Muslims to any other faith is a crime in Afghanistan and feeds into the propaganda of our enemies who wish to recruit more Muslims to their cause by creating the perception of a religious war by Christian aggressors in Muslim lands.