“God must have a special place for soldiers.” 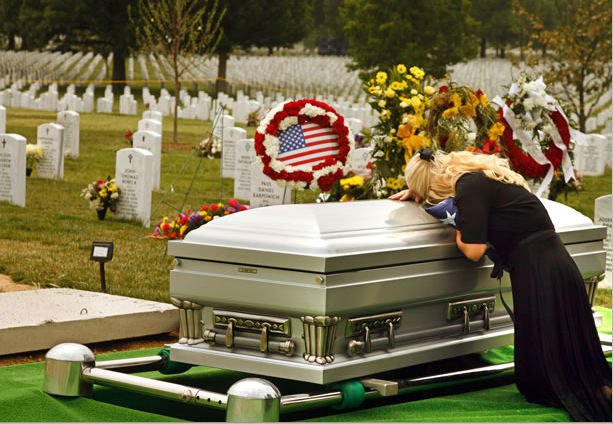 3 years ago, I made a Veterans Day post transcribing a letter Michael Medved read on his radio program, The Three Big Lies About Vietnam. Here is that segment of the show; it requires 3-and-a-half minutes of your time, and I’ll be very much surprised if they are 3 minutes you’ll want back, after listening.

“Taking Chance” is airing on HBO tonight. I recommend it highly, commend HBO for dealing with an American Tradition of Honoring our fallen tastefully and a degree of dignity. Coming from the same folks that offer Bill Maher, it is amazing.

God has a special place for Soldiers, conscripted, volunteers or professionals.

I also believe that there is a special place in hell for career politicians, rapists, child molesters, terrorists and others that prey upon the weak, the ignorant or place shameless debt upon the taxpayers for personal benefit.

Way to go Old Trooper. You are right on the money.

the photo is a heart breaker, old trooper said it well.

Great clip.
Is there a link to the 3 big lies?

Check the links to the audio in my original post. If they don’t work anymore, let me know.

That photo — Do any of the moonbats who desecrate and deprecate our men and women in uniform have any idea as to the sacrifices made so that these moonbat idjits can have their freedoms?

Excellent audio! I’ve never before heard it. You were right: I’m glad that I spent a few minutes to listen to it.

I spent part of this morning going through link after link of lefty blogs on my sidebar to read Memorial Day posts. Practically zip. Almost nada. Juan Cole’s post today was all the negative going on in Iraq fit to print; plus, thrown in at the bottom of his post is a video about Iraqis upset because a U.S. soldier did not receive the death penalty for raping and killing an Iraqi minor. That’s a post fit for Memorial Day?!?

Respect for all those allied soldiers who fought in WWI & WWII as well as those who fight in more recent wars. For those who believe in God – what place does God have for those soldiers who fought on behalf of Germany or Japan in WWII or for Iraq in the Iraqi war? Are they only following orders so they don’t have any blame for the atrocities committed by their side?

For those who believe in God – what place does God have for those soldiers who fought on behalf of Germany or Japan in WWII or for Iraq in the Iraqi war? Are they only following orders so they don’t have any blame for the atrocities committed by their side?

First: The non- religious response. Welcome to the “enemy combatant” or illegal combatant vs POW/soldier argument, Gaffa. Maybe you didn’t “get it” before. German soldiers were fighting, under orders, from the “State”… i.e. Hitler. Granted some may have believed in the cause. Others may not have, but didn’t have the cajones to desert. No doubt to do so would have been far from pleasant.

On the other hand, jihad movements are not fighters under order from any state government. They are culpable and responsible for their own choices as stateless, gang thugs. Just as a Blood or Crip gang member has the choice to belong to a rogue gang bent on overthrowing an elected goverment. They are not a signatory to treaties, not recognized as anything but power hungry mongrels seeking a Caliphate. They are ideologues, as opposed to soldiers acting under orders. Monstrous difference. And perhaps you may have a more cogent grasp of the GC with this revelation.

As far as God goes, since you are (if I remember rightly) a professed atheist, you obviously know little of Christianity and acceptance of Christ as the path to Heaven. God does not require people are free of sin to enter. There is no man that is free of sin… period.

This, in Christian theology, answers your agnostic, and unschooled question. German Christian soldiers, like any other Christian sinner, is welcome into the Kingdom of God if they are a believer of Christ as the Son of God. No other requirement.

Other religions and “requirements”? Haven’t a clue. But as a non-believer, consider yourself now educated that, in Christianity, it’s not actions, deeds and events that gets a person in or out of the Pearly Gates… merely an unshakeable belief in the Messiah, not known as Barack Obama, as the Son of God manifested in human form on Earth.

In regards to entering heaven – even Christians can’t agree amongst themselves on the entry requirements.

Hello, thank you very much for this post, cheers

WORDSMITH, THE VIDEO COULD NOT OPEN IT WAS WRITTEN DU TO COMPLAINT OF
RIGHTS OF OWNERS, SOMETHING SIMILAR, BUT THE PICTURE IS VERY TELLING,
YES I beleive that GOD HAS A SPECIAL PLACE FOR THE BRAVEST , WHICH SOLDIERS ARE A BIG PART OF IT, THANK YOU

Try it now. I just replaced the old link when you posted.

Wordsmith, wow thank you, for allow me to hear that precious letter.

This is the second entry I read tonight. And I am on my third. Thank you.

KP YOHANNAN, WELCOME ABOARD,
a lots of gooddies here,

Thank you for sharing this. Well done and very informative.

DAVID BARTON, WELCOME SR,
check the other POSTS , too, and come back

Good deal Wordsmith! Excellent Audio!
I think most all of us who have held the line regardless of in war or in peace would agree if you have some level of intelligence and integrity serving in the military gives a wake up call to reality and a clear definition of how important it is to be truthful. Thus purging the illusions and poison implanted by Hollywood! No question G-d (or the eternal higher authority for those of you who can’t stomach others beliefs) does have a special place for soldiers!
In fact some countries such as Israel who have mandatory conscription show that the success in life and business or careers is much much higher in those who serve verses those who do not! Joey was a product of a special generation, the clarity and composition was outstanding! May we somehow be blessed again with men like Joey to return this nation to what it needs to be!

@MataHarley: I understand your point however….How many people in Japan believed that the leader of their empire was god? The comprehension of ” Soldiers” here is not for the puppets of dictators or Fascist, of Communist who mostly are Atheist, or Terrorist who blow up old woman and children! Fanatics and Extremist do not have any regard for life are not identifiable as “Soldiers” in the context of this article. As you wrote:

For those who believe in God – what place does God have for those soldiers who fought on behalf of Germany or Japan in WWII or for Iraq in the Iraqi war? Are they only following orders so they don’t have any blame for the atrocities committed by their side?

As a Jew I would not have any problem fighting along side certain Muslims seeing we even have the same enemies on many fronts (understanding that they also are engaged in the fight against terrorism). In fact the little country of Bahrain (approximately 800,000 pop.) broadcast everyday many times a day against terrorism and advertise for a sound family life. They even name the organization who are terrorist in their broadcast! (No wonder Hillary spoke up for the Shais! (Shiites) and spoke against the Bahraini’s) We could not do that here because this Administration is in partnership with them! Like Fatah, like Hamas, ….would anybody with any understanding of what humanity is ever classify them as “Soldiers” in the context of this article?

Word Thanks. As mentioned I visited the travelling V.N. wall a couple of weeks ago and would recommend this experiance to all who are able.
BTW I’ve been following Medved since your Pallin post intro. and find him very informative .

Semper Fi a V.N. survivor by the Grace Of God

Glad you guys are (re)discovering some of the old posts in the archives. There are some things worth revisiting and I hadn’t bothered to listen to the audio when I posted the replacement embed for bees, recently.

BTW I’ve been following Medved since your Pallin post intro. and find him very informative .

Thanks for letting me know that! A number of hardline conservatives get annoyed with him because he doesn’t swing far-right enough. For someone like myself, center-right, he’s in the goldilocks zone. I think he’s got one of the best programs on air. One of the best things about his show is that he invites debate from callers- whether to the left or to the right of him; and usually, he’s pretty civil even when the caller has lost it. I don’t even always agree with him, which is part of the draw. Having someone on your side of the aisle who you are disagreeing with, makes you think a little harder on the issue, sometimes.