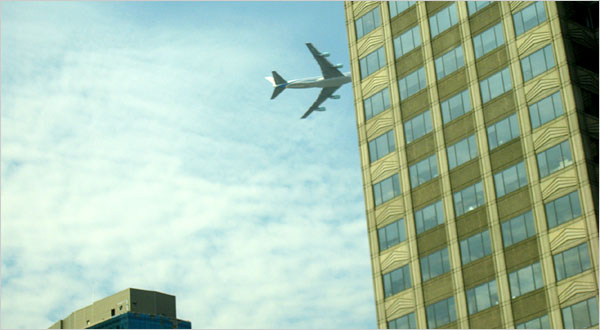 A jet normally used as Air Force One rattled windows and workers Monday morning. President Obama, who was not aboard, was reported to be furious.
Jim Brown

How does One cap off One’s first 100 Days? By causing a NYC panic attack in an Air Force One photo-op gone bad:

It was supposed to be a photo opportunity, a showcase of Air Force One alongside the sweep of New York City skyline.

But as the low-flying Boeing 747 speeded in the shadows of skyscrapers, trailed by two fighter jets, the sight instead awakened barely dormant fears of a terrorist attack, causing a momentary panic that sent workers pouring out of buildings on both sides of the Hudson River.

“I thought there was some kind of an attack,” said Paul Nadler, who sprinted down more than 20 flights of stairs after watching the plane from his office in Jersey City shortly after 10 a.m. “We ran like hell.”

In fact, the blue and white plane with “The United States of America” emblazoned on its side was one of two regularly used by the president. It was soaring above Lower Manhattan, Staten Island and Jersey City so government photographers could take pictures near the Statue of Liberty for publicity purposes.

Aides to President Obama, who was not on board, said he was incensed when he learned of the event Monday afternoon. The White House later issued a formal apology.

Witnesses described the engine roar as the planes swooped by office towers close enough to rattle the windows and prompt evacuations at scores of buildings. Some sobbed as they made their way to the street.

“As soon as someone saw how close it got to the buildings, people literally ran out,” said Carlina Rivera, 25, who works at an educational services company on the 22nd floor of 1 Liberty Plaza, adjacent to the site of the Sept. 11, 2001, attack. “Probably about 80 percent of my office left within two minutes of seeing how close it got to our building.”

I hope the White House got their photos…I’m sure the one I published in this post won’t make the cut for the WH website; but it’s the One this photo-op will be remembered for.

You can all draw your own symbolic meaning from this.

Check out the video of the panick which ensues.

Lefty blogger says the President was merely showing Wall Street bankers who wears the pants in this country:

They — and you — just got a wakeup call: a friendly reminder who wears the pants around here, and who HOPES they can find a CHANGE of pants right about now.