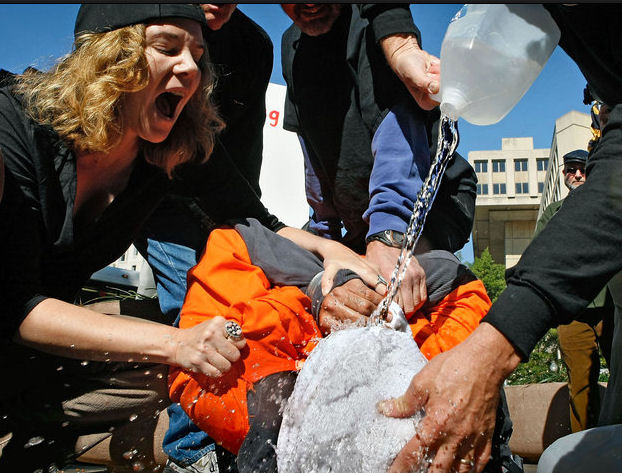 Maboub Ebrahimzdeh during a water boarding demonstration by human rights activists in front of the Justice Department in Washington. Protestors are demonstrating against the confirmation of Attorney General Michael Mukasey.
Mark Wilson – Getty Images

“On the question of so-called torture, we don’t do torture. We never have. It’s not something that this administration subscribes to. Again, we proceeded very cautiously. We checked. We had the Justice Department issue the requisite opinions in order to know where the bright lines were that you could not cross.

The professionals involved in that program were very, very cautious, very careful — wouldn’t do anything without making certain it was authorized and that it was legal. And any suggestion to the contrary is just wrong. Did it produce the desired results? I think it did. “– Dick Cheney, ABC News exclusive interview on Dec. 15, 2008

I was hoping one of the FA authors would blog about the Obama Administration’s declassification of 4 memos from the Justice Department’s Office of Legal Counsel, from 2002 to 2005.

I haven’t had time to read up on these releases; and since no one else has made a post as of yet, I figured I’d put out an open thread before it becomes yesterday’s the other day’s news.

Was the Administration right in releasing these? For what purpose does it serve the public?

Did the “harsh interrogation techniques”, from what we know, constitute “torture”? And did they achieve any positive results in the way of actionable intelligence?

Memorandum for John A. RIZZO
SENIOR DEPUTY GENERAL COUNSEL, CENTRAL INTELLIGENCE AGENCY
Re: ApplicatiQnoJ18 u.S.C. §§ 23·(0-23404 iol!l1~f:eililttiqull’s
That May Be Used in the Interrogation of a High Value al Qaida Detainee

May 10,2005
Memorandum for JOHN A. RIZZO
SENIOR DEPUTY GENERAL COUNSEL, CENTRAL INTELLIGENCE AGENCY
Re: Application of18 USc. §§ 2340-2340A to Use Certain Techniques
in the Interrogation of High Value al Qaeda Detainees

May 30, Z005
MEMORANDUM FOR JOHN A. RIZZO
SENIOR DEPUTY GENERAL COUNSEL, CENTRAL INTELLIGENCE AGENCY
Re: Application of United States Obligations Under Article I6 of the United Nations Convention Against Torture and to Certain Techniques that May Be Used in the Interrogation of High Value al Qaeda Detainees

Also of interest:
The President Ties His Own Hands on Terror
The point of interrogation is intelligence, not confession.
By MICHAEL HAYDEN and MICHAEL B. MUKASEY