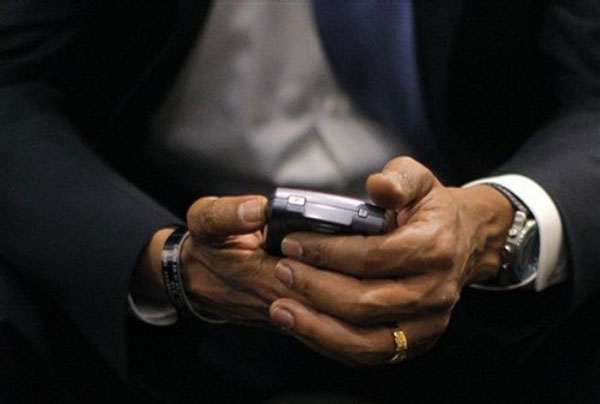 Democratic candidate hopeful, Barack Obama, on the campaign trail in January of ’08:

Obama: No warrantless wiretaps if you elect me

HANOVER, N.H.–Barack Obama may be leading the Democratic presidential pack in every major poll here, but that didn’t dissuade the Illinois senator from a final early-morning rally with the Facebook generation.

Clearly not content to leave their votes to the whims of online politicking, the Illinois senator stepped onto a stage fashioned in a Dartmouth College gymnasium, pulled an index card from his inside jacket pocket, and launched into a familiar set of talking points centered on what has become a familiar theme for his campaign: change and hope.

“My job this morning is to be so persuasive…that a light will shine through that window, a beam of light will come down upon you, you will experience an epiphany, and you will suddenly realize that you must go to the polls and vote for Barack,” he told a crowd of about 300 Ivy Leaguers–and, by the looks of it, a handful of locals who managed to gain access to what was supposed to be a students-only event.

For one thing, under an Obama presidency, Americans will be able to leave behind the era of George W. Bush, Dick Cheney and “wiretaps without warrants,” he said. (He was referring to the lingering legal fallout over reports that the National Security Agency scooped up Americans’ phone and Internet activities without court orders, ostensibly to monitor terrorist plots, in the years after the September 11 attacks.)

It’s hardly a new stance for Obama, who has made similar statements in previous campaign speeches, but mention of the issue in a stump speech, alongside more frequently discussed topics like Iraq and education, may give some clue to his priorities.

In our own Technology Voters’ Guide, when asked whether he supports shielding telecommunications and Internet companies from lawsuits accusing them of illegal spying, Obama gave us a one-word response: “No.” 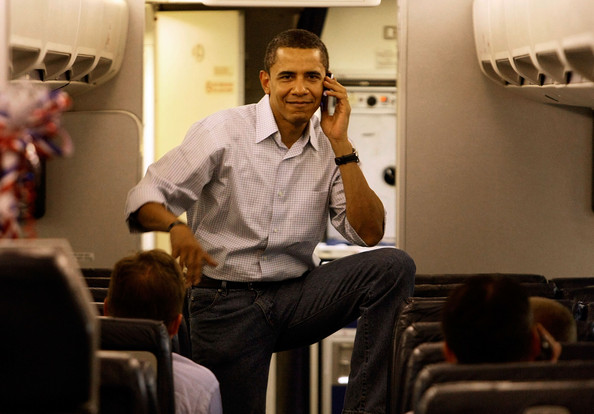 Some liberal Obama supporters were getting a clue on Iraq and wiretaps during the campaign season; but still, they came out to bat for The One, putting their eggs in the basketcase of “hope” and “change”.

So after campaigning strongly against the Bush playbook, after being sworn in, after receiving security briefs, now that he’s responsible for the consequences of making decisions, what does President Obama do? Adopt from the Bush playbook:

Some are even saying that in Warrantless Wiretapping Case, Obama DOJ’s New Arguments Are Worse Than Bush’s:

Friday evening, in a motion to dismiss Jewel v. NSA, EFF’s litigation against the National Security Agency for the warrantless wiretapping of countless Americans, the Obama Administration’s made two deeply troubling arguments.

First, they argued, exactly as the Bush Administration did on countless occasions, that the state secrets privilege requires the court to dismiss the issue out of hand. They argue that simply allowing the case to continue “would cause exceptionally grave harm to national security.” As in the past, this is a blatant ploy to dismiss the litigation without allowing the courts to consider the evidence.

It’s an especially disappointing argument to hear from the Obama Administration. As a candidate, Senator Obama lamented that the Bush Administration “invoked a legal tool known as the ‘state secrets’ privilege more than any other previous administration to get cases thrown out of civil court.” He was right then, and we’re dismayed that he and his team seem to have forgotten.

Sad as that is, it’s the Department Of Justice’s second argument that is the most pernicious. The DOJ claims that the U.S. Government is completely immune from litigation for illegal spying — that the Government can never be sued for surveillance that violates federal privacy statutes.

This is a radical assertion that is utterly unprecedented. No one — not the White House, not the Justice Department, not any member of Congress, and not the Bush Administration — has ever interpreted the law this way.

Previously, the Bush Administration has argued that the U.S. possesses “sovereign immunity” from suit for conducting electronic surveillance that violates the Foreign Intelligence Surveillance Act (FISA). However, FISA is only one of several laws that restrict the government’s ability to wiretap. The Obama Administration goes two steps further than Bush did, and claims that the US PATRIOT Act also renders the U.S. immune from suit under the two remaining key federal surveillance laws: the Wiretap Act and the Stored Communications Act. Essentially, the Obama Adminstration has claimed that the government cannot be held accountable for illegal surveillance under any federal statutes.

Again, the gulf between Candidate Obama and President Obama is striking. As a candidate, Obama ran promising a new era of government transparency and accountability, an end to the Bush DOJ’s radical theories of executive power, and reform of the PATRIOT Act. But, this week, Obama’s own Department Of Justice has argued that, under the PATRIOT Act, the government shall be entirely unaccountable for surveilling Americans in violation of its own laws.

Out-Bushing Bush, the Examiner Editorial describes this as “Warrantless Wiretaps on Steroids”:

The Cybersecurity Act of 2009 – introduced by Senate Intelligence Committee chairman Jay Rockefeller, D-WV, and cosponsor Olympia Snowe, R-ME – bypasses all existing privacy laws and allows White House political operatives to tap into any online communication without a warrant, including banking, medical, and business records and personal e-mail conversations. This amounts to warrantless wiretaps on steroids, directed at U.S. citizens instead of foreign terrorists.

The bill gives the Secretary of Commerce and a new national cybersecurity czar power to shut down all Internet transmissions in the event of a yet-to-be defined “cyber emergency.” This is a dangerous power, even for a president who in a 2008 campaign appearance at Dartmouth College harshly criticized Bush for anti-terrorist “wiretaps without warrants,” and promised that if elected he would leave such policies behind.

Perhaps what the hysteria-driven Bush deranged as well as the citizen-critics with reasonable concerns don’t seem to understand is that President Bush kept America safe after 9/11 not by accident, but by design through implementation of such tools as the Patriotic Act and NSA Surveillance program. It’s something that the Constitutional Law professor lecturer turned PotUS perhaps understands as well, now that he is sitting in the big chair, privy to all the national security briefs.

For all the uproar and shrill scaremongering over civil liberties violations, there’s nothing “unprecedented” here:

If you want to see real abuses of civil liberties, read Geoffrey R. Stone’s 2004 book “Perilous Times: Free Speech in Wartime from the Sedition Act of 1798 to the War on Terrorism.” It tells how John Adams jailed a congressman for criticizing his “continual grasp for power.” How Abraham Lincoln suspended habeas corpus and had the army arrest up to 38,000 civilians suspected of undermining the Union cause. How Woodrow Wilson imprisoned Socialist Party leader Eugene Debs for opposing U.S. entry into World War I. And how Franklin D. Roosevelt consigned 120,000 Japanese Americans to detention camps.

You can also read about how presidents from FDR to Richard Nixon used the FBI to spy on, and occasionally blackmail and harass, their political opponents. The Senate’s Church Committee in 1976 blew the whistle on decades of misconduct, including FBI investigations of such nefarious characters as Eleanor Roosevelt, William O. Douglas, Barry Goldwater and the Rev. Martin Luther King Jr.

All you have to do is recite this litany of excess to realize the absurdity of the cries of impeachment coming from the loonier precincts of the left. Muttering about “slippery slopes” isn’t enough to convince most people that fascism is descending. If the president’s critics want that part of the nation that doesn’t read the Nation to believe that he’s a threat to our freedom, they’d better do more than turn up the level of vituperation. They’d better find some real victims—the Eugene Debses and Martin Luther Kings of the war on terror. 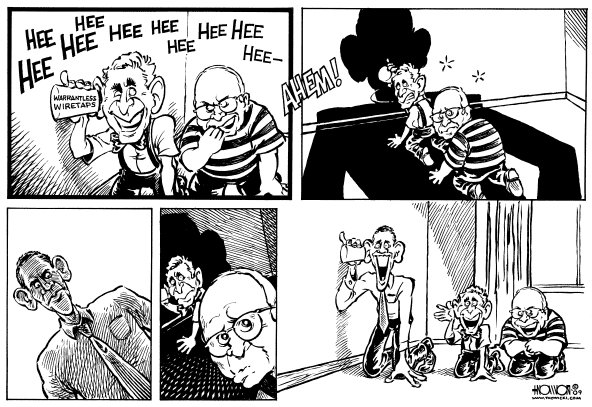 Woooo-weeeee! Those were some bombshells!!  Maybe the ...
The Great Replacement Theory is not a theory. It's here. Now.

Woooo-weeeee! Those were some bombshells!! A whole bunch o...