The notion that George W. Bush made us hated around the world is scapegoat drivel. Anti-Americanism has been alive, kicking and screaming in the world long before his administration ever took power, and will continue long after his departure…. 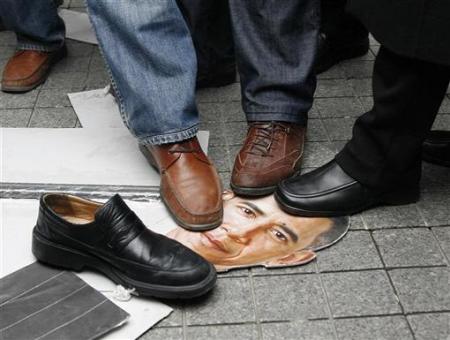 When President Obama visits Turkey early next month, some observers are expecting he will use the occasion to deliver on his promise to deliver a major foreign policy speech from a Muslim nation in his first 100 days. But indications are that he will not give the speech in Turkey. The White House and State Department have not yet decided on the location for the speech, which is meant to undo some of the damage done to America’s image in the Muslim world during the George W. Bush Administration.

Liberal propaganda and a complicit media that fueled and indulged Middle East paranoia, conspiracy, and European anti-Americanism is what damaged America’s image and credibility in the Muslim world during the “reign” of “King” George (who stepped down from the “throne” after 8 years of “imperialism” and “unconstitutional” overreach of executive authority).

President Obama’s speech was delivered in Turkey. As reported by the BBC:

Mr Obama devoted much of his speech to calling for a greater bond between Americans and Muslims, admitting that “the trust that binds us has been strained”.

“Let me say this as clearly as I can: the United States is not and will never be at war with Islam,” he stated.

“In fact, our partnership with the Muslim world is critical in rolling back a fringe ideology that people of all faiths reject.”

He said: “The United States has been enriched by Muslim Americans. Many other Americans have Muslims in their family, or have lived in a Muslim-majority country – I know, because I am one of them.”

“And when people look back on this time, let it be said of America that we extended the hand of friendship,” he said.

“There is an old Turkish proverb: ‘You cannot put out fire with flames.'”

How is this a departure from George W. Bush? How is the diplomatic tone any different? The extended hand of friendship and alliance? Of mutual interests?

George W. Bush was never disrespectful to the Muslim world. He was extraordinarily careful to telegraph his respect for the Muslim faith — some thought to a fault. (“Why is it,” asked one wag, “that the only people who say Islam is religion of peace are Christians?”) Bush made the Feast of Eid, which marks the end of Ramadan, an annual White House celebration with prominent Muslim guests. He arguably saved more Muslim lives through the African AIDS initiative than any other world leader could claim. Mrs. Bush made improving the lives of women and girls in Afghanistan her special project. In the immediate aftermath of the 9/11 attacks, when this was not an obvious move, he visited the Islamic Center in Washington, D.C., to telegraph to the nation that anger toward American Muslims would be a misplaced response to the atrocity.

This caricature of Bush as a heedless militarist and xenophobe — which no one is doing more to promote than the current president — is a libel.

And despite the post-war hardships, he’s essentially liberated 50 million Muslims and set them on the path toward democracy.

Rather than set the record straight and defend the previous American president, our current one indulges, perpetuates, and gives validation to the wrongful misperception that America (especially under the leadership of Bush for 8 years) has been arrogant and at war against Muslims.

America has spent blood and treasure in the defense of Muslims. (You’re welcome). And that’s the reality that President Obama should be stressing if he wants to repair America’s image abroad.

For all his concession/compromising/appeasement/blame America first apologist diplomatic rhetoric, what did President Obama gain from it, on behalf of America? Mona Charen:

But as former Ambassador John Bolton reminds us, during the glory days of the Clinton administration, French President Francois Mitterrand said this: “We are at war with America– a permanent war … a war without death. They are very hard, the Americans. They are voracious. They want undivided power over the world.” Compared with that, the most stinging rebuke to come out of the Bush administration — Rumsfeld’s swipe about “old Europe” — seems downright polite.

There’s nothing wrong with pleasant atmospherics, of course. And if Barack and Michelle Obama wowed the crowds in London and Prague, that’s nice. But what you might have missed in all the hyperventilating in the media about the new incarnation of Jack and Jackie was that President Obama was rebuffed by Europe. He had asked them to pass stimulus bills like the one the Democrats passed in the U.S. Germany’s Angela Merkel and the others turned that down flat. European nations have even graver problems with promised social safety net programs than we do, and they sensibly decided that further indebting themselves would aggravate rather than alleviate their troubles.

President Obama further requested that more troops be sent to Afghanistan. He wasn’t subtle about it either. “Europe should not simply expect the United States to shoulder that burden alone,” he said. “This is a joint problem and it requires a joint effort.” Adoring crowds notwithstanding, they refused that request as well. Oh, wait. That’s not quite true. According to Fox News, “Belgium offered to send 35 military trainers and Spain offered 12.”

Funny how President #44 tries to distance himself from being President #43; yet can’t help but follow in #43’s footsteps when it comes to imitating all the things that President Bush got right:

After a week spent assuring the world that he is antithesis of his widely despised predecessor, President Barack Obama ended his first presidential overseas trip by doing a George Bush. In style, substance and photo-ops, Obama’s unannounced stopover in Baghdad was straight out of the Bush playbook.

Login
wpDiscuz
59
0
Would love your thoughts, please comment.x
()
x
| Reply
‹ Back to Categories