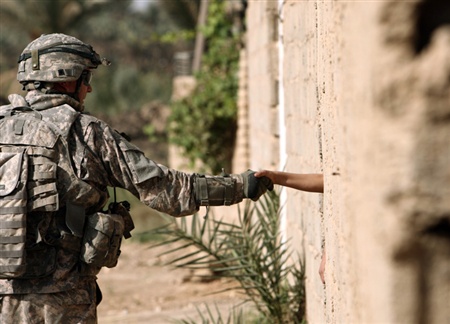 A U.S soldier shakes the hand of an Iraqi boy during a patrol in Baquba, in Diyala province some 65 km (40 miles) northeast of Baghdad, October 21, 2008.
REUTERS/Goran Tomasevic

Over the weekend, Curt posted a litany of successes going on over in Iraq within just the past week alone.

If not for alternative media and non-mainstream sources, you’d be hard-pressed to hear anything about the continued positive trend in Iraq. It’s not that the information isn’t there and isn’t being covered and reported on by MSM (note the polls cited below are by ABC, BBC, and NHK); it’s just that they aren’t telegraphed as front-page newsworthy items, worth repeating over and over again until it gets hammered into people’s subconscious…..like “Iraq is a failure” and “Iraq is in a civil war” mantras were repeated over and over…

A poll of average Iraqis conducted by ABC News, the BBC and Japan’s NHK shows significant progress on virtually all fronts. Yet, we’ve heard nary a peep about it from anyone.

Some 85% of respondents said their neighborhood security was “good,” vs. 62% a year ago and just 43% in August of 2007. And 52% said security had gotten better in the last year — during the Bush-Petraeus “surge,” which was widely ridiculed at the time as an unnecessary escalation of the Iraq War.

Support for democracy jumped to 64%, a 21-percentage-point gain since 2007, according to a report on CNSNews.com. As for how Iraqis felt about the general state of affairs in Iraq, 58% called it “very good” or “quite good,” up significantly from 43% last year and 22% in 2007.

When asked what their concerns are today, Iraqis sound a lot like Americans: Jobs and prices are at the top of their list — not war, not security, not terrorism.

In short, it sounds like we not only won the war, but the peace as well. And for those who cast a skeptical eye on the idea that any Islamic country could ever be democratized, it turns out the former President Bush is winning that debate too.

With President Obama in the middle of withdrawing troops from Iraq on a schedule that looks suspiciously identical to the one that Bush had in place, it’s safe to say that Obama increasingly sees the wisdom of what his predecessor tried to do in Iraq.

I seriously doubt President Obama actually sees the wisdom of former President Bush’s decisions on Iraq. He doesn’t even admit that he was wrong to oppose the surge, in hindsight. And during his Camp Lejuene speech, he gave the obligatory “thanks to the troops” line; but couldn’t take a moment to give George W. Bush his due; Barack Obama has mesmerized the masses into the belief that he is gracious and capable of rising above partisan politics. But his actions time and time again are proving him to be anything but a man of class and a president of unity who will govern from the center.

And he continues to deceive and continues to play shell-games and set up strawmen arguments with the American public. Yet somehow it’s Bush who lied? Bush who deceived us?

Whatever happens to Iraq from this moment on is in God’s Hands. President Bush did his part; and in the twilight of his presidency, accomplished his final mission: Success and victory in Iraq.

Meadows coffee fetcher is a grundune who lied under oath