As Hillary cozies up to China on behalf of her boss, Obama, in order to keep the currency flowing into the US, the Chinese themselves have been emboldened in aggression. That is if you can consider Chinese vessels harassing an unarmed US surveillance ship, manned by a hefty crew of civilians, “emboldened”. Cowardly is the first description that pops into my mind… schoolyard bully stuff. 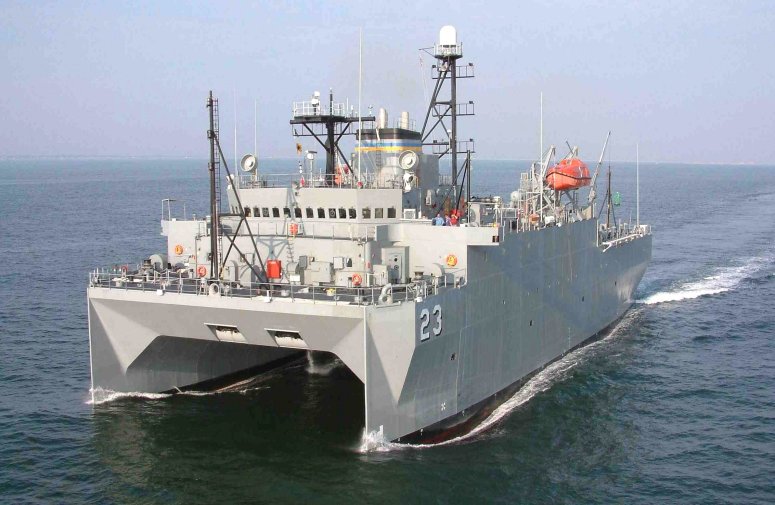 The Pentagon reports that five Chinese vessels stalked the USNS Impeccable while in international waters… approaching within 25-50 feet of the ships hull, moving into it’s path, attempting to snag the LF sonar equiment, and throwing debris into the water.

The Pentagon said Monday that Chinese ships harassed a U.S. surveillance ship Sunday in the South China Sea in the latest of several instances of “increasingly aggressive conduct” in the past week.

During the incident, five Chinese vessels “shadowed and aggressively maneuvered in dangerously close proximity to USNS Impeccable, in an apparent coordinated effort to harass the U.S. ocean surveillance ship while it was conducting routine operations in international waters,” the Pentagon said in a written statement.

The crew members aboard the vessels, two of which were within 50 feet, waved Chinese flags and told the U.S. ship to leave the area, the statement said.

“Because the vessels’ intentions were not known, Impeccable sprayed its fire hoses at one of the vessels in order to protect itself,” the statement said. “The Chinese crewmembers disrobed to their underwear and continued closing to within 25 feet.”

After the Impeccable alerted the Chinese ships “in a friendly manner” that it was seeking a safe path to depart the area, two of the Chinese ships stopped “directly ahead of USNS Impeccable, forcing Impeccable to conduct an emergency ‘all stop’ in order to avoid collision,” the statement said.

“They dropped pieces of wood in the water directly in front of Impeccable’s path.”

The Pentagon reports this is one of the most aggressive incidents they’ve seen in some time, and the US Embassy in Beijing lodged a formal protest with the Chinese government. The Chinese have refused comments.

This is the third of similar incidents over the past week.

The Pentagon cited three previous instances of what it described as harassment, the first of which occurred Wednesday, when a Chinese Bureau of Fisheries Patrol vessel used a spotlight to illuminate the the ocean surveillance ship USNS Victorious.

In that incident, which occurred about 125 miles from China’s coast in the Yellow Sea, the Chinese ship “crossed Victorious’ bow at a range of about 1,400 yards” in darkness without notice or warning. The following day, a Chinese Y-12 maritime surveillance aircraft conducted 12 fly-bys of Victorious at an altitude of about 400 feet and a range of 500 yards.

The next day, a Chinese frigate approached Impeccable “and proceeded to cross its bow at a range of approximately 100 yards,” which was followed less than two hours later by a Chinese Y-12 aircraft conducting 11 fly-bys of Impeccable at an altitude of 600 feet and a range of 100 to 300 feet, the statement said.

“The frigate then crossed Impeccable’s bow yet again, this time at a range of approximately 400-500 yards without rendering courtesy or notice of her intentions.”

And on Saturday, a Chinese intelligence collection ship challenged Impeccable over bridge-to-bridge radio, “calling her operations illegal and directing Impeccable to leave the area or ‘suffer the consequences,’ ” the statement said.

The USNS Impeccable is an Ocean Surveillance Ship, part of the Military Sealift Command’s (MSC) Special Mission Ships Program. Most special mission ships are operated by civilian mariners who work for private companies under contract to MSC. The Impeccable, launched in 1998, and delivered to the Navy in 2001, deploys LF passive sonar while underway, requiring a combined crew of merchant marines, surveillance towed array sensor system operations (SOC) technicians, and U.S. Navy sonar technicians.

At the time of the incident, the Impeccable was sited about 75 miles south of Hainan, China… well outside any possible claim by China for territorial waters.

As the US economy remains fragile, and the Obama administration’s lofty ambitions require vast spending and borrowed money, I expect we can see increased flexing of Chinese muscles in our future.