Sunset Before Signing: The Transparency of Another Obama Broken Promise 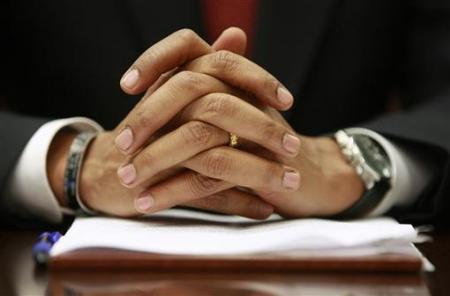 The hands of President-elect Barack Obama are seen as he speaks to the media following a meeting with members of his future cabinet and economic advisors at his transition office in Washington January 6, 2009.
REUTERS/Jason Reed

Sunlight Before Signing: Too often bills are rushed through Congress and to the president before the public has the opportunity to review them. As president, Obama will not sign any non-emergency bill without giving the American public an opportunity to review and comment on the White House website for five days.

Byron York sheds some light on how “the era of transparency” is anything but:

“Sunlight Before Signing” faded into darkness with the first bill that came across Obama’s desk. The new president signed the Lily Ledbetter Fair Pay Act two days after it was passed by Congress — and without posting it on the White House Web site.

Then he signed the second bill of his administration, an update of the State Children’s Health Insurance Program, within hours after Congress passed it.

Both signatures clearly violated Obama’s campaign promise. Questioned by reporters, White House officials said they were “working out a series of procedures” to handle newly passed legislation. “We’re working through the technicalities of how that happens, and we’ll get a process together,” spokesman Robert Gibbs told the press last week.

As Gibbs spoke, the massive economic stimulus bill was racing through Congress, and the spokesman stressed that Obama’s campaign pledge specifically exempted “emergency” legislation. “If we get this [stimulus] bill, this would certainly meet the president’s test of emergency legislation,” Gibbs explained. “And if we’re lucky enough to have it pass, we’ll sign it rather quickly.”

Then, late Friday, after House and Senate Democratic leaders moved heaven and earth to pass it, the bill was ready for the president’s signature. And did President Obama sign it rather quickly? Not at all.

Obama’s delay in signing the stimulus is particularly ironic in light of the fact that Republicans had begged that the public be given more time to learn what was in the $787 billion bill — before it was passed.

No, no, the White House and Democrats said. This is emergency legislation, and it must be passed as soon as humanly possible. Democratic lawmakers worked round the clock to produce a bill — the final copy had handwritten revisions on it — that could be voted on Friday evening.

And then, when Senate Democrats knew they didn’t have the 60 votes necessary to move the legislation forward — the ailing Massachusetts Sen. Ted Kennedy had gone to Florida, and Ohio Sen. Sherrod Brown was at home attending a wake for his mother, who had died a few days earlier — Majority Leader Harry Reid took the extraordinary step of extending the vote for hours. The voting period, which normally lasts about 15 minutes, began at 5:30 p.m. Friday and ended only when Brown, his mother’s wake over, flew to Washington to cast his vote at almost 11. Then Brown immediately flew back to Ohio for his mother’s Saturday funeral.

It was a nearly unprecedented stretch of the rules. Republicans, knowing they didn’t have the votes to stop the bill and planning to spend the Presidents Day weekend in their home states, had agreed to Reid’s plan ahead of time. But why was there such a rush, if Obama had no plans to sign it for days?

Go back to “Sunlight Before Signing.” In the case of the stimulus, there was never any doubt Obama would sign the legislation. The period in which the public needed sunlight was before the bill was passed, not before it was signed. And that was precisely the kind of sunlight the White House and Democrats wanted to stop. Once they accomplished that with Friday’s voting gambit, Obama could take a few days off in Chicago while the “emergency” legislation sat on his desk. Then, it was on to Denver for the photo-op.

So this is “a new kind of politician” at work, ushering in a new “era of transparency” and ethics? “Change we can believe in”???

It’s not a lie if the MSM doesn’t report it.

I think the transparency is working! A lot of us can see right through this guy!

Is it me, or is BO wearing nail polish? It looks like pale pink polish on his nails.

He has his own motifs obviously. But they are hardly evil. Can we wait for the memory of Bush to fade before we start attacking Obama for no reason?

Can we wait for the memory of Bush to fade before we start attacking Obama for no reason?

Being a bold faced liar is reason enough.

Thanks for playing though.

very funny that the libs i have talked to all think that this is ok because all politicans lie and that he is doing much better at lying than bush did and he is honest in his lies. when i asked what honest in lying is it is when thay lie for the good of the people. call me crazy but i really don’t want to be lied to “for my own good”.

This shows he is transparent and all of us know all his actions.

I’ve finally figured the secret decoder ring the moonbats use to understand Obama.

He really means to do the opposite of what he says. It’s that simple. You just take the ring, twist the words he says until they mean the exact opposite thing, and bingo! You understand! This ring can be your for only 19.99! But wait! There’s more! Call in the next five minutes and I’ll double your offer. You get two, that’s right two, Obama secret decoder rings for $19.99! Call now! And tell ’em Billy sent ya!

But of course Obama claims this was emergency legislation. Which only raises the question of why he left town for three days after it was passed.

2. Make it “impossible” for Congressmen to slip in pork barrel projects.

3. Meetings where laws are written will be more open to the public. (Even Congressional Republicans shut out.)

7. We will put every pork barrel project online.

Funny, but not one of Mr. Obama’s promises were met with the most expensive spending bill in our nation’s history.

Piece of shit lying scumbag Chicago thug politician with an overblown sense of intelligence. I can’t see to express my disdain adequately today.

The New American Socialist Regime has no ethical qualms, it only has an Agenda and the Opportunity to abuse the Public Trust until 2010 or longer as long as the American Voter allows it.

It’s really too bad President Obama couldn’t figure out a way to jettison these two [Reid & Pelosi] who are poster children for everything that is wrong in Washington.

Has Jack Cafferty lost his mind or is this just a contrarian view of the world. How long can he last at CNN writing stuff like this ?