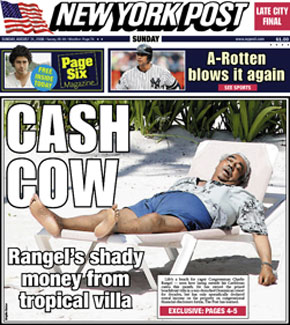 What’s the odd’s this lackadasical investigation would be occuring if the the accused had a R next to his name? (h/t Macsmind)

The panel created on Sept. 24 to probe the Harlem Democrat’s alleged ethical lapses has been virtually disbanded, after meeting only twice in four months on the matter, The Post has learned.

Of the four congressmen named to look into the powerful Ways and Means Committee chairman, only one remains – Alabama Republican Jo Bonner. The three others left the Rangel probe last month when they were “rotated” off the 10-member Committee on Standards of Official Conduct.

The dormant investigation won’t be jump-started until three incoming ethics committee members are assigned to the Rangel probe later this month.

Because the committee conducts its work in secret, it is not clear if any progress has been made on the Rangel investigation. In the committee’s recently released 100-page report on its work in the 110th Congress, only four paragraphs mention the Rangel probe, listing five alleged ethics breaches and noting that the panel had not been able to complete the investigation.

The probers should have been required to stay on the investigation to avoid further delays, said Ken Boehm, chairman of the National Legal and Policy Center, an ethics watchdog group.

“Four months after the investigations started, there is no investigative subcommittee, no public hearings, and no sign of any progress whatsoever,” he said.

Critics also wonder why the panel has not officially taken up alleged ethical issues recently uncovered by The Post, including the 78-year-old congressman’s use of a tax credit on his DC home while he was living in New York, and his attendance at Caribbean junkets sponsored by lobbyists. Also missing are allegations that Rangel solicited donations from insurance giant AIG for his City College center.

He’s the gift that keeps on giving, but the Democrats and the MSM are doing it’s best to keep it outta sight, outta mind.