The Era of “Transparency” has Begun! 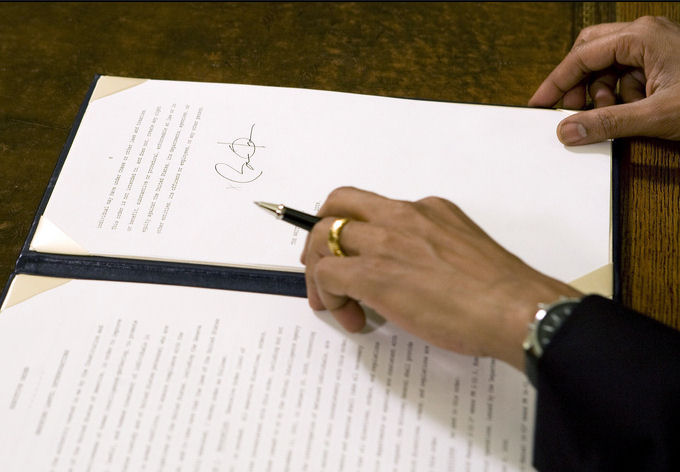 Obama signed executive orders fulfilling his pledge to end what he has called torture and to abolish the Guantanamo facility that became a lightning rod for international criticism. His action drew praise from human rights groups as well as politicians and statesmen around the globe.
Larry Downing-Reuters

could there actually be some light at the end of the tunnel?
[truncated]

Most politicians would rather do anything than make a difficult choice, and it seems President Obama hasn’t abandoned this Senatorial habit. To wit, yesterday’s executive order on interrogation: It imposes broad limits on how aggressively U.S. intelligence officers can question terrorists, but it also keeps open the prospect of legal loopholes that would allow them to press harder in tough cases.

The unfine print of Mr. Obama’s order is that he’s allowed room for what might be called a Jack Bauer exception. It creates a committee to study whether the Field Manual techniques are too limiting “when employed by departments or agencies outside the military.” The Attorney General, Defense Secretary Robert Gates and Director of National Intelligence-designate Dennis Blair will report back and offer “additional or different guidance for other departments or agencies.”

In other words, Mr. Obama’s Inaugural line that “we reject as false the choice between our safety and our ideals” was itself misrepresenting the choices his predecessor was forced to make. At least President Bush was candid about the practical realities of preventing mass casualties in the U.S.

This Executive Order is merely to throw a plastic bone to the Code Pink-minded chomping for the real deal; and signal to the critics abroad that “change has come” to Washington.

CJ did the leg work the executive order and points to the following:

there really aren’t any differences between the way the Bush administration is treating the facility and the Obama administration. Allow me to interpret the entire order for you paragraph by paragraph if you still don’t desire to travel to the White House page and read it yourself.

Section 1) Just a bunch of definitions of words everyone understands that are used throughout the EO.

Section 2a) The DoD has identified individuals that can be released. Well, this identification didn’t happen in the past four days, so obviously this is what the Bush administration was already pursuing.

2b) Some of these guys have been there for a long time (Khaleed Sheik Mohammed for one) and that it would be in our best interests to send them home and close the facility….“To the extent practicable”!! What does this mean? It means that, exactly as the Bush administration was doing, we’ll close the facility when we no longer need it. Those four little words provide a HUGE out for the administration that would prevent them from closing the facility.

2c) Terrorists are entitled to our constitutional rights of a trial. I’ve already addressed this above, but here’s another angle. Habeas corpus could easily be suspended in times of national emergency. I think a nation going to war is a perfect time for such an action as it relates strictly to enemy combatants. It’s not unprecedented either.

During the Civil War, President Obama’s hero, Abraham Lincoln, suspended habeas corpus until the end of hostilities with the Southern States. In World War II, when the Supreme Court wasn’t occupied by activist judges, the Court ruled that unlawful combatants were not entitled to habeas corpus and would be tried by military courts as we’re doing today. This created a very specific distinction between prisoners of war and unlawful combatants. But, because our government today wants to play nice with terrorists and lacks the backbone necessary to fight the kind of enemy we face today, we decide to try them in our courts instead of looking to history for the answers and educating the public on those answers.

2d) The cases of all detainees being held at Gitmo will be reviewed to determine the basis for their detention. Again, something that is an ongoing aspect of these detentions and was done under the Bush Administration.

2e) If we release these terrorists, our enemies will like us and be more likely to talk to us through diplomatic means. Okay, this is a departure from the Bush administration thinking.

2f) Some people at Gitmo are bad. We may not want to release them. Yup, exactly what the Bush administration was thinking. Nothing new here.

2g) Again, it’s a good idea to review these detentions, just like the Bush administration was doing.

Section 3) In one year, we will close Gitmo but we have no idea what to do with any bad guys we may still have at that time. This gives the administration a year to realize we’re screwed and better sign another EO extension.

4c) This paragraph establishes what this group of individuals will do, namely exactly what the Bush Administration was doing.

Section 5) Secretary Clinton will try to convince foreign governments to take the terrorists we’re trying to get rid of. Most likely the same countries President Bush tried to convince when he was in charge.

Section 6) Detention facilities must meet the humane requirements set forth in the Geneva Conventions – as they did under the Bush administration.

Section 7) Military courts and commissions are hereby halted until we figure out what we’re doing. The detainees will just sit there until we get our act together.

Section 8a) Secretary Gates can continue business as usual with all other prisoners not being held in Gitmo.

8b) If anything written in this order goes against the law (or constitutional treaties like the Geneva Conventions) or we don’t have the money to pay for it, forget what I just signed. Have a nice weekend!

8c) This order does not create rights that didn’t exist before. Does this mean that the prisoners DON’T have the right to use our courts then?

What this all boils down to really is smoke and mirrors. It really just tells the Defense Department that we better be doing things right or we’re in trouble. There are so many exceptional situations written into the order that it doesn’t really mean a lot. President Obama is devoted to ensuring that we’re abiding by the Geneva Conventions but the media and our political leaders aren’t telling us the whole story. They’re keying in on one or two sentences and trying to convince the American people that “change” has come when really there is very little changing. 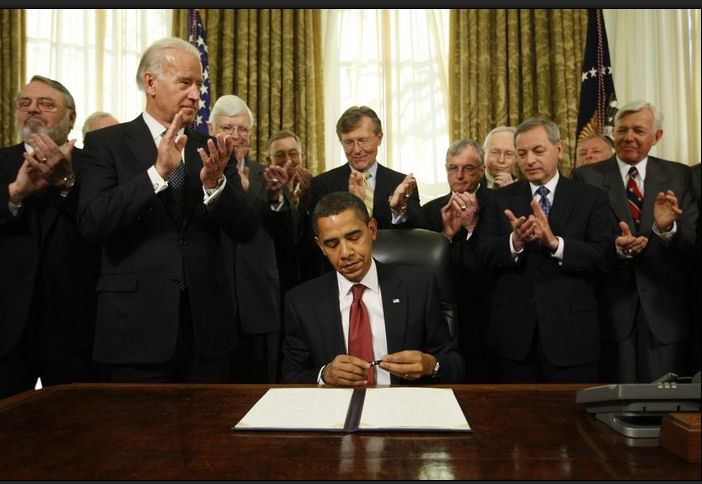 President Barack Obama caps his pen after he signed an executive order closing the prison at Guantanamo Bay, in the Oval Office of the White House in Washington. Vice President Joe Biden, second from left, and retired military officers applaud.
Charles Dharapak-AP