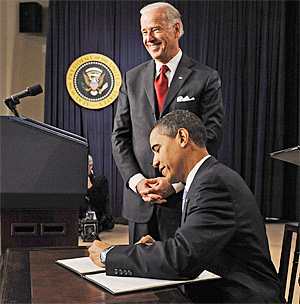 On the very first day in office, the new administration announced it would rescind the ‘Mexico City policy’ Thursday. (This banned tax dollars from going to non-governmental agencies that perform abortions.)

Thursday is the anniversary of Roe vs. Wade, when thousands of Pro-Lifers annually descend on Washington for the March for Life.

So, it is “above his pay grade” to decide what human life is, but he can use MY TAX DOLLARS to kill human life without bothering his conscience a wit. That is the logic of Goebbels, not Lincoln or anyone else.

Further, how is this any big “change” from the same old confrontation we’ve always had? This is what Clinton did too with the same “in-your-face” timing. Obama had a great opportunity here. What a chance to be truly different. Sad to say, I knew this would happen. Obama tipped his hand early on that his mind and heart are the most radically pro-abortion of anyone who has ever entered the Office.

Poor John Adams! He said: “I pray heaven to bestow the best of blessings on this house and all that shall hereafter inhabit. May none but honest and wise men ever rule under this roof.” It seems the noises Obama made about “change” and ‘reaching out’ do not apply to me and so many like me, and, in my opinion, that is neither honest nor wise.